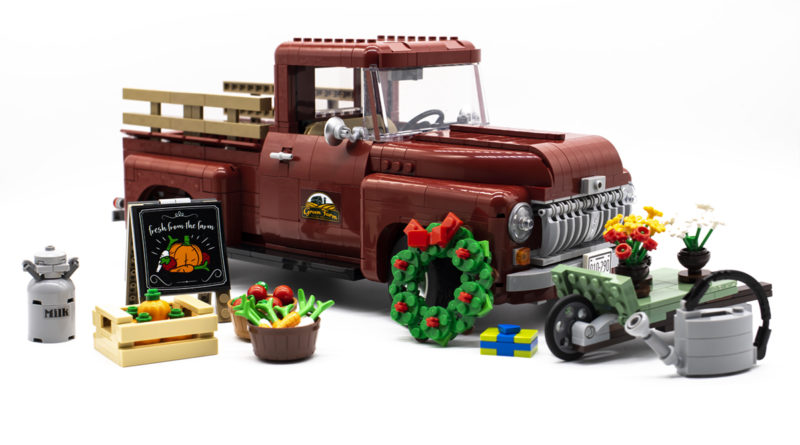 LEGO For Adults 10290 Pickup Truck takes us on a journey through the seasons in the LEGO Group’s first unlicensed Creator Expert vehicle.

The LEGO for Adults design team typically replicates a specific make or model of a given vehicle, be it a Porsche 911, a Harley-Davidson Fat Boy, an Aston Martin DB5 or another equally iconic ride. But this particular pickup truck isn’t based on any one specific model – instead, it’s an interpretation of what a pickup truck from the 1950s would have looked like.

Farming is something that isn’t particularly common with LEGO sets, which makes this feel fresh and unique in the portfolio – but with no blueprint to work from with regards to the actual model, will we still see the same high level of detailing, authenticity and inventive building techniques we’ve become accustomed to over the years?

A total of 1,677 pieces are spread throughout 12 bags, numbered one through eight. These are used to construct the dark red pickup truck, as well as the various seasonal paraphernalia that accompanies it.

Despite this particular truck not being based on any real-life vehicle, the designers still spent hours researching and studying similar trucks of the 1950s. There is a certain aesthetic that the designers had to get right, and some aspects, such as the rounded shapes along the bonnet and wheel arches, proved to be a real challenge.

However, not only have they managed to accomplish a brilliant model through skillful parts usage and inventive building techniques, the entire set also transports you back in time.

It’s not often we can say a LEGO set based on a single vehicle tells a story, but 10290 Pickup Truck does just that. From the various produce that takes the set through the seasons to the beautifully-designed graphics showing the farmhouse vanishing in the rearview mirror, at almost every stage there’s some element of the build that plants you firmly in the 1950s.

Usually we would begin these reviews by saying ‘as with all large-scale vehicles, the build begins with the construction of the chassis’, but instead this time around the build actually begins by assembling the four different seasonal accessories that accompany the truck.

Even though they appear simple, there are some really nice touches throughout. Spring sees fresh flowers, sitting atop a smart wheelbarrow that uses a relatively new 3×2 modified plate with cut-out (first used in the LEGO Super Mario theme), coupled with a delightfully-designed watering can.

For summer there’s fresh milk, tomatoes and carrots, both orange and white varieties (a first appearance for the latter). Autumn’s produce comes in the form of a very authentic basket filled with pumpkins, and for winter there’s a small present and an extremely well-crafted wreath. They add a nice touch of character to the truck and also help tell a story, which is quite an impressive feat considering this is just a single vehicle with no minifigures.

Assembling these accessories is an enjoyable and at times ingenious process and really, that’s what this set is all about. The build for the truck is absolutely rammed with moments of pure brilliance, unique techniques, wonderful parts usage and above all enjoyment from start to finish.

While no new parts have been designed for this set, many are appearing in dark red for the first time. The spoiler plates, 2×2 rounded bricks (essential for creating the authentic curves) and the large 10x2x2 curved slopes are all put to fantastic use throughout the build.

The opening doors and engine, which can be accessed by popping the bonnet, are all wonderfully smart, even if the doors do feel a little stiff when compared to similar models. The engine is compact yet uses myriad unusual parts, including a small propeller and a black hot dog, to achieve a realistic and detailed aesthetic. The sand green spread throughout complements the dark red of the truck really nicely too.

The curved, rounded shaping of a 1950s pickup truck proved to be the hardest things for the designers to get right, but however arduous the journey may have been for them, it was well worth it. It looks fantastic and entirely evocative of the era, but more than that is a total joy to put together.

A combination of 2×2 rounded bricks and 1×2 curved slopes create beautifully smooth lines around the edges of the bodywork; the upside-down building techniques used to construct the sub-assembly that makes up the front wheel arches is ingeniously achieved; the use of light grey barbs to represent the front engine grilles is particularly inspired; and the rear wheel arches are split into two smaller sub-assemblies that clip into place rather than attach through more conventional means.

The whole build for the cab is an equal display of intelligent design and satisfying techniques. The interior of the cab features plush leather seating, a steering wheel, a moving gear stick and a printed dashboard with speedometer and fuel gauge.

Like every section of this build, the flat bed comes together beautifully. The detachable panels are befitting of the vehicles of this time, as well as adding a small level of customisation to the display options of the model – and the way the fence panels slot into the gaps created by the spoiler elements is just so satisfying.

The tailgate swings open thanks to the use of two 2×3 tiles with clips, and is finished with a LEGO logo printed tile. The rest of the livery comes from stickers rather than printed pieces, but they are all equally well-designed. The Green Farm logos on each side of the truck’s doors look wonderfully authentic to say they’re wholly original, and the sticker used for the rearview mirror is not only a great touch, but further adds to the storytelling of the set.

Minifigures are never usually included within LEGO for Adults large-scale vehicles and 10290 Pickup Truck is no exception. However, a lot of character is added to the set thanks to the seasonal produce that accompanies the truck: a wheelbarrow full of spring flowers, baskets of tomatoes and carrots and a can of fresh milk for the summer, a crate of pumpkins during the fall and a winter wreath and wrapped present for the festive period.

10290 Pickup Truck is priced in accordance with similar sets that have come and gone, but it does have a larger piece count than most at this price point – probably thanks to the lack of a licence – and also comes with those brilliant brick-built accessories.

The overall build is incredibly entertaining and the final model looks fantastic, too. With all that in mind, this is actually one of the most reasonable sets of this style on the market, offering great value for money.

10290 Pickup Truck is a brilliant addition to the LEGO For Adults garage. It’s a more sedate ride than the usual supercar offering, but it’s no less enjoyable. Because this model isn’t based on any one particular make of pickup truck, the designers have a level of freedom that allows them to create a LEGO set that’s born out of their imagination. It feels refreshing and unique, but also displays a high level of skill and design knowledge in order to achieve the final look.

It looks great on display, is incredibly fun to put together and is practically devoid of any negatives. If LEGO for Adults cars are your thing then you certainly won’t be disappointed with everything that’s on offer here. It’s not the most iconic of cars in the theme, but the brilliance of the build and the overall charm of the set more than makes up for it.

How long does it take to build LEGO for Adults 10290 Pickup Truck?

10290 Pickup Truck will probably take around three to four hours to construct, but is such an enjoyable build that you will want to make it last as long as possible.

How many pieces are in LEGO for Adults 10290 Pickup Truck?

How much does LEGO for Adults 10290 Pickup Truck cost? 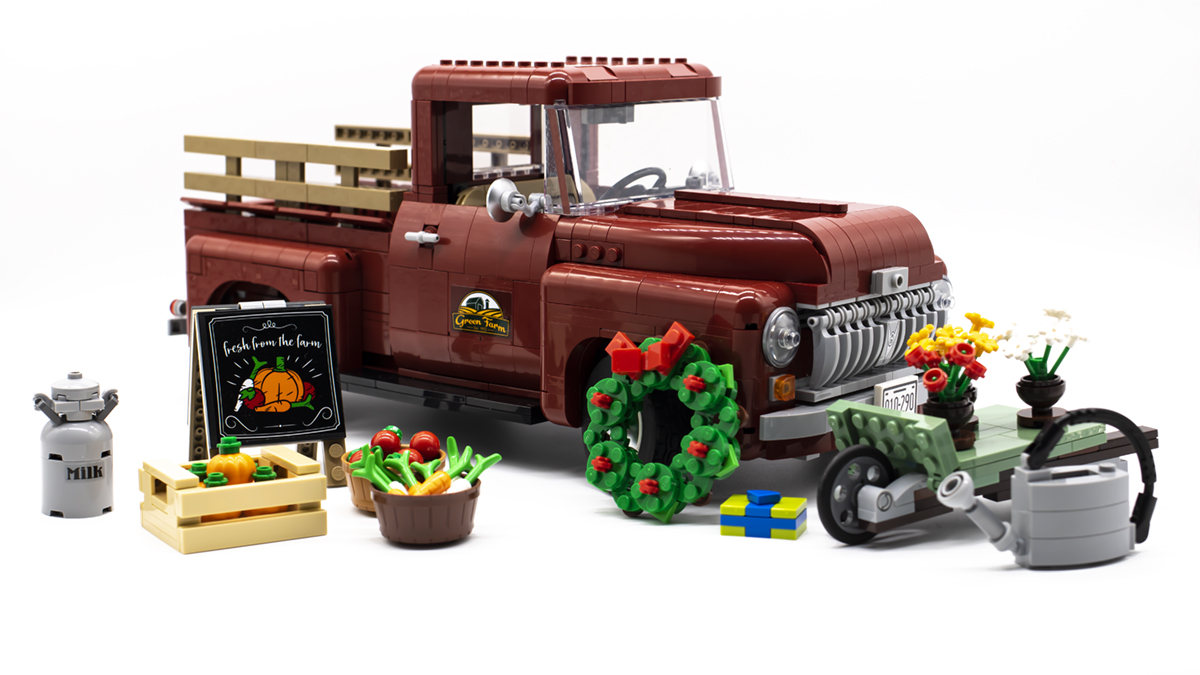