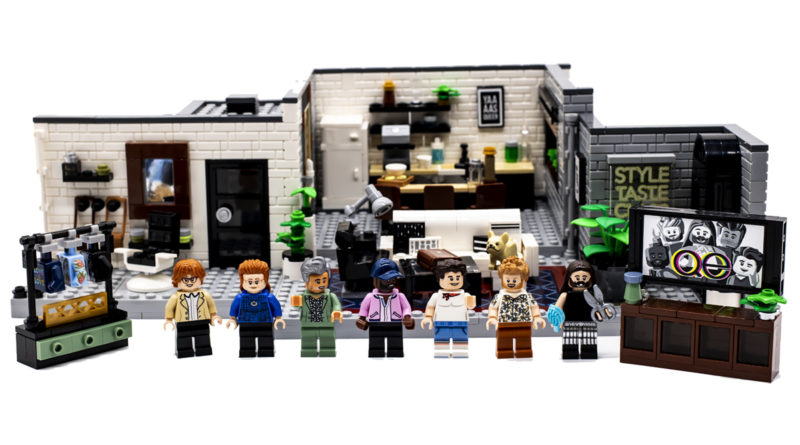 Just like the Netflix show’s motto, LEGO for Adults 10291 Queer Eye – The Fab 5 Loft is a set that epitomises style, taste and class.

The success of and positive response to 40516 Everyone is Awesome earlier in 2021 paved the way for LEGO sets designed to appeal to a predominantly LGBTQIA+ audience, but 10291 Queer Eye – The Fab 5 Loft takes it one step further by offering fans a substantial set that is more than just a display piece.

The Netflix TV show is a reboot of a series first broadcast in 2003, which featured a group of gay professionals – called ‘the Fab Five’, each of whom was an expert in fashion, food, well-being, design and personal grooming – who would make over (or as the show puts it, ‘make better’) a straight guy, giving him advice on all aspects of his life and transforming him into the very best version of himself. Fast forward to 2018, and the show was rebooted on Netflix with a brand new Fab Five, broadening the format to feature both men and women getting the ‘make better’ treatment.

Queer Eye is one of those TV shows that’s not only incredibly entertaining, but also inspirational and uplifting. Celebrating diversity and encouraging people to become the best version of themselves is an ethos that doesn’t feel a million miles away from the LEGO Group’s own values.

10291 Queer Eye – The Fab 5 Loft feels like a set that embodies all that’s good about the show. It’s stylish, it’s a bit silly, it’s ridiculously camp – but above all, it’s joyous and feel-good from start to finish.

The reboot of Queer Eye has now run for five seasons, with a sixth on the way. The apartments have changed throughout each series, but this model is based mostly on the one that featured in the first season.

The start of the build sets the tone brilliantly for what’s to come, with multiple sub-assemblies that employ smart techniques and demonstrate incredibly clever parts usage. For the majority of the set you’ll be building modern items of furniture that will eventually be spread around the incredibly-stylish apartment.

Within the very first few stages, you’ll construct a contemporary salon chair using a white 2×4 vehicle mudguard; a clothes rack complete with a variety of highly-fashionable and brilliantly-designed torsos (more on these later); the Fab Five’s giant television screen, an important format point of the show; and the Fab Five’s large couch.

Much like the recent 21328 Seinfeld and 10292 The Friends Apartments, the sofa is built as a separate assembly that can be lifted in and out of the main build. It’s become almost a mainstay of these apartment-style sets, and it’s a brilliant way to display a part of the model when space is limited. As well as the L-shaped couch, this area also includes a coffee table, desk lamp, side table and leather recliner. The techniques used are excellent, and almost have an Ideas quality to them (something that was sometimes lacking from 10292 The Friends Apartments, and to some degree 21328 Seinfeld, too).

The tops of studs are attached to 1×1 round tiles with pins to secure the television screen; a light grey minifigure posing stand is used as the bottom of the desk lamp; and black 1×2 bricks with log profiles are flipped on their side to recreate the rolls on the leather chair. It all makes for a really creative and enjoyable start to the set, which continues throughout the entire build. Even the plants that are spread around the apartment are brilliantly executed. Several plant pots are built from 1×1 tiles with pins attached to upside-down 1×1 round tiles with flower edges, with a 4×4 cone being flipped over to create a much larger pot.

Each area of the apartment is befitting of each one of the Fab Five’s individual skill sets. While a few of the brick-built areas aren’t present in the actual on-screen apartment, they still feature within the show and so feel relevant and appropriate. There’s fan-favourite and grooming expert Jonathan’s beauty area, a fully-stocked kitchen for food expert Antoni, a styling station for fashionista Tan and an ideas board for design guru Bobby, while life coach Karamo comes armed with his trusty laptop and polaroids.

Each of these areas exudes style and class, creating one of the most sophisticated and mature interior spaces the LEGO Group has ever produced. The white metro tiles on the back wall (hello, white 1×2 masonry bricks), the kitchen island (featuring printed 2×4 grille top tiles), the butler sink, the cabinets and the décor all look excellent, as well as being highly authentic to the show’s on-screen apartment. The printed parts and stickers also go a long way to recreating the ultra-modern and contemporary feel. The iconic ‘Style, Taste, Class’ sign and Fab Five logo are both featured alongside sophisticated cushions, posters and decorations.

A television series based around transformations wouldn’t be complete without a spectacular makeover, and this set is no different. At the back of Jonathan’s salon is a makeover station, complete with various outfits, wigs and accessories to help find the perfect look. LEGO for Adults sets aren’t always known for their play features, but 10291 Queer Eye – The Fab 5 Loft has a fabulous one: a ‘before and after’ transformation chamber (using splat gears) allows for minifigure makeovers to occur right in front of your eyes.

Much like the rest of the set it’s a real joy to put together, and is pure fun to operate. (Hands up if you’re already planning to place Anakin Skywalker and Darth Vader into the revolving chamber for the ultimate makeover from a galaxy far, far away.)

As good as the build is, it’s the accessories that completely elevate this set into something that’s incredibly desirable. Ten unique torsos, nine legs, eight hairpieces, caps, utensils, purple handbags, laptops, phones, books, pots, pans and more are spread across every section of the apartment. It’s a real treat being able to mix and match all the various looks and styles among the seven minifigures, and it also gives those who are interested in creating custom minifigures so many new options to add to the collection.

With only 974 pieces, the build is over quicker than a lot of similar sets that are currently on the market – but the elegance and style with which 10291 Queer Eye – The Fab 5 Loft comes together more than makes up for it. After all, it should always be quality over quantity.

As expected, the Fab Five (the cast’s collective nickname) are represented in minifigure form, but rather unexpectedly three of them come with multiple outfits to wear. It’s a fantastic and surprising touch that adds so many customisation options when it comes to displaying 10291 Queer Eye – The Fab 5 Loft. The LEGO design team have also done a phenomenal job in recreating the Fab Five’s looks and personas in minifigure form. They are all instantly recognisable, and there isn’t a weak minifigure among them.

Antoni Porowski’s printed neckerchief on his white t-shirt is a fabulous design choice, and the ‘Rebuild the World’ printing on his alternative torso is just brilliant. Jonathan Van Ness and Karamo Brown also have alternative torsos – Karamo’s patterned jacket is excellent, but Jonathan’s ‘Love is Love’ jumper is the definite highlight, and probably the best torso in the entire set.

Matthew Ashton teased that the new quiffed hairpiece that featured in 40516 Everyone is Awesome would also be used in another set, and here it is in striking silver, used to recreate Tan France’s trademark hairstyle. The silver speckles printed on to his face are another brilliant touch too. Bobby Berk’s minifigure is the plainest out of the five, but his patterned torso still feels very unique.

Where most sets that are based upon a television series are centred around fictional characters, Queer Eye’s contributors – or ‘heroes’, as they are known throughout the series – are real people, all of whom are core to the show’s very existence. It therefore only feels appropriate that one of the heroes is included within the set too, in the form of Kathi Dolley, who was featured in one of the show’s most emotional and poignant makeovers in Season 4.

Kathi comes with both her ‘before and after’ looks, complete with an incredible mullet hairpiece. It’s yet another fantastic touch within the set, and for Kathi it must be quite an honour to be immortalised as a LEGO minifigure. Finally, as a fitting tribute to the Fab Five’s late canine companion Bruley (the French bulldog that featured throughout much of Series 3), an adorable French bulldog animal piece is also included.

The LEGO Group isn’t making it easy for reviewers at the moment, with pricing info for many of its sets not shared until they’re officially revealed – and such is the case for 10291 Queer Eye – The Fab 5 Loft.

Based on rumours, though, we’re expecting it to fall somewhere around the £80-£90 mark in the UK, and likely $99.99 in the US and €99.99 in Europe. It contains fewer pieces than 10292 The Friends Apartments or 21328 Seinfeld, but the abundance of printed parts, minifigure parts and accessories should justify a slightly higher price tag than the latest Ideas set.

Update: The price has now been confirmed as £89.99 / $99.99 / €99.99, which means our comments above all still stand. It’s an expensive entry price next to 21328 Seinfeld, but justified through its prints and minifigure parts and accessories.

Let’s be honest: 10291 Queer Eye – The Fab 5 Loft probably wasn’t high on many LEGO wish lists, nor indeed a set anyone expected or even asked for (the LEGO Group’s Vice President of Design Matthew Ashton notwithstanding). However, what we’ve been presented with is something that’s not only a joy to put together, but is also the most stylish apartment model currently available in the LEGO catalogue.

It not only looks great, but is so jam-packed with accessories, minifigure outfits, hairpieces and furniture that fans of customising their LEGO will have a field day with everything on offer. The ‘Love is Love’ and ‘Rebuild the World’ prints on the torsos are sure to be especially desirable to collectors.

Between this set and 40516 Everyone is Awesome, the LEGO Group should also be commended for delivering sets first and foremost for an LGBTQIA+ audience, demonstrating how progressive and forward-thinking it is as a company. And even though the set is designed for a more mature fan base, it will no doubt spark conversations between older and younger fans about inclusivity, acceptance and diversity too.

But even more than that, the love, attention to detail and authenticity that has gone into this set makes this a real surprise package – and even if you’re not a fan of the television series there’s enough here to make this a fantastic LEGO set in its own right.

Everything about 10291 Queer Eye – The Fab 5 Loft feels as though it’s captured both the spirit of the television show and LEGO itself: it’s fun and a little bit silly in places, but ultimately leaves you with a huge smile on your face.

Support the work that Brick Fanatics does by ordering your copy of 10291 Queer Eye – The Fab 5 Loft using any one of our affiliate links. Thank you!

10291 Queer Eye – The Fab 5 Loft isn’t the largest of sets and comes together fairly quickly. There are 10 bags, numbered one through five, and working your way through these will probably take around three hours.

There are only 974 pieces within 10291 Queer Eye – The Fab 5 Loft, but what the set might lack in piece count it more than makes up for in an abundance of minifigure parts and accessories.