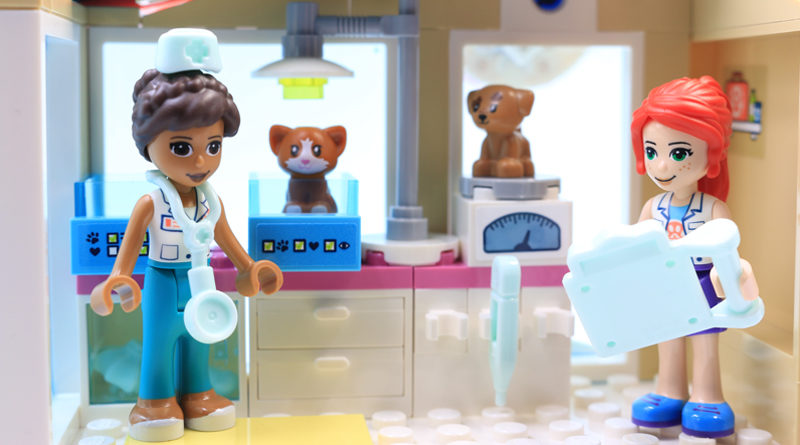 Animals abound in 41446 Heartlake City Vet Clinic, including a brand new horse – but is there more to this LEGO Friends set than just its patients?

With animals comes the unpredictable nature of creatures who just like to do whatever they want, and it’s the humans who have to deal with the consequences – from thinking that a bee is a tasty snack, to the scrapes and sprains pets can get just from going a bit too crazy in the garden. In 2019, over £4.8 billion ($5.5 billion) was spent by owners in the UK alone on veterinary services.

So, 41446 Heartlake City Vet Clinic should be in demand for the Friends crew, and it also features the introduction of the brand new LEGO horse mould. With pets galore, is it all furry goodness, or does it leave you clawing for more?

Things start small, with the stretch of road made from a dark grey 6×10 baseplate. It might not look like much – it’s only a few different pieces – but it’s totally accurate. Around the coasts of the Pacific, turtles often lay their eggs on beaches that are intersected by roads, so the baby turtles need help to cross safely when they hatch. Volunteers will spend their nights making sure the baby turtles have a chance, which is the important role Mia is meant to play.

Unfortunately, things continue small. It seems the box size and art for 41446 Heartlake City Vet Clinic is a bit deceptive, with the clinic only covering an area of 8×20 studs across two baseplates. This is not a lot. Now, typically, size doesn’t matter when it comes to the Friends theme – even small sets can be detailed and fun. However, this one just feels cramped.

Most of the building is simply constructed from tan wall elements and large window frames, which makes for a quick build that’s not very engaging. It’s just a simple matter of stacking parts to give height. While LEGO buildings often take creative licence towards the accessibility of their interiors (stairs are optional), 41446 Heartlake City Vet Clinic doesn’t even make an attempt at realism, so the poor puppies have to teleport to the examination room.

There are some relevant details in the stable, including textured yellow 1×2 bricks for hay, along with a water tap attached to the wall. The new LEGO horse can fit inside, although it’s a bit of a squeeze. This new mould seems almost like Belville meets Friends, and it’s more realistic with a poseable neck and textured mane.

Almost every type of LEGO medical accessory can be found in the various drawers of the examination room, while there’s even a tiny reception desk on the ground floor. Yet these details almost seem half-hearted, paling in comparison to other Friends sets of a similar type, with far too much reliance on stickers. Practically more pieces go into the cute dog sign on the roof than throughout most of the interior.

Both Savannah and Donna are unique to this set, and it is so empowering to see a blind person being represented in the Friends universe. Savannah’s expression is printed with tinted glasses, and her guide dog is a really nice inclusion. It looks a lot like a yellow Labrador, which is the most common type of assistance dog due to their calm nature. Mia is then kitted up in a veterinary-inspired torso, which is impressively printed front and back with the paw-print logo that runs throughout the Friends animal rescue theme.

Alone, 41446 Heartlake City Vet Clinic is not particularly good value for money. It’s an easy build and the model lacks the fun details that encourage role play. Its one redeeming feature is all the characters included. Three mini-dolls and four animal figures make up a cast ready for young fans’ storytelling – but even then, the set isn’t really worth its full price tag. Fans interested in 41446 Heartlake City Vet Clinic might want to wait for a discount, or at least some double VIP points.

41446 Heartlake City Vet Clinic has a sound inspiration, but it needed at least another 100 or so bricks to flesh it out. Even the little fingers of young fans will find it tricky to access parts of the cramped interior, and the lack of details mean there’s not much to play with for that long. It’s a shame, because the animals and mini-doll characters are all amazing, but there are far better Friends sets available for a similar price.

Support the work that Brick Fanatics does by picking up your LEGO Friends sets using any one of our affiliate links.

How long does it take to build 41446 Heartlake City Vet Clinic?

You’re probably going to knock 41446 Heartlake City Vet Clinic together in only about 40 minutes. If young Friends fans want to build it, then that time might increase to over an hour, especially with the fiddly little stickers.

How many pieces are in 41446 Heartlake City Vet Clinic?

There are only 258 pieces in 41446 Heartlake City Vet Clinic, which isn’t that many when you take out the included mini-dolls and pets.

41446 Heartlake City Vet Clinic is 16cm high, 16cm wide (which is why it looks rather square) and 4cm deep. It is a compact building, so it doesn’t take up much space on a shelf.

How much does 41446 Heartlake City Vet Clinic cost?

Considering the relatively small piece count, 41446 Heartlake City Vet Clinic costs a surprisingly steep £34.99 / $39.99 / €39.99. This price is probably affected by the new parts for the horse, so it might be worth waiting for a discount from other LEGO sellers.