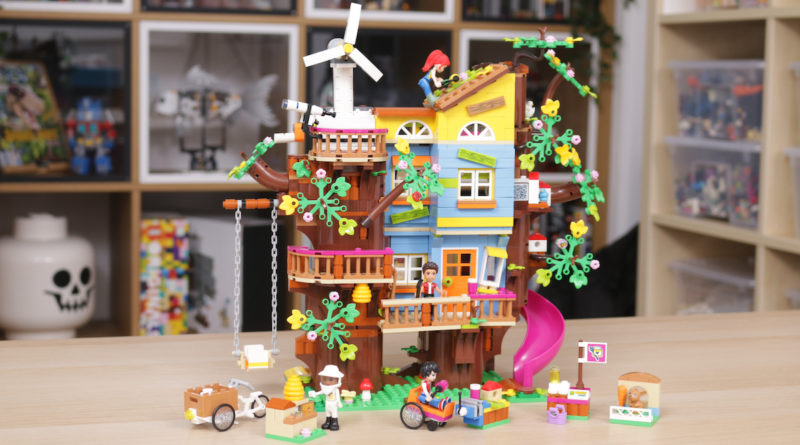 41703 Friendship Tree House represents a culmination of everything that LEGO Friends has created and shaped in the last decade.

Celebrating its 10-year anniversary in 2022, LEGO Friends is truly a theme like no other, and 41703 Friendship Tree House perfectly symbolises that – not only as a set purpose-built with various references to Heartlake City within it, but as a creation packed with colour, fun and some genuine intrigue.

LEGO Friends is a theme very clear in its character, storytelling and world-building, with everything well-defined within the multi-coloured, eclectic Heartlake City. As with CITY and NINJAGO, it clearly targets the younger demographic, meaning that within all the bright colours are relatively simple building techniques and final models.

Importantly, though, as the theme has developed over the past decade and more than found its feet, these simpler builds have become ever more charming and interesting, and the wave of releases that kicked off 2022 include some truly amazing and super-sized creations more than worthy of any older LEGO fan’s attention.

41704 Main Street Building, 41702 Canal Houseboat and 41703 Friendship Tree House are all sets that push the boundaries of concepts that LEGO Friends typically likes to explore, and the results are these vast and deep dives into territory that feels fresh and fun.

41703 Friendship Tree House is the one from that trio we have chosen to look at, in anticipation also of further super-sized, multi-colour creations coming in June. Specifically built with multiple references to the last 10 years of LEGO Friends as a theme, 41703 Friendship Tree House represents exactly how far the theme has come and hints at its potential heading into a second decade.

As a premise, 41703 Friendship Tree House is as the name suggests – a tree house! However, with over 1,000 LEGO pieces with which to build, this is an enormous, multi-level tree house with a lot going on, both front and back.

The first bag is a great example of what LEGO Friends does differently and so well, as you put together two of the mini-dolls and a number of side-builds. Instead of just providing mini-dolls with particular outfits, alternate heads to swap out for different expressions and accessories to hold (they do provide all this), these are characters that come with their own fully-realised narratives.

That first bag of side-builds establishes activity and story in just a handful of pieces – River comes with a work bench while Olivia has a beehive, till and bike for a neat little business venture selling honey (or, as one of those jars may suggest, bees – Olivia you need to work on your branding as it’s not clear). Where you are straight into building two of the five mini-dolls in 41703 Friendship Tree House, you are also very quickly establishing their story and giving them purpose within the wider context of this massive set. To achieve this with such straightforward LEGO building is where Friends has really mastered design.

The build immediately shifts gears into the tree house itself but with clear story elements dotted throughout, with a toilet built into the inside of a tree trunk and the base to the lift – both simple to put together but genuinely charming and creative. On from that comes the first splash of bright Friends colour, which later engulfs the rest of the set – while it’s a clear clash, the blue really pops in an inviting way that you can actually imagine these characters wanting to paint it. It’s fun, vibrant and really works to establish the mood of the entire set.

While that bright blue mixed with bright orange and lime green details works well for set identity, it perhaps does camouflage to more experienced builders the set’s design merits. What is still straightforward in construction to be accessible to the 8+ audience is still highly effective in application. The use of SNOT (Studs Not On Top) technique is carefully placed to add depth to the tree house walls, and to add details such as offset pieces of wood nailed to posts. These are just simple effects created from a now-common LEGO technique, but their impact and validity is clear from how specifically they’re used across the build.

Despite the bright colours and the fact that the build just won’t quit in adding more and more height, importantly there are just as many details and callouts that ground this within the ‘tree house’ concept. The living quarters are substantial and bright, but throughout the model are two gigantic tree trunks, with hints of various branches and elements of nature also dotted around. For what could so easily be a tree house dominated by the big blue house, the tree offers balance in tone and scale, serving as just as much a centre-point to the overall build.

That juxtaposition between nature and man-made construction is what so appeals about tree houses and is what is so nicely captured in 41703 Friendship Tree House too, making this such a nice-looking set to take in. Incidentally, it’s the same reason a well-realised LEGO Castle set can be so popular – what LEGO Friends has done with 41703 Friendship Tree House speaks to what could be possible with future LEGO Castle products. Our original intention with this set was to rebuild it as a Castle-themed set. Maybe we’ll still get around to doing that.

A stand-out feature to the set is the play mechanism that moves the wheelchair-friendly lift up and down the various levels of the tree house. Turning the mechanism not only moves the lift, but also turns a wind turbine at the top of the model. It’s a neat feature to include in the set, and certainly needed for just how high this thing measures. It also adds a sense of peril to the mini-dolls’ experience – it seems that whatever level they end up on is as much in the hands of a wayward gust of wind to that turbine.

Beyond that, everything packed into the tree house tells a story and gives life to the model in a way that just invites those mini-dolls in. The design team have clearly drawn up a list of everything that would make a dream tree house and managed to somehow bundle it all into 41703 Friendship Tree House, while still offering up enough floor space and practicality to the model to allow it all to breathe.

Despite LEGO.com claiming that there are five mini-dolls included in 41703 Friendship Tree House, we count the four – Mia, Olivia, River and Jackson. As a quartet (with pet bunny in tow), they are as nice and detailed in design as we have come to expect from LEGO Friends mini-dolls, with two of the characters also coming with alternate head pieces with different expressions.

41703 Friendship Tree House comes in at £69.99 / $79.99 / €79.99, which in providing you with 1,114 pieces and four mini-dolls represents really good immediate value. Beyond that, the amount of activity, colour and vibrancy that has been built into the set really brings it to life in a way that draws you in, if you have it just on display or it is built for play. The best LEGO sets do this and if they can offer so much for a relatively low price, there’s no criticising the value on offer.

Everything that a dream tree house should have is included in 41703 Friendship Tree House. This is a large and fun LEGO set to build, packed with colour, vibrancy, character and story that makes it one of the most inviting LEGO sets of recent times – you just want to touch it and play with it in so many ways, and there are so many ways to do just that.

There’s no better set to celebrate 10 years of LEGO Friends than 41703 Friendship Tree House, and to hint at the creative potential for the theme’s next 10 years.

Support the work that Brick Fanatics does by purchasing your LEGO Friends sets through one of our affiliate links.

How long does it take to build LEGO Friends 41703 Friendship Tree House?

It takes about an hour to put together 41703 Friendship Tree House across eight sets of numbered bags.

How many pieces are in LEGO Friends 41703 Friendship Tree House?

There are 1,114 pieces included in 41703 Friendship Tree House, along with four mini-dolls for Mia, Olivia, River and Jackson.

How much does LEGO Friends 41703 Friendship Tree House cost?