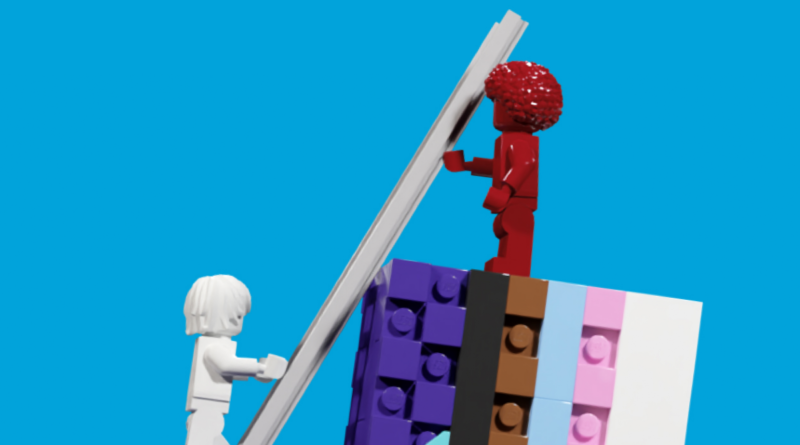 The LEGO Group’s recent LGBT+ friendly activities are very impressive, although there is arguably still room for improvement.

As LEGO has grown in popularity as a brand, the LEGO Group has been making concerted efforts to represent more people in its products. These range from depicting a wider range of skin tones to including minifigures (and mini-dolls) with disabilities. These are an important step for any toy to take, as we all deserve to see ourselves represented here.

The LEGO Group has also been working to make sets that appeal to the LGBT+ community. 2021 saw two major releases hit shelves: 40516 Everyone is Awesome and 10291 Queer Eye – The Fab 5 Loft. These reflected symbols and culture associated with queer people; the former set has even recently had its availability on shelves extended.

That said, we feel that these sets fall short of effective LGBT+ representation. Our column on this subject points out that the LEGO Group has struggled with depicting romantic queer relationships in an official product. Moreover, sets that do include queer people (like 76205 Gargantos Showdown) sometimes seem to downplay their queer aspects instead of celebrating them.

Fortunately, the LEGO Group hasn’t stopped at these two LEGO sets – and has been engaged in queer-friendly actions for some time. This year saw the company launch its A to Z of Awesome campaign during Pride Month. Pride Month is inspired by the 1969 Stonewall Riots, a major event in the history of LGBT+ liberation. Individuals (and companies) take this opportunity to promote the causes of queer people.

The LEGO Group’s campaign honours this idea by asking queer LEGO fans to express themselves. It encourages them to do this by building a letter of the alphabet that conveys some aspect of LGBT+ identity. The company has already reached out to some LEGO fans, who have explored their queerness through the medium of LEGO bricks.

The rest of us are encouraged to post our own creations online, tagging them with the #atozofawesome hashtag. However, the campaign has hit a few bumps along the way.

We’re pleased to report that one of the official campaign builds does include a queer, romantic relationship in LEGO form. Another LEGO builder called James has produced a lovely build with a gay couple in it. However, at the moment it only seems to be mentioned in passing in other media.

While only one such relationship appears here, other queer identities (like being intersex or asexual) are perhaps better conveyed in other ways than their relationships with other people. The use of the intersex flag on a checkerboard, for example, reflects the fact that intersex people exist outside of certain binaries.

Moreover, this approach allows for more unusual takes on the task at hand. The artists the LEGO Group worked with may simply have wanted to depict queer identity in a more creative manner than plonking minifigures in a diorama.

In any case, there’s clearly space for a range of LEGO fans to fill in the gaps. Unfortunately, outside of these initial creations, the #atozofawesome hashtag doesn’t appear massively popular online. It could be that the campaign’s momentum has slowed, or that the LEGO Group hasn’t been able to publicise it effectively.

That said, the hashtag has produced some very nice models. A particular highlight is this one of Marsha P. Johnson – a major gay liberation activist in the mid-20th century.

Basically, there appears to be a glaring lack of A to Z of Awesome models right now. But this is an ongoing project – and a complete alphabet will reportedly be unveiled by the end of the year. This suggests we have many more models to look forward to – and hopefully these will offer a broad look at queer identities and relationships.

In addition to this campaign, the LEGO Group says it’s engaging in a range of other positive actions. These include donations to queer-supportive organisations, participation in Pride events and queer-friendly events for LEGO employees. It is also partnering with major organisations like Stonewall to foster a welcoming working environment; most, if not all of these actions seem likely to benefit LGBT+ people.

This other statement (from the press release linked above) is of particular interest:

“The LEGO Group’s global goal is to increase representation across its portfolio. This covers products, programmes and marketing on all dimensions to reflect the diverse and global marketplace it operates in.”

It indicates that the LEGO Group is looking to explicitly include LGBT+ people in future LEGO sets, even if none have been officially announced yet. While we’re reluctant to turn Pride into a marketing campaign (a common problem at this time of year) this move would be a particularly bold statement for the LEGO Group to make. One that would get a much wider audience than some of the company’s charitable efforts, and send another valuable message of acceptance.

While it appears enthusiastic about its efforts to uplift queer people, the LEGO Group is also strongly committed to Harry Potter. It recently broadcast a segment at Warner Bros. Studio Tour (an attraction dedicated to Harry Potter) during its 2022 LEGO CON event, with more Harry Potter LEGO models presumably on the horizon. Further complicating matters is the fact that J.K. Rowling has helped to fund a legal challenge to Stonewall in the past few months.

We’re certainly not suggesting that the LEGO Group has contributed (by accident or design) to this legal challenge, or that it set out to make any offensive statements. But situations like this arguably undermine its image as a progressive, LGBT+ friendly company.

While it’s important that companies like the LEGO Group respect LGBT+ people, it’s also important to acknowledge some of the limitations in effect here. From its earliest days Pride has been an act of protest – a way for queer people to carve out a space for themselves in a hostile world. We tend to see it as a time for celebration, which is legitimate. But Pride is also about challenging authority, tradition, and how we perceive ourselves.

This means that Pride is a concept that companies can only embrace up to a point. Any queer-friendly move a company makes is going to be influenced by its primary purpose – namely, to sell its own products. Companies must also typically present queer identity in a non-threatening, family-friendly manner – when in real life, queer identity often refuses to fit into such a box.

As such, any company’s message of acceptance is welcome. But even with the best of intentions, it’s never going to be more radical or relevant than one straight from the horse’s mouth.

We sincerely hope that the LEGO Group continues to celebrate and support LGBT+ people in the years to come – and that we see more queer-friendly LEGO products soon. But at the moment, we’re still waiting for the LEGO Group to provide representation in all aspects of its business. While Pride should arguably resist commodification, the muted presence of queer identity in LEGO form still sticks out – given the LEGO Group’s current actions.

Creating more overtly queer LEGO sets would certainly ruffle the feathers of the LEGO Group’s target audience. It would almost certainly lose them some customers. But it would also be a win for representation in a time of increasing anti-queer hostility. And unless the LEGO Group is willing to build on its own momentum, a faint whiff of compromise will invariably hang around its Pride activities – even if its profits, and its popularity, continue to increase.

If it wasn’t already clear, we’re very impressed by the LEGO Group’s stated actions. We’re sure that they’ll help a lot of queer people at a time when they sorely need support. But at the moment, it’s still hard to overlook a fact of corporate Pride activities. As much as a company claims to care about queer people, it inevitably cares about its bottom line that little bit more.