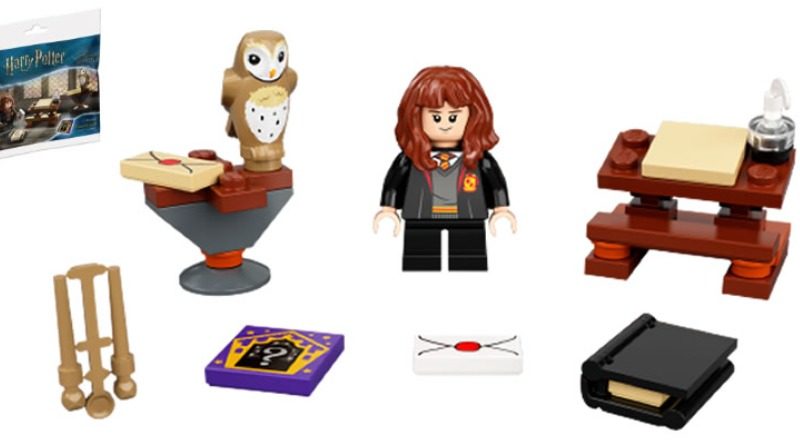 Official images for the polybag LEGO Harry Potter 30392 Hermione’s Study Desk have been spotted on the official LEGO website.

After the polybag was first seen in the ‘replacement bricks’ search function, we can now see exactly what’s included in the set in the first images of the set. As to be expected from the name, this is the first LEGO Harry Potter polybag not to include a minifigure of the eponymous character of Harry Potter.

Instead, we get a minifigure of Hermione, a brick-built desk, a book (because where would Hermione be without a book?), two envelopes, a wand, and an owl. If you’re looking to expand your collection of LEGO Chocolate Frog Cards, you also get one of those included as well.

The inclusion of the owl is an odd one; if you’re an avid Harry Potter fan, you’ll know that Hermione is more likely to borrow Harry’s Hedwig than have an owl of her own, preferring to have a feline friend instead, in the form of ginger-haired Crookshanks.

The minifigure Hermione is not exclusive, with the same torso and legs as Harry wears in 76389 Hogwarts Chamber of Secrets, where the very same owl also appears.

It’s not yet confirmed how 30392 Hermione’s Study Desk will be sold, but last year’s Harry Potter polybag was available as a gift-with-purchase at LEGO Stores, so we might well expect to see a similar situation this year.