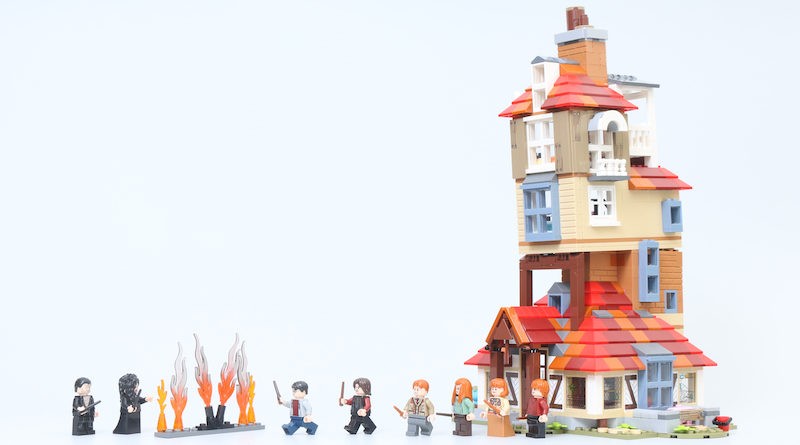 75980 Attack on the Burrow is a demonstration of all that is so brilliant about LEGO Harry Potter at the moment.

With some truly smart exterior construction and interior crafting, 75980 Attack on the Burrow offers a doll house LEGO build expertly balanced between display and access and play, without compromising between the two. Its construction is smart and efficient to pack as much detail and play into every stud of space, whilst just as importantly capturing the busy, chaotic essence of its source material.

75980 Attack on the Burrow is a set that benefits greatly from its source material. Where the interiors and exteriors of Hogwarts Castle sometimes risk falling into repetitive or familiar territory, The Burrow offers fresh ground in every way, from the haphazard nature of the Weasley household’s crooked, towering exterior, to the hustle and bustle of a busy, packed family life inside it, across numerous floors, with nooks and crannies galore. The Burrow is a hectic mess that, thanks to the LEGO Group’s vibrant colour palette and piece selection available in 2020, translates brilliantly into LEGO form.

The build process is engaging and different from page to page, with so many references from the books and films packed into it to make it a particular delight for Harry Potter fans. There’s also curiosity in what you build and how you build it, which comes together at the end to produce a surprising number of rooms, with numerous details dotted throughout, and a large base that opens up on both sides to provide an extra level of access and play.

The slanted floor midway up the building is easily recreated in the model, whilst the transition from exterior front to interior back is seamless, perhaps thanks to the wild mix of colours inside and out. It’s a set that provides an overload on the senses, with so much going on everywhere you look, and it’s one that keeps pulling you back in for more.

A total of eight minifigures come with 75980 Attack on the Burrow, including Harry Potter, Nymphadora Tonks, Bellatrix Lestrange and Fenrir Greyback and four of the Weasleys – Ron, Ginny, Arthur and Molly. Since its return as a theme, minifigure selection has been a particular strength for LEGO Harry Potter, with all eight included here a fine continuation of that, appearing in a set that they are directly linked to by story. Nobody is out of place, even if your mind may wander as to who else could have been included (but can be picked up in other sets, where they are equally as relevant for inclusion).

Only Harry’s minifigure appears in another set, at the time of release, whilst each one’s design is just as careful and considered as they are intricate, lifted directly from the characters’ outfits as they appear in at least one of the notable scenes at The Burrow in Harry Potter and the Half-Blood Prince film.

There has been little to fault in three years of minifigure selection and design across LEGO Harry Potter, and 75980 Attack on the Burrow serves as a great example for why.

Coming in at £89.99, 75980 Attack on the Burrow is surprisingly the joint second most expensive LEGO Harry Potter set released since the theme’s return in 2018, sitting in that position alongside 75969 Hogwarts Astronomy Tower, which is in the same wave of summer 2020 sets, and 2018’s Hogwarts Great Hall. Indeed, with consideration to the most expensive set 71043 Hogwarts Castle’s scale, this trio actually represent the most expensive minifigure scale sets in the theme since its return.

For everything that works so well across design, display and play, and for providing a sizeable roster of top line characters, fittingly then, 75980 represents the sort of continued growth in quality that you would hope for from that higher price. Quality is also importantly matched with value, with that increased price bringing with it a higher number of pieces – in fact, the second largest amount from any Harry Potter set released since 2018, again behind only the behemoth 71043 Hogwarts Castle, and soon, the expected 75978 Diagon Alley.

There’s little to fault with 75980 Attack on the Burrow. It was a standout set for many when images were first released and for reasons that carry over into the experience of building and playing with it. The Burrow is such a recognisable, cherished and visually different setting within the Harry Potter world and the LEGO Group has put every effort into capturing all that is fun and engaging about it across 1,047 pieces. LEGO Harry Potter continues to go from strength to strength, because of sets like this, where clear passion and attention to story is married in the LEGO design process with simple but effective build techniques and part selection. 75980 Attack on the Burrow is one well worth saving up for, and well worth adding to your collection.

75980 Attack on the Burrow is available now at at LEGO.com. You can help support Brick Fanatics’ work by using our affiliate links.