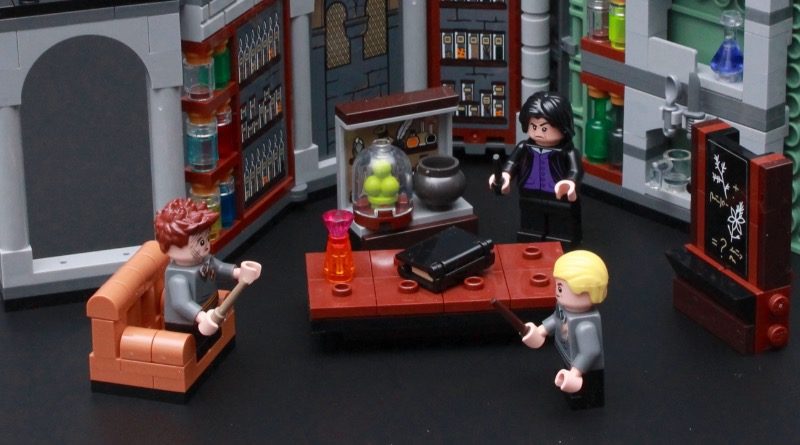 Can 76383 Hogwarts Moment: Potions Class transform one of Harry Potter’s most miserable lessons into a slightly less miserable LEGO set?

This is the second Hogwarts Moment set to go under the Brick Fanatics lens – check out the first here – and, on the face of it, looks to offer a very similar experience, only with a different coat of paint.

There’s more to this set than immediately meets the eye, however – and that’s predominantly thanks to the most interesting selling point of the entire Hogwarts Moments range.

If you’ve already read our review of 76382 Hogwarts Moment: Transfiguration Class, you’ll know that we weren’t especially taken with the LEGO Group’s decision to go with dark orange for Gryffindor. Sand green feels like a less heinous choice for Slytherin, but it’s still not quite on the money – and given it’s the colour that sets the tone for the rest of the build, that’s a shame.

You’ll also need to overcome the repeated use of flame yellow, which is the colour the LEGO Group has chosen to bind all four books together, in place of Slytherin’s more accurate silver. That hue is at least slightly reflected in the interior of this model, which recreates the potions classroom’s walls in light grey – a fitting choice for a dungeon.

It’s also in those walls where 76383 Hogwarts Moment: Potions Class best sets itself apart from its compatriots, both in how they fold out from the spine – one segment is simply permanently attached to the inside back cover, while the other has two hinged sections to create a longer single wall – and how they incorporate more detail than just stickers.

We have the LEGO Group’s extensive existing element library to thank for that, because everything needed for a potions classroom at this scale – from beakers to cauldrons – is already present and correct, and therefore also present and correct in this set. It makes for a more interesting build than the one offered up by 76382 Hogwarts Moment: Transfiguration Class, even if it does once again rely on stickers.

Yep, you can’t escape the dreaded pull of decals, nor their necessary (and incredibly difficult) application on the interior of panels. Mercifully, there’s only one instance of that here, but you’re still going to need steady hands to truly make 76383 Hogwarts Moment: Potions Class look as good as it does on the box.

While constructing this set’s interior is more interesting than we’ve seen in other Hogwarts Moment sets, it’s really in how that interior neatly compacts away into the book that shows how much thought has been put into this range. That’s true across the entire four-set spread, and while it’s once again a manual process, it’s one you won’t really mind doing simply because of how intelligently it’s been achieved.

That said, the mini-builds themselves feel less conducive to narrative play than you might find across the rest of this range: the blackboard and (stickered) shelves are fine, but the table is way too indiscriminate, and the armchair feels like a strange addition. For a set that – like all Hogwarts Moments – is driven entirely by storytelling at the expense of any functions, it’s a touch disappointing.

The other three sets in this subtheme will be high on your wanted list for their professors alone, but not so with 76383 Hogwarts Moment: Potions Class. Professor Snape is technically new, but unless you’re staring at this version and its predecessor side by side, you probably won’t notice – so minute are the differences in the torso printing.

Thankfully, the students are a little more appealing – but only a little. Draco Malfoy has a new torso adorned with the Slytherin house crest, while Seamus Finnigan’s face gets a fun new post-exploding-potion print. None of the characters will be a huge draw here, though, so minifigure collectors can probably safely steer clear.

76383 Hogwarts Moment: Potions Class comes in level with every other Hogwarts Moment set at £27.99 / $29.99 / €29.99, so we can only really echo the same concerns we have with all four of them: the finished product feels too small for the cost, and a fourth minifigure would have helped enormously with the value proposition.

It’s worse in some respects here because the minifigures carry less appeal for veteran collectors, but the parts are at least a little more interesting. Simply put, you’re best waiting for a discount – especially if you’re only looking to satisfy the completionist itch the Hogwarts Moments range seems tailor-made for scratching.

If you’re contemplating diving into the Hogwarts Moments line-up, there are better places to start than 76383 Hogwarts Moment: Potions Class. But that doesn’t mean this is a bad set: it does most things just as well as the rest of the range, and even beats them in some departments (namely the parts selection used to decorate the dungeon’s walls).

It’s just that in the areas that it really matters – those that help to properly distinguish each buildable book from the next – 76383 Hogwarts Moment: Potions Class falls a little bit short. We’re talking mainly about the minifigures, but also about the tiny builds that comprise the book’s interior.

It adds up to what’s probably the easiest set in this wave to skip – but if you’re buying one, you’re probably going to buy them all anyway.

Support the work that Brick Fanatics does by purchasing your LEGO Harry Potter sets through one of our affiliate links.

How long does it take to build 76383 Hogwarts Moment: Potions Class?

76383 Hogwarts Moment: Potions Class takes around 45 minutes to build, in line with every other Hogwarts Moment set, and a good chunk of that will be spent applying stickers.

How many pieces are in 76383 Hogwarts Moment: Potions Class?

76383 Hogwarts Moment: Potions Class consists of 271 pieces, the most of any Hogwarts Moment set, and includes three minifigures – all of which are exclusive variants of characters we’ve seen before in LEGO.

76383 Hogwarts Moment: Potions Class measures approximately 12cm high, 8cm wide and 4cm deep when the book is packed away and closed up.

How much does 76383 Hogwarts Moment: Potions Class cost?