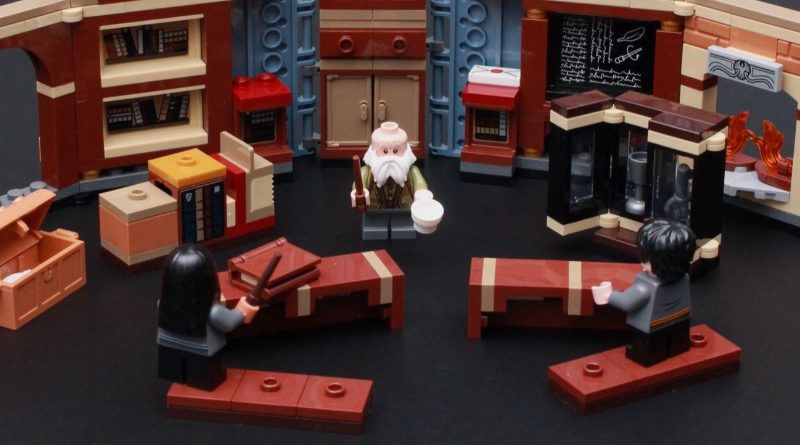 Can 76385 Hogwarts Moment: Charms Class swish and flick its way to the top of the LEGO Harry Potter theme’s pile of buildable books?

This is the fourth and final of our Hogwarts Moment reviews (at least until the LEGO Group churns out a few more), and while we’d like to say we’ve saved the best for last, that accolade still lies with 76384 Hogwarts Moment: Herbology Class (review).

That doesn’t mean you should skip out on 76385 Hogwarts Moment: Charms Class altogether, though – how else will you know it’s Wingardium LeviOsa, not LevioSA?

When fully opened up and on display, 76385 Hogwarts Moment: Charms Class matches 76382 Hogwarts Moment: Transfiguration Class as the most sprawling and expansive of the four sets. That’s largely thanks to the symmetrical folding walls both books share, but also through the sheer number of mini-builds packed inside.

Together, they create the closest approximation of a traditional classroom as you’ll see across the range: there are desks, benches, a display cabinet, shelves and a blackboard. Frustratingly, the latter two in that list rely entirely on stickers placed on the inside of panels, which is the least fun you can possibly have with LEGO (short of standing on a rogue piece barefoot, natch).

That means this isn’t quite as thematic as the dungeons of 76383 Hogwarts Moment: Potions Class or the greenhouse of 76384 Hogwarts Moment: Herbology Class, but it does carry a few Charms-specific touches: the display cabinet’s key and goblet are readymade for levitation, while the stack of books for the new Professor Flitwick minifigure to stand on is a fun reference to the films.

The same problems that plague short-legged characters generally persist here, though: Harry and Cho Chang can only stand on their benches, which looks pretty naff on display, and isn’t really conducive to realistic play (as much as a LEGO set about a fictional classroom that can collapse into a book can lend itself to realistic play, that is).

The muted colours employed by this range feel less painful here than in 76382 Hogwarts Moment: Transfiguration Class – at least this is another shade of blue, instead of a different colour entirely – but we’re sticking to our guns with wishing for brighter hues across all four sets, to better match those of the Hogwarts houses.

Where it shares flaws with other sets in this range, though, 76385 Hogwarts Moment: Charms Class also deserves similar praise for how it takes all those scattered sub-assemblies and packs them oh-so-neatly away into the confines of the book cover, allowing it to easily fold shut with very little drama.

Once again, the staff take centre stage in the Hogwarts Moments range: we’ve seen Professor Flitwick before, but only as he appeared from Harry Potter and the Prisoner of Azkaban onwards. This version draws on his character design from the first couple of films, big, bushy beard and all, and it’s much the better for it.

By contrast, Harry and Cho Chang represent pretty minor upgrades over previous iterations: they’ve both got new house crest prints on their torsos, but that’s basically it. Harry is Harry – you’ve got a million already, we know – and Cho still has that same ill-fitting skin tone she’s had for years. (Quick, someone tell the LEGO Group about the sunk cost fallacy.)

Spread out across your shelf, desk or whatever display area you have to hand, 76385 Hogwarts Moment: Charms Class begins to feel like pretty good value. That’s a sentiment true of the entire range, but given most of us don’t have that kind of sprawling display space to spare, you’re more likely to slide this one on to your shelf as a closed book.

76385 Hogwarts Moment: Charms Class won’t quite charm your socks off, but if you’re already invested in this smart range of buildable books, it’s definitely worth picking up to complete the series.

The colour scheme is more tolerable purely because sand blue is such a cool hue; the foldaway book format is no less impressive than in the other three sets; and this is as close to a traditional classroom setup as you’ll find among all four. The new Flitwick variant is just the cherry on top.

That said, 76384 Hogwarts Moment: Herbology Class remains the one to beat in any future instalments in this subtheme – but 76385 Hogwarts Moment: Charms Class comes pretty close, and that makes it worth your time. Just try to find it at a discount.

How long does it take to build 76385 Hogwarts Moment: Charms Class?

You’re looking at roughly 45 minutes to fully assemble 76385 Hogwarts Moment: Charms Class. Wingardium Leviosa would do it in half the time – if magic was real…

How many pieces are in 76385 Hogwarts Moment: Charms Class?

There are a grand total of 256 pieces in 76385 Hogwarts Moment: Charms Class, which makes this the second-largest of the four Hogwarts Moments by part count.

76385 Hogwarts Moment: Charms Class matches the rest of this range at 12cm high, 8cm wide and 4cm deep, which allows them all to sit flush on a bookshelf.

How much does 76385 Hogwarts Moment: Charms Class cost?