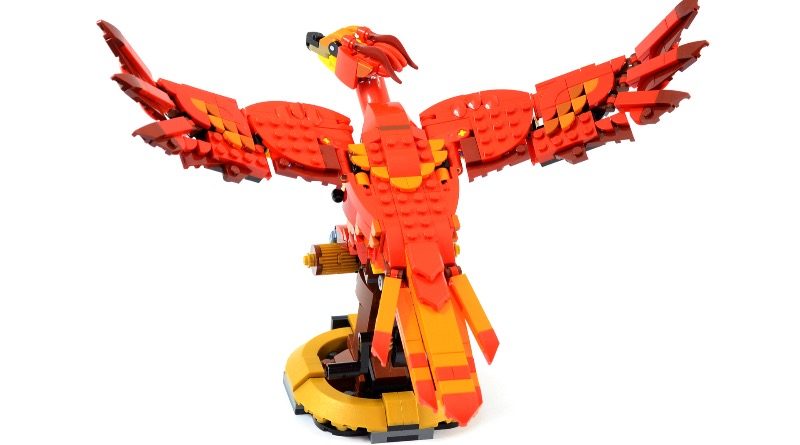 76394 Fawkes, Dumbledore’s Phoenix swoops on to the LEGO Harry Potter scene this summer, taking its cues from one of the most popular Wizarding World sets of 2020 – and with just as much success.

Last year’s surprise buildable, wing-flapping 75979 Hedwig model must have been a big hit, because it has quickly been reborn (or re-skinned) into 76394 Fawkes, Dumbledore’s Phoenix. That, or the LEGO Harry Potter team was looking for a quick addition to the line-up without reinventing the wheel.

Either way, 76394 Fawkes, Dumbledore’s Phoenix looks considerably more striking thanks to its bright colour scheme and sharply-defined head, matching its cinematic counterpart. If you’re looking to spruce up your own display or buy a gift for someone who is a bit more ‘Harry Potter fan’ than ‘LEGO playset fan’, this set could be worth a look. Plus, an exclusive Dumbledore minifigure sweetens the deal. Let’s see how it stacks up in the bricks!

But before we begin, why the name ‘Fawkes, Dumbledore’s Phoenix’? As opposed to all of the other Fawkeses in the franchise? They didn’t call 75979 Hedwig ‘Hedwig, Harry’s Owl’. A minor point, but a mouthful.

It’s not every LEGO set that explodes with colour out of the box, especially in a licensed theme like Harry Potter that’s usually dominated by muted browns, blacks, greys or tans. 76394 Fawkes, Dumbledore’s Phoenix provides a welcome exception, with all but the first bag that builds the stand filled with eye-catching reds, yellows and oranges. Even the bulk of the Technic parts appear in suitably matching colours.

The actual build process remains fun and varied throughout, with parts constantly going in multiple directions and of course the Technic bits interwoven for the wing-flapping function. You can feel a deep knowledge of LEGO geometry on the part of the designer, especially in the stand, which winds up more complex than it may look, and in the areas with System parts seamlessly fitted around Technic.

If you’ve built 75979 Hedwig, you might experience LEGO déjà vu, as the wings are constructed identically – right down to the patterning of the 1×1 quarter round tiles. The flapping mechanism is also exactly the same, though built into the stand slightly differently, and some aspects are built in a different order for whatever reason.

Regardless, Fawkes looks superior to Hedwig by the end. Hedwig has semi-comical googley eyes, and Fawkes certainly stands out more on a shelf thanks to its colour scheme.

Design-wise, there’s simply nothing to fault about 76394 Fawkes, Dumbledore’s Phoenix from stand to head to tail. Colour-blocking looks terrific throughout the model; the dominant red is dotted with orange and dark orange, outlined with dark red, and features a yellow and flame-yellowish-orange underbelly.

Since Legends of Chima, LEGO designers have had ever-increasing experience with intricate creature head builds, and it shows. Fawkes’ head looks superb, making use of quite a variety of parts and colours to create his head very recognisably. The still fairly new large ‘macaroni’ piece is employed well for the neck, in red for the first time.

One problem that often plagues models with Technic can be the colour-locked small parts, with blue and tan pins sticking out like a sore thumb. Not so here, as the only blue half-pin half-axles are barely visible underneath the wings, and the most visible axles on the top of the model appear in yellow, so fit in as well as they could (though red might have been preferable).

As for the kinetic function, it makes a satisfying flapping motion, and it’s fun to turn the crank and see how the wings move. Of course, most of the time you’d have this set sat on a shelf, but you can see it as the sort of thing where you might have a friend or guests over, take it down, and show them how cool LEGO can be with the flapping movement. What’s more, the gearing is strong enough to hold the wings in an upward position, so you have that display option too.

Prior to 2018, when the LEGO Group injected the dormant Harry Potter theme with exciting new life, we’d get one LEGO-y, not-particularly-accurate Dumbledore design per film or wave. His face print remained the same from 2001 to 2007, and his beard was actually first designed in 1993 for the LEGO Group’s in-house wizard, Majisto.

That’s not to say that any of the LEGO Dumbledores were bad designs, but given his fashionista tendencies in the earlier films especially, the dearth of Dumbledore designs was profoundly felt. Well, the veritable explosion in Dumbledore designs has put that problem to rest, with the 2021 wave bringing the total count to six different outfits in the last four years.

The robes he wears exclusively in 76394 Fawkes, Dumbledore’s Phoenix match those seen in several scenes in his office with Fawkes in Harry Potter and the Chamber of Secrets, making them a fitting choice. Dumbledore is missing his hat though, which he typically wears in the second Potter movie.

The choice to use standard minifigure legs instead of a dress piece also seems odd, given that every other Dumbledore minifigure since 2018 has used it (besides the one found in 75954 Hogwarts Great Hall, which was intended to interact with chairs).

Nonetheless, this Dumbledore looks splendid, though not truly essential to anyone besides collectors or completionists, as the two Collectible Minifigures versions remain the more memorable and definitive iterations. He’s icing on the Fawkes cake, but not reason alone to buy this set.

With 597 pieces for £34.99 / $39.99 / €39.99, 76394 Fawkes, Dumbledore’s Phoenix represents great value looking at the part count alone. While it actually contains 30 fewer elements than 75979 Hedwig, it retains the same size and includes an arguably more exciting exclusive minifigure, so being priced the same makes good sense.

Within this summer 2021 wave, Fawkes competes at the price point with 76387 Hogwarts: Fluffy Encounter, but the two are tough to compare. This one is essentially a kinetic display model, while that one is a playset that can add to an overall Hogwarts play or display experience. That said, we documented a number of flaws with 76387 Hogwarts: Fluffy Encounter, while 76394 Fawkes, Dumbledore’s Phoenix is pretty much devoid of flaws.

All in all, the price feels spot on, provided you want a brick-built Fawkes display piece in the first place.

Pleasingly, 76394 Fawkes, Dumbledore’s Phoenix looks and functions every bit as well as one may think by looking at the official pictures. It’s instantly recognisable as Fawkes and eye-catching on display, being considerably louder than pretty much any other set in this theme.

The Dumbledore minifigure in an exclusive outfit and still uncommon Fawkes piece are not at all the main draw, but simply add even more value to an already terrific set.

How long does it take to build LEGO Harry Potter 76394 Fawkes, Dumbledore’s Phoenix?

It takes up to an hour to build 76394 Fawkes, Dumbledore’s Phoenix, but if you’re not used to Technic then perhaps a little longer, as there is a fair bit included.

How many pieces are in LEGO Harry Potter 76394 Fawkes, Dumbledore’s Phoenix?

There are 597 pieces in 76394 Fawkes, Dumbledore’s Phoenix, including a Dumbledore minifigure in an exclusive outfit, and the minifigure-scale Fawkes that has thus far only appeared elsewhere in the second Wizarding World Collectible Minifigures series.

Not counting Dumbledore on his stand, the primary Fawkes model in 76394 Fawkes, Dumbledore’s Phoenix measures 18cm tall, 24cm from head to tail, and an impressive 35cm from wing-tip to wing-tip.

How much does LEGO Harry Potter 76394 Fawkes, Dumbledore’s Phoenix?