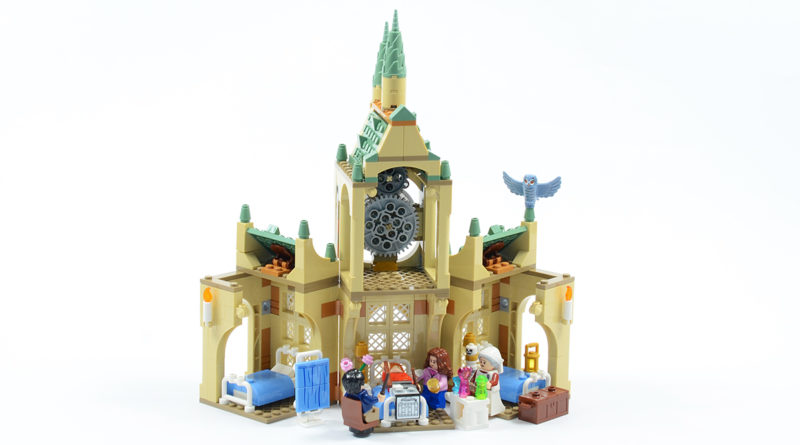 LEGO Harry Potter 76398 Hogwarts Hospital Wing feels like a set of two halves – and would maybe have been better served by a budget cut from the Ministry of Magic.

Between 75947 Hagrid’s Hut: Buckbeak’s Rescue and 75945 Expecto Patronum in 2019, and 76398 Hogwarts Hospital Wing, 76407 The Shrieking Shack & Whomping Willow and 76401 Hogwarts Courtyard: Sirius’s Rescue in 2022, the LEGO Group has covered the third act of Harry Potter and the Prisoner of Azkaban in greater detail than almost any other moment from the series.

76398 Hogwarts Hospital Wing is more than just a stop on that narrative journey, however. It packs in some good detail, parts and minifigures in its own right, though it also exemplifies some of the flaws of the current modular Hogwarts system and gets muddled trying to do two different things at once.

Taking one look at the box art for 76398 Hogwarts Hospital Wing tells us that something is afoot: is it trying to be the hospital wing, or the clock tower, or both? The set’s name would suggest that the hospital wing takes centre stage, though the clock face dominates the exterior look of the set.

The LEGO Group also (accurately) included a bit of hospital wing last time it did the clock tower in 2019, though there was no doubt that the tower was the focus of that set. Ironically, the box designers have placed 2019’s film-accuracy focused 75948 Hogwarts Clock Tower in the background behind this set, underscoring how this model does not look much like a clock tower despite the clock itself drawing our eye.

Nonetheless, putting aside the clock tower conundrum for a moment, everything about the hospital wing portion of the set is excellent inside and out. The arched details and decision to eschew the previous Hogwarts colour scheme of black lattice in brown frames in favour of white in tan makes for a splendid exterior look, more pleasing than most of the new modular Hogwarts sets released thus far.

That colour palette also creates a light and airy feeling on the inside, which captures all of the essential elements of Hogwarts’ hospital wing and leaves room for posing minifigures and accessories.

One of the modular system’s strengths has been capturing particular rooms with more ample detail and space than the exterior-focused 2018-2020 sets could usually afford, and that remains the case here. While the beds and side tables are repetitive to build, and don’t pack in as much detail as 76386 Hogwarts Polyjuice Potion Mistake, for instance, they come together to create a fully-fledged hospital wing.

The build does have a couple of quirky features worth mentioning, however. For one, it instructs you to put together all of the side-builds separately, with no direction to put them in the set. These amount to a curtain partition, seat, trolley of remedies, lantern, trunk, Bertie Botts container, and the wonderful bottle of Skele-Gro.

While all of these things can be crammed onto the interior studs, the set has been designed with the feature of hinging apart so that some accessories can be put into the blank spaces in between instead. It’s atypical, but works for play.

Unfortunately, the whole exterior look of the set is dominated and let down by the addition of the clock segment. From the outside this portion adds so much visual weight that all of the pleasantries in the design of the hospital wing portion fade away. It doesn’t help that the set has been designed so that the clock juts out over the rest, though without an actual tower beneath it, the clock is still comically low to the ground. Things don’t look much better from the side, where the clock segment’s open arches lead to nowhere, and the grey Technic connecting bricks stick out like a sore thumb.

There isn’t much in the way of detail inside the clock segment, though the LEGO Group suggests posing Harry and Hermione here for the scene where they turn back time to go save Sirius Black. In the film this takes place in the hospital wing itself, which is on the same level as the cogs of the clock, though relative location that precise doesn’t matter too much in a LEGO set.

Removing the clock portion from the rest, it has merits on its own. The 2×2 round tile for the smaller clock isn’t quite as nice as the shield used previously, though does the job, and the taller spire working as the actuator for the clock hands makes for a fun mechanism.

Ultimately, these two disparate segments – hospital wing and clock – remain feeling disparate even when put together. The clock does not look like it belongs above this hospital wing build, and the look of the hospital wing becomes muddled by the clock. Still, any set should be able to stand on its own even if it can be enhanced in combination with other sets, and without the clock the hospital is missing a middle portion of roof, while the clock segment by itself is missing anything to turn it into a real, sensible tower.

At the time of this set’s release, all four minifigures were exclusive. In light of the June sets that we now know are coming, two remain exclusive: Madam Pomfrey and Ron with just his red shirt, without his dark red sweater.

As usual with the Harry Potter line, the minifigures exhibit tremendous attention to detail. Nobody would have really minded if Ron was still wearing his sweater in this set, but the designers have gone one step further anyway. Ron also accurately has his right leg in a cast, while Hermione has a bandaged hand, just like in the movie.

Madam Pomfrey includes detail to a Collectible Minifigures series level, with a tremendous and unique hat-hair piece, exclusive head with kindly and slightly troubled expressions, and a masterful repurposing of a dress piece originally designed for Princess Leia.

The characters are supported by heaps of accessories, including the newer spread-wing owl recoloured in sand blue, a Time Turner for Hermione – now printed on a 1×1 round tile – that Skele-Gro bottle using the baby head, and more.

On face value the price of this set looks like a fantastic proposition. The part count exceeds the golden 10 pence per piece metric with 510 pieces for £44.99, the set includes a plethora of desirable accessories (especially the owl, trunk with new top in brown and Skele–Gro bottle), and Madam Pomfrey is here for the first time in very-well-designed LEGO glory.

Still, given that the set is better off without the middle clock component, it feels like it isn’t quite worth its cost as a completed model, only because it should have been smaller than the one the LEGO Group is selling. The floor space taken up by the hospital portion feels like it should be a roughly £30 set, even if the part count and everything included says £45 is good value.

It’s a weird feeling to wish a LEGO set included less, but that’s how we feel about 76398 Hogwarts Hospital Wing. For the eponymous hospital wing part of the set – the building, the detail, the accessories, and the minifigures – we’d recommend it hands down.

Things go wrong with the clock portion, which looks rammed on to a set where it doesn’t belong, detracting from the overall aesthetic and adding no real value other than a clock face to potentially add separately on to your modular Hogwarts (which we’ll be trying in another article – keep an eye out for that).

Since the price is good for the amount of parts and everything included, you could always dismantle the clock or rebuild it into a more suitable roof for the hospital, but we have to judge the set how the LEGO Group has presented it, or we’d be saying every set offers good potential for making something else – that’s just the nature of LEGO!

Still, if you want a good Hogwarts hospital wing and Madam Pomfrey, you won’t be disappointed. If all you truly want is Pomfrey then there’s always BrickLink, but as she’s commanding a fifth of the full retail price there, you might want to weigh up your options.

How long does it take to build LEGO Harry Potter 76398 Hogwarts Hospital Wing?

It takes around 45 minutes to build 76398 Hogwarts Hospital Wing, and thankfully very little of that time is spent stickering since the set has just three stickers!

How many pieces are in LEGO Harry Potter 76398 Hogwarts Hospital Wing?

There are 510 pieces in 76398 Hogwarts Hospital Wing, with a range of large and small parts and lots of good accessories, including the new sand blue owl, new trunk top in brown, printed Time Turner and Skele-Gro with exclusive printed cylinder and skeleton face on the LEGO baby head.

The complete building (if you keep the clock on) measures 26cm high, 20cm wide and 10cm deep, making it one of the larger modular Hogwarts add-ons released thus far.

How much does LEGO Harry Potter 76398 Hogwarts Hospital Wing cost?

76398 Hogwarts Hospital Wing is priced at £44.99 in the UK, $49.99 in the US and €49.99 in Europe. You get a fair amount of great LEGO Harry Potter content for the price, though the resulting building might feel somewhat small or incomplete at any rate.