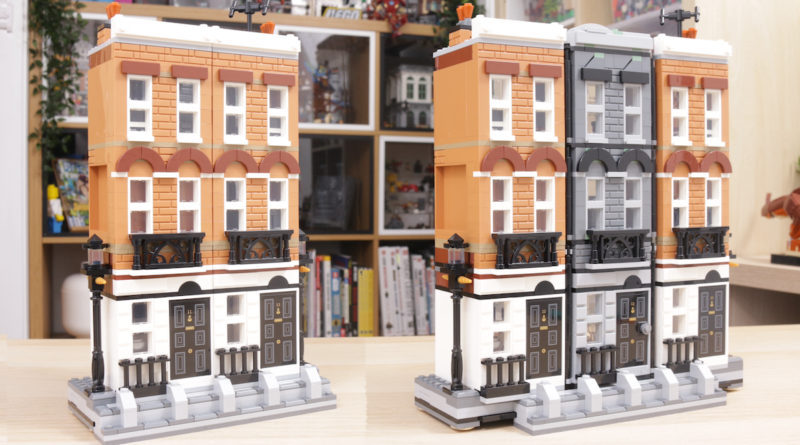 76408 12 Grimmauld Place well and truly captures the magic and wonder from Harry Potter, raising the bar for the LEGO Harry Potter theme with a transformative set.

Finally, LEGO Harry Potter is venturing to places that the theme has never been to before and, with that, comes sets like 76408 12 Grimmauld Place – new, interesting and wholly unique. It’s remarkable that we are more than two decades into LEGO Harry Potter as a theme (give or take a seven-year hiatus) and large chunks of the later books and films remain almost entirely unexplored in LEGO sets. Compare that to LEGO Star Wars which is 23 years running (without a seven-year hiatus) and the depth and breadth to which they have mined dozens of tie-in films, television shows and even expanded universes.

For whatever reasons we have been made to wait – which seemingly hinged on tone vs. LEGO audience – finally with the summer 2022 wave of LEGO Harry Potter sets we are diving into some of the later material from the magical wizarding world. 76408 12 Grimmauld Place is one such set, taking inspiration from the opening act of Harry Potter and the Order of the Phoenix. For a first visit to such an iconic location from the books and films, the LEGO Harry Potter team has fittingly gone all out.

12 Grimmauld Place is godfather-to-Harry-Potter Sirius Black’s hidden-in-plain-sight (or rather, between two buildings) home in Islington, London, used as a headquarters for the Order of the Phoenix, a secret society formed to oppose Lord Voldemort and the Death Eaters. It is best remembered for how it first appeared, popping up out of nowhere as terraced properties 11 and 13 Grimmauld Place shifted sideways, much to the obliviousness of the muggle neighbours inside.

When rumours first circulated that a set based on this – 76408 12 Grimmauld Place – was on the way, there was no real consideration as to if this particular feature to the location would be incorporated somehow or not. It was more widely assumed that such a detail would be not possible and so overlooked in favour of a large minifigure count to beef up the Order of the Phoenix members and a dollhouse-style build to explore 12 Grimmauld Place’s interior.

76408 12 Grimmauld Place not only offers that sizeable minifigure count and a more-than-decent dollhouse model that neatly balances exterior design with interior play, but it also, crucially and somewhat amazingly, appears and disappears between its neighbouring properties, just like in the book and film, just like magic.

It’s a relatively simple feature just very well designed in both concept and practice with that simplicity helping to ensure that it is also structurally sound – pull on the lampposts either side to pull out 12 Grimmauld Place, or push together the two outside terraces to push it back in, effortlessly and smoothly.

For a first visit to this location in LEGO form, this is something that sees 76408 12 Grimmauld Place well and truly deliver on the wow factor. It may be easy to dismiss the core functionality of the set – that the house effortlessly moves in and out from between its neighbouring properties – as a gimmick, but that can only be so until you build it and then get to play with it, at which point that’s all you’ll be doing, for just how effective and fun it is. What was barely imaginable for a LEGO set based on 12 Grimmauld Place is in fact so well-conceived.

And we cannot overstate just how perfectly this single feature to the set elevates it above any number of other LEGO sets, in the Harry Potter theme and indeed across the wider product range, and from what’s currently available and from what has come before. There’s nothing to fairly compare the fluid, fantastic motion that this set offers, for how effectively it works, for how accurately it actually looks and, for how strongly it plays all the right notes to Harry Potter fans. As a theme, LEGO Harry Potter has been delivering some stand-out LEGO sets in recent years and it is pretty clear that 76408 12 Grimmauld Place is the latest such creation.

Its functionality is also as intelligent and considered by design as it has been ambitious, because it ensures that there is still a credible and playable interior, with most of the mechanisms that create the movement and transformation seemingly crafted out of sight.

76408 12 Grimmauld Place works twice as hard as any other LEGO Harry Potter set for that reason too. The play function is central to its initial appeal, but the ability to still offer up a decent exterior design and interior space for play ensures that for both of those standard LEGO Harry Potter theme identifiers it stands shoulder to shoulder with any of the other sets currently available, with little compromise, considering that the outer terraced house interiors are on triangular-shaped plates to allow the model’s internal folding mechanism. Altogether, delivering on play and display ensures that beyond what is a noteworthy play feature, 76408 12 Grimmauld Place is a set with the same longevity for both aspects as any other LEGO Harry Potter set.

The exterior is minimalistic in design but by no means basic, capturing a decent amount of detail from the version of 12 Grimmauld Place we saw on screen, whilst the darker colouring for the central house reflects the level of care that has gone into recreating the details that matter most to the outside appearance.

That approach is continued through to the set’s interior, most notably in the Black family tree tapestry which has been very smartly recreated in true LEGO style across two large stickers. The downstairs kitchen, bedrooms on the third floor and numerous objects dotted around – such as those creepy paintings – give the inside of the house the character and personality that it haunts on screen and in the books. The angled baseplates that are needed so as to fold away the interior when the house moves back inwards don’t detract too much, in fact arguably adding to the pokey, claustrophobic and shadowy feel that 12 Grimmauld Place evoked. If there is one detail that is perhaps missing then it would be something to better reflect the abandoned state of the place – items under dustsheets and cobwebs in the corners hint at how the house was left unattended for 10 years prior to Sirius’s return.

Such a set that is otherwise packed with such play is, of course, strengthened even further by being so heavily populated with minifigures…

It’s a notable list of characters, some benefitting from new or exclusive designs too, and all true to how they appeared on screen in Harry Potter and the Order of the Phoenix. Since the theme’s return, character design for LEGO Harry Potter minifigures has been remarkably accurate and true – have there been many – or any – designs of Harry Potter characters in the last four years to criticise? That being said, for the sheer number of characters who appeared at this location, no two Harry Potter fans will likely agree on the best selection to include in such a set. The LEGO Group will also point to how some of those not in 76408 12 Grimmauld Place do appear in other LEGO Harry Potter sets currently available.

Even so, and even for how well-designed these characters that are included are, Remus Lupin and Arthur Weasley could have suited this set just as much, whilst it is curious to note just how many Weasleys are included – indeed, as many as are in 75980 Attack on the Burrow. There are many Weasleys, but how many do we all have in our collections now?

Coming in at £114.99 / $119.99 / €129.99, 76408 12 Grimmauld Place is by far the most expensive LEGO Harry Potter set releasing in the 2022 summer wave and wherever you are that’s an eye-watering amount for one LEGO set. However, for everything that 76408 12 Grimmauld Place offers, particularly based around the two key points – this being the first time we have visited this in LEGO form and it actually functions as it did in the book and film – there is plenty of value and play to be had both short and long term here. The functionality of the set really places this set apart from anything else currently available to Harry Potter fans, so if there’s one set worth saving up that little bit extra for, it’s one like this that can give you that little bit extra back.

76408 12 Grimmauld Place is a long-awaited and much-anticipated LEGO set, yet also one that none of us would have anticipated arriving in the form that it has. Offering the same balance between exterior display and interior play as any number of other LEGO Harry Potter sets, 76408 12 Grimmauld Place takes things to a new level with a smart and unexpected play feature that pays true homage to the books and films that inspired it.

The Wizarding World of Harry Potter is full of wonder in unexpected places, with spells that work in unexpected ways – this is a location that reflects that so cleverly and memorably in the books and films and now it does so once again, for the first time in LEGO bricks, in the form of 76408 12 Grimmauld Place.

76408 12 Grimmauld Place takes a good hour to put together, across a build in seven sets of numbered bags.

76408 12 Grimmauld Place measures 29cm at its tallest point, and when extended out is widest at 25cm. In that same position it is 12cm deep, which pushes back to 17cm deep when the set is folded in.