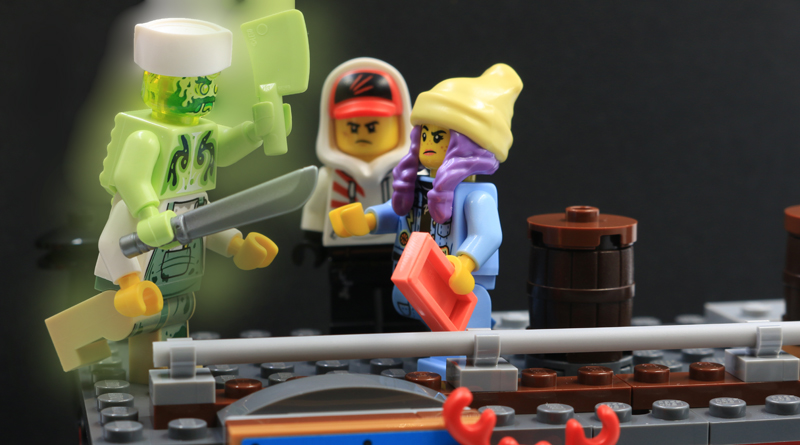 Diners are a popular choice for the LEGO Group’s product range, from small interpretations in the Friends range like 41379 Heartlake City Restaurant to highly detailed models like Creator Expert 10260 Downtown Diner. After all, even minifigures need to eat. Behind its wonderfully wacky name, 70422 Shrimp Shack Attack is a seaside diner where a bite to eat may just bite back. It it enough of a bite to be worth reeling in?

To add to the playability of this model, there is a little vehicle to build for Parker and Jack to use when hunting down ghosts. It does not require much building as it uses a new unique chassis element, and most of the details come from tiny, fiddly stickers. It may be fun to swoosh around, but because its bright blue, it doesn’t really fit into a set with such a muted colour scheme.

Just to the side of the diner is a small seating area that will eventually also be the base for the eponymous shrimp sign. This is where the first spooky features are incorporated. A simple Technic lever system allows a trapdoor complete with LEGO tooth pieces to spring open, with red 2×4 tiles inside imitating a large tongue. Then a dark red 4×10 plate is covered in circular tiles to create a creepy walkway that will slide out of the main model.

In fact, that sliding function is what makes building the base for the diner itself so interesting. Even in quite a small model the designers have put a lot of thought into incorporating all of these spooky details, which can be easily hidden if fans want to use 70422 as a display piece. The kitchen interior is very detailed, from all of the typical equipment like an oven and grill, to a coffee machine and 1×1 cones imitating sauces. Considering this is a fish restaurant though, there is a lack of LEGO seafood to actually cook.

The Hidden Side app is mainly interactive with two of the kitchen counters, which have rotatable different coloured bricks. All the colours cause scenarios where you have to locate the gloom on different spectrums, but after completing the blue spectrum fans then have to defeat four ghosts. Thankfully, you can take on each one separately, and every ghost has a different difficulty level so it is not too repetitive to play. By scanning the shrimp sign fans will discover there’s also Anomalo the ‘boss’ ghost to defeat, which is a bit harder, requiring some tapping strategy and possibly a few bonus upgrades.

Saved right for the end is probably the best part of 70422 – the shrimp sign. It is an amazing build that has an ingenious use of pieces and looks organic, even though it is made from bricks. Clips and brackets produce the overall shape, while skeleton arms recreate tiny legs. The carapace uses 1×1 half-circle tiles, with various curved pieces providing a more natural rounded shape. LEGO whips are then ingeniously used for the instantly recognisable antennae and minifigure flippers make for a cute tail. A really neat feature is that the sign is then mounted onto a ship’s mast, tying in perfectly with the nautical theme.

These fun nautical references across the finished model, combined with its muted colour palette, mean that 70422 Shrimp Shack Attack could actually work really well if displayed alongside 21310 Old Fishing Store. It is one of those rare sets that manages to combine a nice exterior aesthetic with fun play features, and neither detract from the other.

Most of the included minifigure line-up are either unusual variants or totally unique. Parker has a different denim look, printed with numerous geeky badges. Ronny’s stuffed-mouth expression is so funny, and his pizza t-shirt really depicts his love of fast food. Both Enzo and Sally are unique to 70422 and while their normal minifigures are brilliantly detailed, their possessed versions are even better, particularly Sally’s dishevelled hair-piece.

Even for fans who are not as interested in the new Hidden Side range, 70422 Shrimp Shack Attack may still appeal. The fun seaside theme, along with the spooky surprises, make for a fantastic model, just as long as you hide away that sci-fi dune-buggy.

70422 Shrimp Shack Attack is available now at LEGO.com. You can help support Brick Fanatics’ work by using our affiliate links.