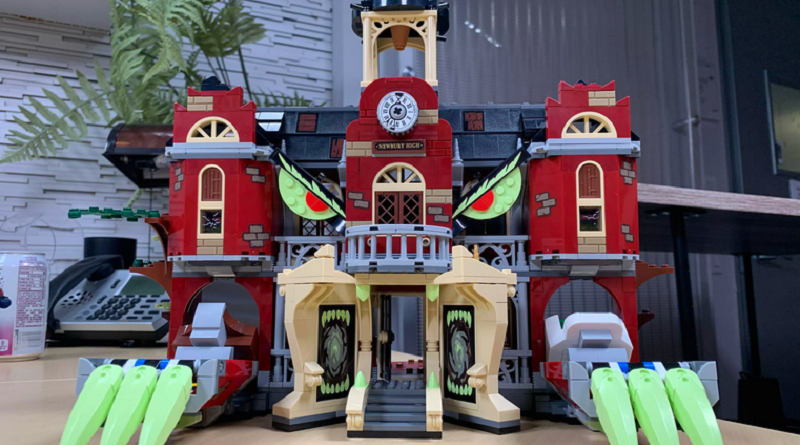 The new LEGO theme, Hidden Side, allows builders to unlock an Augmented Reality world through the use of a smart device. CNET was sent 70425 High School from the range in order to try it out with the app, that will be available for free when the sets launch in August.

According to the website, this LEGO play theme has been specially designed to work with the app. So the models have been developed in such a way that the gameplay has been considered all the way through.

When playing the AR game on a phone, the aim is to suck up ghosts that pop out of the sets and collect them.
Here is the reaction from CNET’s Scott Stein:

I was immediately reminded of Nintendo’s ghost-hunting Luigi’s Mansion game, but in this case there are actual physical LEGO bricks. That, and of course, Ghostbusters, plus a bit of Pokemon Go. LEGO’s previous AR apps for specific LEGO kits were built off Apple’s ARKit. LEGO Hidden Side’s inspiration started further back, with the success of app-enabled kits like LEGO NEXO KNIGHTS.

Hidden puzzles start new events – so moving a certain piece of the set might make the app react differently. Even colours can be identified by the app to reveal certain types of spirits.

The animation in the app is singled out for praise, but there is suspicion that the need to keep the sets constructed may limit creativity:

The LEGO Hidden Side sets are meant to stay constructed so you can play the game, so if your kids are like mine and start mashing up sets and breaking down stuff as soon as they’ve made it, this probably isn’t for you. Also, the whole experience is designed, again, to be used while holding a phone in one hand (the AR app isn’t optimized for tablets), which may not be perfect for a lot of kids who don’t have phones (or if you, like me, don’t want your kids to be screen-immersed all the time and borrowing your phone).

The potential of the AR is highlighted though, with how the technology could be used to identify specific bricks in different patterns.

From reaction, it seems that LEGO Hidden Side is likely to be a fun game, but not quite the step up from other AR offerings that would really set it apart from the crowd.