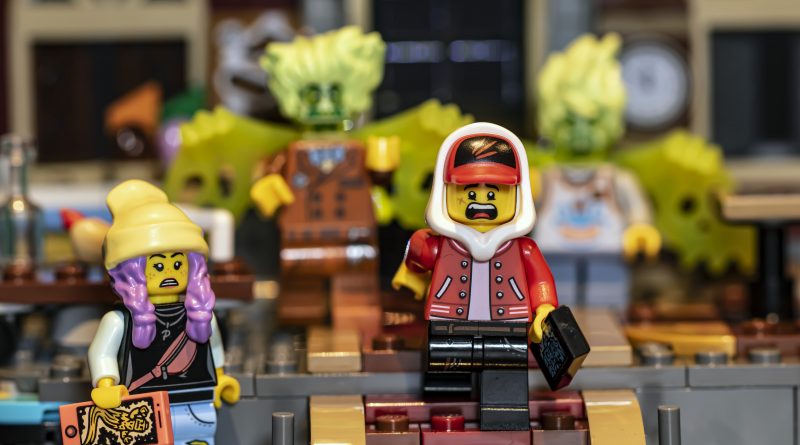 Will the largest LEGO Hidden Side set, 70425 Newbury Haunted High School, prove to be top of the class?

LEGO Hidden Side 70425 Newbury Haunted High School takes the overused horror trope of the haunted house to another level. Not only are the occupants inside the building possessed but the entire exterior turns into a terrifying monster, causing havoc to the pupils and teachers alike.

The largest of the LEGO Hidden Side sets to be released so far, Newbury Haunted High School boasts an impressive 1,474 parts, seven minifigures (and a bonus skeleton), Hidden Side mainstay Spencer the dog and a whole host of spooky extras. But beware, If you’re not a fan of stickers then it’s not just the ghosts you should be scared of, as this set contains a whopping 44 that are used to decorate the High School.

If you’re not familiar with the Hidden Side theme, it is based around the spooky goings on in the fictional town of Newbury. It’s up to two ghost hunting school kids, Jack and Parker, to track down the ghosts, capture them and restore peace back to their local town. Newbury High School is not only their local educational institute but the scene of many spooky hauntings that they must investigate.

The build comprises of two main sections, the first concentrates on the exterior while the second focuses on the interior details. The foundations for the school sit on plates measuring only 36 studs wide, slightly smaller than expected but there is so much going on that the final model ends up feeling a lot larger.

The school begins to take shape very early on in the build. A suitably gothic and spooky looking design is helped by the use of 1x4x1 spoked arches, 1×2 masonry bricks and a collection of parts in new colours such as 6x3x5 ornamented arch, 1x4x2 iron fence and a 4x4x2 quarter round fence in medium stone grey. Dark green plant leaves and brown tree roots continue the spooky aesthetics as well as being in keeping with the haunted mansion feel.

The school’s terrifying alternative form is hidden well by a series of clever play features spread all over the model – even the seemingly innocent looking bus stop turns into a spectre. Two giant claws at the front are spring loaded and tucked away behind the lower front walls. These are revealed when the interior bookshelf, wonderfully represented by a collection of coloured 1×2 plates, and the school’s lavatory are pushed from the other side of the building.

The lavatory follows a current trend for LEGO designers to include highly detailed, well constructed toilets into their models. This is a pretty decent representation, even managing to include a brush. Younger fans will no doubt love the humour involved with this element of the building experience.

Another excellent play feature is hidden within the rear stairs. Pulling these back opens up the front porch, revealing a giant gaping mouth. The front porch itself is excellent, taking advantage of some great parts usage such as the rare tan inverted slopes, 1×1 bricks modified with scrolls and arches.

The giant eyes at the front of the building are tucked behind the school clock. A simple Technic cam shaft is attached to the school clock and upon twisting it, the eyes pop out. The final ghoulish play feature involves pushing back both towers of the school to reveal gruesome trans-lime green tentacles.

Brick Fanatics interviews the designers behind LEGO Hidden Side

The exterior of 70425 Newbury Haunted High School comes together nicely, but constructing the interior is where the experience starts to shine. The ornate spinning blackboard reveals spooky pictures and a haunted teddy bear. The bell tower and the grandfather clock in particular are fun little sub assemblies and look excellent once constructed.

The interior is also packed full of accessories, adding both to the final design and making great additions to any collection. The canteen area has everything from bananas and croissants to hot dogs and pizzas, while the trophy cabinet contains several pearl gold pieces including a chalice, trophy and frying pan.

The section that doesn’t quite work when compared to the rest is the computer monitor area. The use of the air scoop engine is just a little confusing, it’s not entirely clear what it is supposed to be, the computer itself feels too high and the trash can looks out of place.

While on the subject of negatives, the amount of stickers used throughout really does start to feel like a chore. There are just far, far too many. Builders are required to be placing stickers onto pieces at almost every stage – even as far into the build as bag seven there is still around half of the stickers left to go. It takes a lot of the fun out of what would otherwise be a brilliant experience. Some of the stickers are necessary, otherwise the cost of the set would sky rocket, but when you consider that 3x3x6 corner walls were printed, with similar brick markings, as far back as LEGO Pirates 6276 Eldorado Fortress in 1989, it does beg the question as to why some of these pieces weren’t printed here.

Stickers aside, the final model does at least look excellent, both from the front and the back.

The seven minifigures are all of the high standard that has come to be expected from LEGO Hidden Side. Spread across the first wave are two variants of Jack and Parker, the two central characters to the theme. Here Jack is in his red jacket and black trousers, complete with that amazing dual moulded hoodie piece, while Parker wears blue ripped jeans, a top with printed bag and a dual molded beanie and pigtails piece. The school’s caretaker Douglas Elton (whose alter ego El Feugo appears in other sets) looks amazing, with very detailed printing on the torso and legs. This variant also appears in 70418 J.B’s Ghost Lab.

Of the four exclusive minifigures, the two teachers, Principal Rose Davids and Mr Clarke and one of the pupils, Wade, have been possessed. In their normal human form they all have really great printing. Wade’s ‘Squids’ T-shirt and Mr Clarke’s facial prints, along with those striking orange eyes, are highlights. As ghosts they are all suitably frightening with giant yellow green wings for the boys and spooky messed up hair for Rose. Pupil Paolo manages to remain unscathed from ghostly goings on and her unique facial print, including metallic braces and high school jacket, are superb.

70425 Newbury Haunted High School is a fairly impressive and ambitious set. Transforming a large, well built school building into a giant monster couldn’t have been an easy undertaking, but the LEGO design team have done a fantastic job. The school looks excellent and offers up a whole host of areas for play and transforming it into it’s ghastly ghoulish state is not only fun but incredibly satisfying.

The stickers remain, well… a sticking point with this set, and it’s such a shame that the number couldn’t have been reduced somewhat as it really does take away from what would otherwise be a brilliant experience all round. That shouldn’t be enough to put people off however, as the minifigures included are wonderful and the completed model will offer up hours of entertainment – all before even entering the Hidden Side and enjoying the AR experiences.