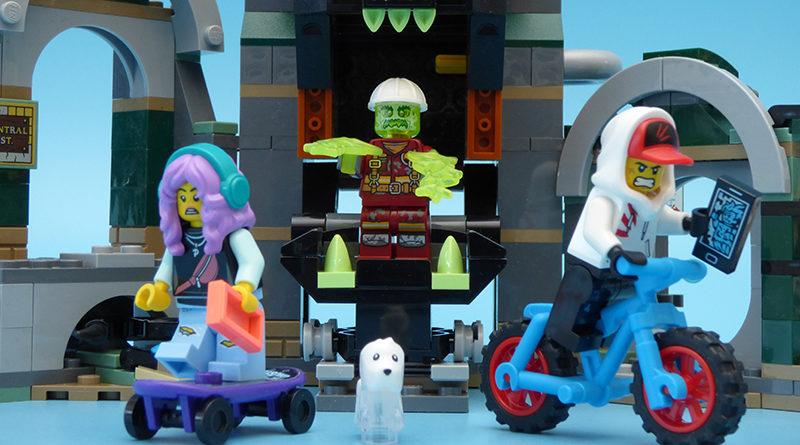 This LEGO Hidden Side set, 70430 Newbury Subway, offers a new location for theme. A seemingly abandoned underground station is a suitable location for the haunted theme, featuring a train carriage and haunted railway worker. Jack, Parker and Spencer are also included in the box. Does the creepy setting translate into a spooky set?

Like 70431 The Lighthouse of Darkness and 70432 Haunted Fairground (review), this follows the style of building a slightly curved model, a stylistic choice that the theme is going for, presumably as it works well with the AR. It results in what feels like a mini movie set, with it easy to imagine Batman or some together character stalking around in the location.

The reason it feels like a LEGO scale movie set is that the model is not one of the fuller buildings found in City or Friends, but just enough of a section of it to give the flavour and look complete from the correct angle. The various tunnel entrances imply depth while the train carriage, from front on, is presumably complete rather than just a small section.

Opting for a grey and dark green colour scheme, with the train carriage in brown, the set designers have conveyed that this is an old subway station from decades gone by. It does not look sleek or modern, it looks old and dilapidated.

A core function sits at the centre of this model. The train carriage section is built separately then attached to its frame. When attached, a sliding mechanism leads to the turning of a lever revealing a monster face that is hidden on the underside of the car. From front on, there is almost no evidence of it being there, making it a really cool function. The way the track is built on the base is a really nice touch.

It turns out that the monster face revealed beneath the carriage is a portal to the Hidden Side, which is where this set ties in with 70427 Welcome to the Hidden Side (review). In that set, Jack has arrived in the spooky world that has started to infest Newbury (any similarities to Stranger Things are surely coincidental…). With 70427 featuring a ‘Newbury Park City Subway’ sign and this set featuring the hint of the Hidden Side colour palette around the back, they are certainly intended to complement each other. The way the designers have illustrated this in the model, without any further knowledge of the storyline required, is a real achievement.

Various hinged 2x2x flip up to reveal colours for use with the app, as is common for all sets within the theme. Most are well disguised, although if the newspaper were angled more it would look more appropriate as discarded trash in an abandoned subway station.

As expected from LEGO Hidden Side, the detailed minifigures found in this set are excellent, with the two heroes and Spencer offered at a low price point. While not the most imaginative of the haunted minifigures, the rail worker looks the part too.

70430 Newbury Subway offers good value for money and includes an excellent function. It offers a distinct vibe that probably only has a place in this particular theme, capturing the haunted feel that Hidden Side is going for.

70430 Newbury Subway is available now at LEGO.com. You can help support Brick Fanatics’ work by using our affiliate links.