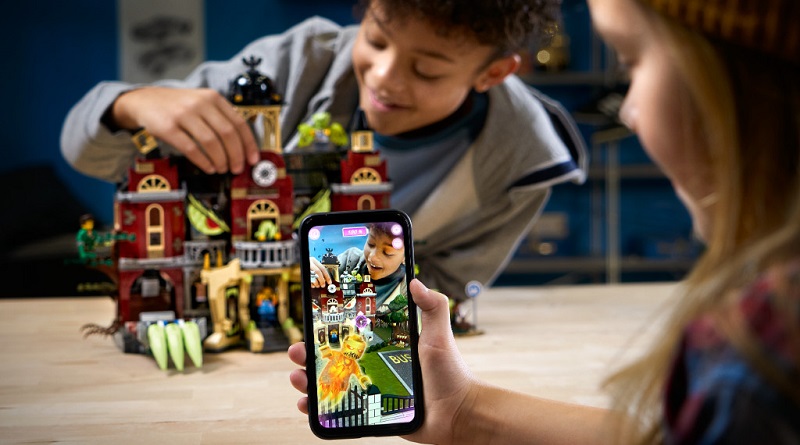 LEGO Hidden Side has launched around the world, offering fans the opportunity to try a new building experience. Follow the instructions, build the set – those aspects remain the same. Once constructed though, the set is the jumping off point for an AR (augmented reality) adventure. Holding a device with the app open over the set will reveal its ‘Hidden Side’.

To explain how the sets are designed to be enjoyed both with and without the digital layer, LEGO Senior Product Lead Murray Andrews and Senior Model Designer Luis Gómez sat down with Brick Fanatics.

As well as being tied to the app, the Hidden Side sets are also playable on their own. Can you talk about that please?

Luis: Yeah, for the physical part you have the models and the minifigures have a possessed version. So in all the sets they comes with an extra head which is possessed, so the kids can actually role play in the physical world – “oh my character is getting possessed” – and then we mixed other cool new elements in these colours, these are the physical representations of the characters getting possessed.

On top of that in all the places in Newbury we have some transformations, so the kids can role play this transformation, but of course this links really really well with the digital part. Because solving missions or looking for stuff in the AR, you trigger these things in the back then it gets possessed in the physical world.

Murray: We are not trying to move away from the physical play and all the sets themselves are everything you would expect from a normal LEGO set in terms of the play value. I mean, apart from the physical transformation which is cool, if you look at the back, there are all of the details in the school set. It’s not like the playsets are not up to the normal standard or coolness from the physical side, all we have done is take these already cool sets and added the digital layer to it.

What we have in the app are these “hands on bricks” moments and that is about trying to bring the kids back from the phone into the model all of the time, as Luis said, the app prompts you at certain times in the game to trigger these transformation moments and that then affect the digital side. So what is different about this to many mixed reality experiences is the physical world actually changes what the digital layer does.

The box art is different to typical LEGO boxes. Can you explain why that design choice was made?

What led to the name change from Hidden to Hidden Side?

Murray: It wasn’t an area that either of us were really dealing with but it is just one of those things, like a lot of the things in concept stage, where we try out different things and see what works and what doesn’t. We ended up with Hidden Side, which I think is a cool name it encapsulates this idea of this duality that we are trying to build into the theme, the ghost realm, the real world, the digital layer, the physical layer.