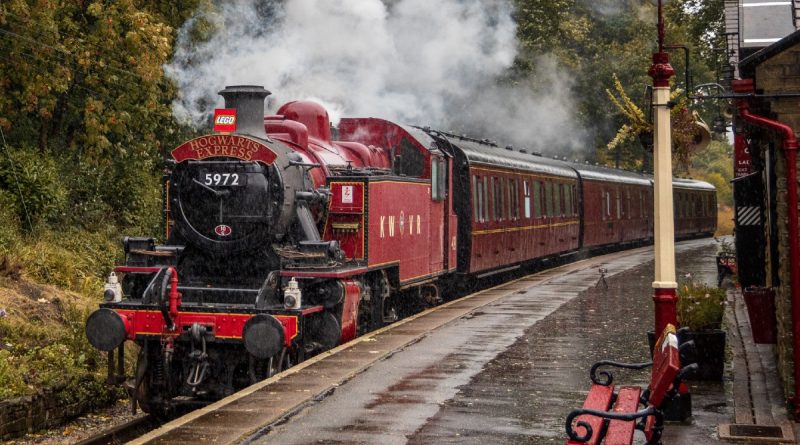 The lucky winners of the LEGO Group’s Harry Potter contest travelled aboard a real-life Hogwarts Express in Yorkshire last weekend.

Launched to celebrate the release of 76405 Hogwarts Express Collectors’ Edition, the competition tasked LEGO fans with answering a quiz in the VIP Rewards Centre in late August. Three families were selected from those who answered correctly, and received a prize package that included a ride and overnight stay on the real Hogwarts Express – sort of.

The Keighley and Worth Valley railway renumbered its LMS Ivatt No. 41241 to 5972 – matching the serial number of the Hogwarts Express – and added a new headboard, with the train’s name and the LEGO logo capping off the makeover. The interior was then decked out with plenty of Harry Potter merchandise and décor, including a variety of LEGO sets.

The journey began at Oakworth Station, which had been transformed into Hogwarts’ Great Hall for a veritable feast (presumably with fewer magically-appearing foods). After dinner, the winners hopped aboard the train for a private screening of a Harry Potter film, before retiring to the ‘Common Room Carriage’ for an overnight stay.

Following breakfast the next day, the winners walked away with copies of 76405 Hogwarts Express Collectors’ Edition to recreate the experience at home. It’s hard to beat a good day out in Yorkshire, and especially not one that involves LEGO and Harry Potter.

The LEGO Hogwarts Express doesn’t run on the Keighley and Worth Valley heritage line as standard, but you can head over to the railway’s website for its regular timetable. You’ll just have to visualise the LEGO and Hogwarts Express logos, but what’s a Wizarding World without a little imagination?

76405 Hogwarts Express Collectors’ Edition is available now. Check out our review here, and head over to LEGO.com to secure your copy.