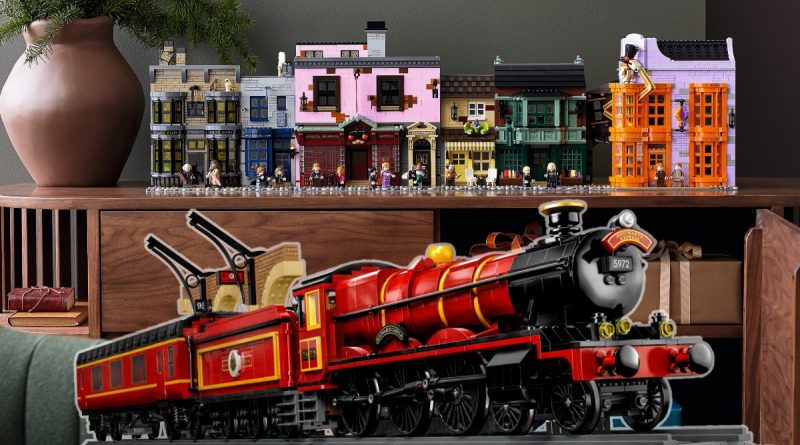 If you want some context for just how big the newly-revealed LEGO Harry Potter 76405 Hogwarts Express Collectors’ Edition is, maybe this will help: it’s longer than 75978 Diagon Alley is wide.

As any owners of 2020’s Wizarding World direct-to-consumer set will tell you, it’s wide. Each of its four buildings is constructed on a 16×32-stud baseplate, which are then connected lengthways for a sprawling street that’ll take up almost any shelf you place it on. The final build comes in at a whopping 102cm wide, or just over the width of four modular buildings (the extra 2cm is from balloons sticking out of Weasley’s Wizard Wheezes).

It requires an incredible 5,544 pieces to make it happen – the most of any LEGO Harry Potter set – but 75978 Diagon Alley is about to lose its medal for the longest or widest Wizarding World model of all time. That’s because 76405 Hogwarts Express Collectors’ Edition measures an almost unbelievable 118cm long, making it easily one of the biggest LEGO sets of all time along a single axis.

If you’ve got 75978 Diagon Alley on display, break out a tape measure and run it to 16cm, then place it next to the edge of the magical shopping street. That’s how much space you’ll need for 76405 Hogwarts Express Collectors’ Edition. (It’s also 26cm tall and 20cm deep, but compared to the length those dimensions seem relatively sane.)

The biggest version of Hogwarts’ train to date uses a total 5,129 pieces, and includes 20 minifigures to populate both the carriage and its slice of King’s Cross Station. It will be available to purchase from August 31 for £429.99 / $499.99 / €499.99, making it the most expensive LEGO Harry Potter set of all time, too. Medals all round…