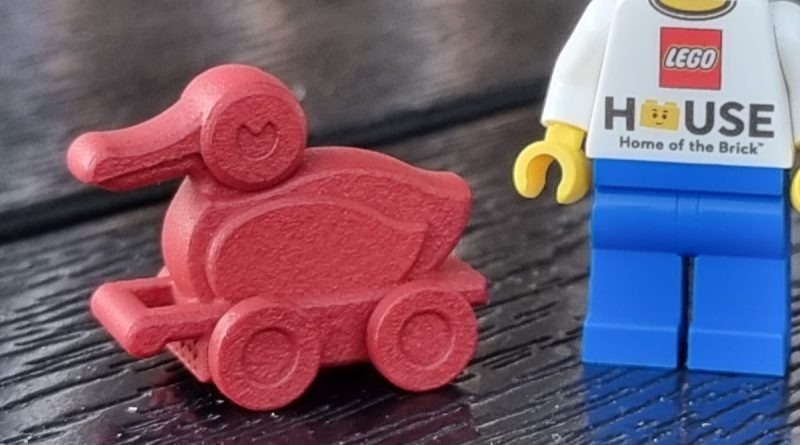 Visitors to the LEGO House’s adult fan event have been gifted a 3D-printed duck, which – through a combination of magic, imagination and engineering – works just like the real thing.

The classic wooden duck is a piece of LEGO history, recreated in modern bricks for 2020’s 40501 The Wooden Duck, which is available exclusively at the LEGO House in Billund, Denmark. And while that 621-piece set includes a display stand, the real magic happens when you lift it off and pop it on a flat surface: pulling the string turns the wheels and snaps the beak, just like the wooden duck from 1935.

Instead of the rigid wire used in the original toy, though, 40501 The Wooden Duck uses a combination of Technic elements to achieve its internal mechanism. Which is pretty impressive… but maybe not as impressive as the tiny 3D-printed duck handed out to LEGO House visitors yesterday, which recreates all the same functions of its bigger siblings on a much (much) smaller scale.

The diminutive red duck is smaller than a LEGO minifigure, but still manages to pack in all the same functionality of turning wheels and snapping beak when pushed along. According to one Instagram user who got their hands on one, the duck is the ‘first ever official 3D-printed LEGO element’, but its availability beyond yesterday’s LEGO House AFOL Day is uncertain at this stage. In all likelihood, it’ll probably be exclusive to attendees.

If you’re lucky, you might be able to snag one on the aftermarket, but chances are these tiny ducks will end up selling for a pretty penny – perhaps even more than 40501 The Wooden Duck, which currently starts at around £95 on BrickLink.