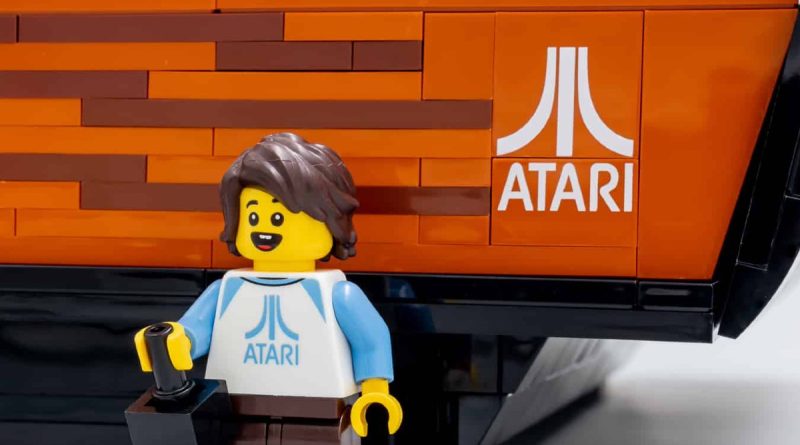 The latest LEGO ICONS set is a vintage video game model wrapped in nostalgia – but how has 10306 Atari 2600’s retro flair fared with the community?

That essentially defines the initial target market for 10306 Atari 2600, but can this 2,532-piece replica find an audience both within and beyond its primary demographic? That’s the challenge laid out before the newest addition to the LEGO ICONS set, and it’s one that the LEGO community has thoroughly evaluated in early reviews. Let’s see how it’s shaping up with those who already have their hands on the console…

“This model features incredible detail and could perhaps be mistaken for the actual console, especially given its accurate size,” writes Brickset, giving what just might be the highest praise possible to a set designed first and foremost as a replica of a real-world object.

In fact, 10306 Atari 2600 is apparently as close to life-size as it’s possible to get with LEGO: YouTuber BrickinNick whipped out the tape measure to compare, and it’s almost exactly 1:1 scale with the real video game system. Nobody has yet placed the LEGO model next to its source material for a more definitive comparison, however…

You may not be able to plug 10306 Atari 2600 into your TV and play any of its three cartridge games, but that doesn’t mean it’s completely functionless. Like most LEGO ICONS (or even just 18+) sets, it’s a lesson in LEGO maths, combining bricks in inventive ways that have seemingly shattered at least one reviewer’s grasp on geometry.

“Even though I built it all, I am struggling to properly wrap my head around how this is working,” says BrickinNick, immediately after finishing the assembly that allows the set’s hidden bedroom diorama to pop up out of the console. This is where you’ll find 10306 Atari 2600’s only minifigure, frozen in time inside a pitch-perfect encapsulation of an ‘80s childhood.

“I know I put in pieces that would force this to tilt upwards, but just the way it clicks into place… Once again my mind is being blown on how these designers can figure out that these angles are even doable.”

The build experience hasn’t been universally well-received, though. “The assembly of this model is not the ultimate creative challenge, and it is only the subassembly which includes the switches, the joystick and the kid’s room that bring a bit of fun,” Hoth Bricks writes, suggesting that the choice of console is to blame for the ‘relative monotony’ of the construction process.

It’s not as iconic as the NES, but Atari fans will love it

The Nintendo Entertainment System sold nearly 62 million units worldwide over the course of its lifespan. That’s more than double the Atari 2600, which topped out at 30 million units in total – despite being in production for two years longer than the NES. While that’s still a sizeable audience for the older console, it means 10306 Atari 2600 is already fighting an uphill battle next to 2020’s 71374 Nintendo Entertainment System.

“This new console is in my opinion to the NES what 10304 Chevrolet Camaro Z28 is to 10265 Ford Mustang: a little less sexy [set] that will highlight another construction on the same shelf, by playing on the range and collection effect,” Hoth Bricks says. “Although it was the first console for many children, the Atari VCS is not at the level of the NES when it comes to evoking the cross-generational aspect of the product.”

But if you did grow up with the Atari 2600 plugged into your TV? “I think any Atari fan would be so, so proud to have this beautiful set on display,” BrickinNick says.

It’s an odd choice of games

“I would have preferred Pitfall, Pac-Man or even Space Invaders to the Centipede, Adventure and Asteroids games, but it will be up to everyone to have an opinion on the selection offered based on their childhood memories,” the reviewer writes, citing a game that was originally rumoured to be included in the set, and the platform’s two best-selling games of all time in Pac-Man and Space Invaders.

By contrast, the included games in 10306 Atari 2600 are only the console’s sixth, 14th and 17th best-selling titles, with Adventure shifting just 1 million copies across its lifetime (compared to Pac-Man’s 8 million and Space Invaders’ 6.2 million). For its part, Brickset suggests that the absence of Space Invaders, at least, could be a licensing issue.

The extras only exist to justify the price point

While 10306 Atari 2600 doesn’t include a TV, as per 71374 Nintendo Entertainment System, its part count (and price) still rivals that of its predecessor. That’s partly due to the increased size of the console – now to scale with its source material – and partly thanks to the very many extras included in the box, from the cartridge storage to the video game vignettes. Unfortunately, most of these additional elements apparently feel superfluous.

“The price of £209.99, £239.99 or €239.99 feels expensive to me, despite the addition of several accessories,” writes Brickset. “Most are nice, but their inclusion was arguably unnecessary and I think a less expensive version of this set, containing fewer auxiliary items, would be more enticing.”

Hoth Bricks says as much, adding a suggestion for a pared-back version of the set: “I think that many slightly nostalgic fans would have gladly contented themselves with the console, its controller and one or two cartridges to stay under the €200 mark.”

Is 10306 Atari 2600 everything video game connoisseurs of a certain vintage could ask for? The answer from these reviews is yes: and more. Perhaps, in a way, too much more. The LEGO ICONS set justifies its lofty price tag by way of everything included in the box, from the console and joystick to the games, vignettes and cartridge storage. But did it really need all those things? Did it need to be a £209.99 / $239.99 / €239.99 set?

The end result is that Atari fans will find a lot to love here – more than they might have wanted – while those without a personal connection to the classic console will find it easy to pass up. One for the die-hards, then.