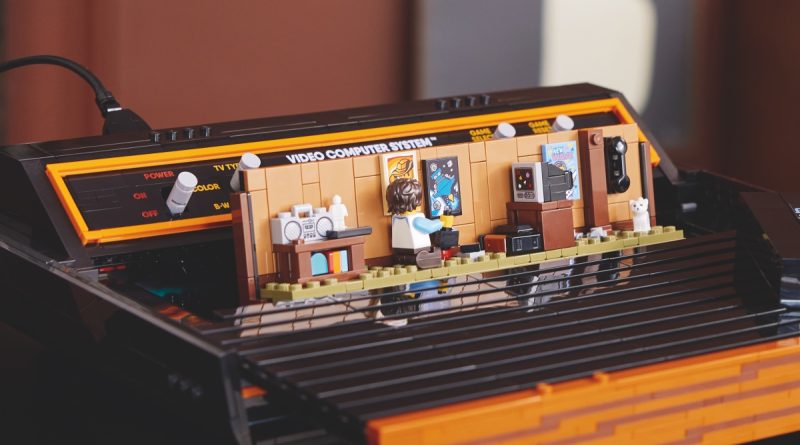 The arrival next month of 10306 Atari 2600 will see the debut of yet another brick-based retro gaming console, following in the footsteps of 2020’s 71374 Nintendo Entertainment System. The 2,646-piece set includes the classic gaming hardware, a joystick controller and recreations of Asteroids, Adventure and Centipede cartridges.

In addition, 10306 Atari 2600 also features three tiny buildable dioramas, each one based on those hugely-successful games, plus a section of the console slides out to reveal a minifigure-scale scene of an ‘80s living room.

However, the final LEGO model could potentially have been quite different, if the original rumours circulating around the set are to be believed. First reported by Promobricks earlier in the year, 10306 Atari 50th Anniversary Gaming Console (as it was then referred to) was said to include a playable recreation of the famous Pitfall! video game. Follow-up stories from the same source a few months later went on to suggest that the assumption was possibly based on a prototype of the model, hence the suggested design change. As usual with all rumours, nothing is confirmed until officially announced by the LEGO Group.

Released in 1982, Pitfall! was designed by David Crane and released by Activision. The title was incredibly popular and went on to sell over five million copies worldwide. Whilst it’s possible that Pitfall! might have been featured in an earlier version of the set, it makes sense that the three game cartridges included with the final set are all based on Atari titles, potentially negating the need to negotiate a separate licensing deal with Activision.

With all that in mind, it’s interesting to note that there’s a poster of Johnny Thunder displayed on the wall of the interior diorama of 10306 Atari 2600. What’s odd about that is that the character didn’t appear until the ‘90s, but could his appearance be a subtle nod to the platform adventure theme of Pitfall! and its Indiana Jones-style protagonist, Pitfall Harry?