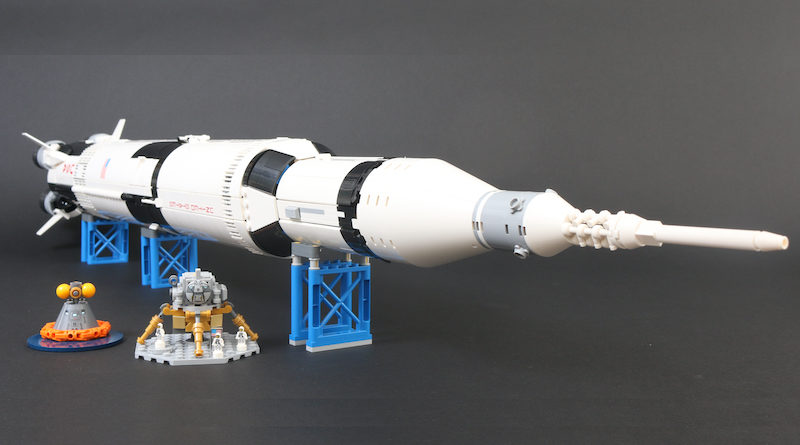 Originally released three-and-a-half years ago as set number 21309, the LEGO Ideas NASA Apollo Saturn V is set for a second lease of life with a late 2020 release, under a new set number, 92176.

The change in number is a formality due to the first version of the set having stopped production, as otherwise the LEGO set being released appears to be identical to the original. Whilst some LEGO sets to have come into the LEGO Group’s recent strategy of re-releases and upgrades have been puzzling – who was asking for a second Taj Mahal? – this reissue of 21309 NASA Apollo Saturn V as 92176 NASA Apollo Saturn V is more than welcome.

Capturing an iconic vehicle from the history of space travel in such size and LEGO accuracy, 21309 proved an instant classic. Its popularity upon release in June 2017 saw the LEGO Group caught out, as it sold out instantly in stores and online and took several weeks (and a few waves of releases) to be restocked.

Coming in at a piece count of 1,969 (a nod to its successful mission in 1969 to take the first astronauts to the moon), it’s immediately clear that even at microscale, there’s plenty of detail and complexity built into the model.

And that’s immediately apparent from the very first set of numbered bags. What may seem like a long black and white cylinder is in fact a multi-directional construction, and a particular achievement of both the fan designer who conceived the initial model, and the LEGO design team who were given just six weeks to turn it into a consumer-friendly official set.

Right along the interior shaft to the rocket is a circular build skilfully achieved with what is otherwise fundamentally a square building system, and every step of the build process is fascinating for it. At the same time, for the solidity and relative simplicity the completed model achieves in appearance and exterior construction, there’s still likely more expertise and intuition that has gone into 21309 NASA Apollo Saturn V than can really be understood or realised.

It’s most fitting that such a great deal of ingenuity has gone into the design of 21309 NASA Apollo Saturn V – and the reissued 92176 NASA Apollo Saturn V – and it makes for not only a fulfilling and unique build experience, but an excellent final display piece. As a completed model, it comes in at an impressive size and weight, with the scale in particular used to the designers’ advantage to capture a number of more subtle changes in texture, direction and detail across the rocket’s bodywork.

The LEGO set also breaks into three separate sections to reflect how the real-world version does so during a three-stage liquid-propelled take-off sequence. Whilst that means holding the model by the top end alone will see it break apart, otherwise the connections between the sections are solid and secure enough to keep it firmly together.

Also include are micro-builds of the lunar lander that the rocket was tasked with transporting to the moon, and the command module that landed back on earth with the astronauts safely on board.

Three nanofigures are included to represent the three-man teams that the Saturn V transported into space from 1968 and to the moon from 1969 to 1972. Perhaps a decade ago the novelty of receiving LEGO representations of the astronauts in the form of plain white nanofigures would have been enough, but the fine prints that capture a great amount of detail from their suits is remarkable and truly elevates the quality, finish and authenticity of the entire set that much further.

For £119.99 comes a model full of complexity, points of interest and authenticity. For an iconic, instantly recognisable vehicle of space flight, this is a faithful and intuitive build. There’s little to fault the original 2017 price for.

The Saturn V remains an iconic vehicle in the history of space travel. It’s the only launch vehicle to carry humans beyond low Earth orbit, it’s the tallest, heaviest and most powerful rocket ever brought to operational status and across four years of operations and 13 flights, it took 24 astronauts to the moon.

Alongside such a distinguished place in history, the rocket holds an equally unique place in design, from the shape of its bodywork to the black-and-white colouring and the red ‘USA’ and American flag painted on. There’s nothing that came before that looked anything like it, and nothing that has come since.

Importantly, everything that makes the Saturn V an icon of time, history and design is captured within 21309 NASA Apollo Saturn V – and the soon to be 92176 NASA Apollo Saturn V. Its functionality as a rocket has been loving recreated in numerous details and in how the model breaks into three to reflect the lift-off sequence; its history in transporting astronauts to where no man has gone before is shown in the mini lunar lander and command module; and its truly one-of-a-kind, awe-inspiring design is wonderfully reflected across a large and imposing LEGO model.