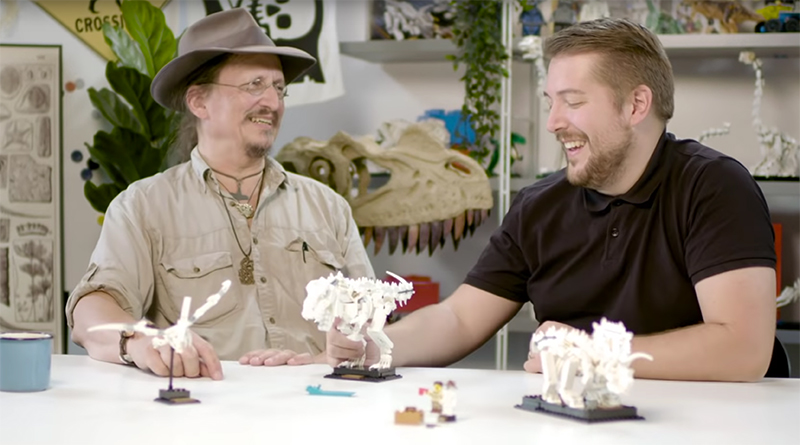 A new video reveals a taste of what went into the design of LEGO Ideas 21320 Dinosaur Fossils.

LEGO Ideas 21320 Dinosaur Fossils is due for release on November 1 exclusively at LEGO.com. This new LEGO behind-the-scenes video reveals what went in to developing the 910 piece set that builds a T-rex, Triceratops and a Pteranodon from fan designer’s Jonathan Brunn original concept.

“When we had the LEGO Ideas submission come through and we decided that we were going to go ahead with it, there was only one person in the building who really stood out as being a dinoaur expert and we really wanted to give him the opportunity to work with us as the designer,” reveals LEGO Ideas Design Manager Sam Johnson.

“Everyone knows I love dinosaurs, and actually make dinosaur skeletons in my spare time too,” says Niels Milan Pedersen, the long-serving LEGO design expert who Sam sought out. He took on the project enthusiastically, building around 50 dinosaur skeletons that could be used in the set.

As the Brick Fanatics review of the model suspected, the skeleton’s hat is inspired by Niels’s own style. He has worked at the LEGO Group since 1980 and actually designed the classic LEGO skeleton – in Brick Fanatics Magazine Issue 10, he reveals previously untold stories from working on the original LEGO Pirates theme.

A launch event for 21320 Dinosaur Fossils is taking place in France on Friday.