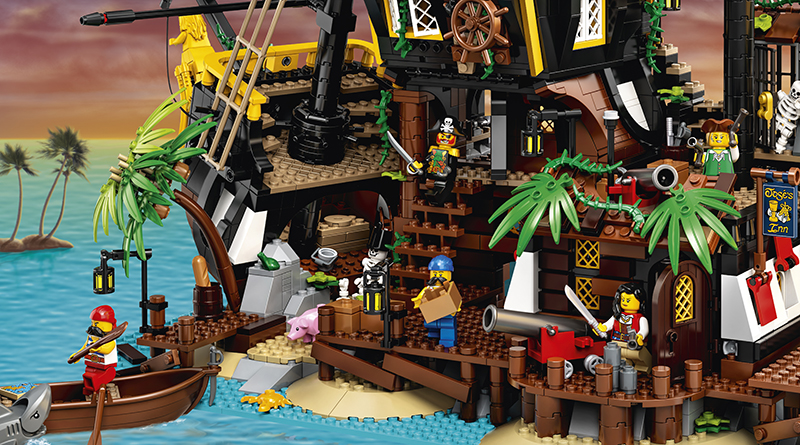 LEGO fan Pablo Sánchez Jiménez saw his product idea, The Pirate Bay, achieve 10,000 votes on the platform in less than a month. His design was clearly popular, but when LEGO Model Designer Milan Madge adapated it to become an official LEGO set, he increased the size and added dozens of references to classic LEGO Pirates.

The resulting set, LEGO Ideas 21322 Pirates of Barracuda Bay, is a model that no-one will complain moved away from the original design. In this exclusive interview, Brick Fanatics asks Milan about the challenegs of adapting Pablo’s concept.

While the original fan submission’s influence is clear, this has moved a lot closer to the classic LEGO Pirates than that model was. Was Pablo happy with the shift in direction?

In my first meeting with Pablo, it wasn’t worked out at the time, but I showed him a version of the model that was his model with some tweaks to make it the same colour scheme, then I showed him the version of the Black Seas Barracuda I had made. He was absolutely overjoyed and he just gave the full go. He was like “yeah, you need to get the ship in the model, absolutely”. It was right at the beginning and then most of the development was scratching my head about how to cram this boat in without it looking too obvious.

On Pablo’s original model, the Captain’s quarters is kind of reminiscent of the stern of a ship. I think it was meant to be that bring grand statement piece, there was like a bit of a ship graveyard thing at the front so we just wanted to connect the bits that he had already put in there and go one step further.

Some pieces from the 1980s/1990s are still in production, others aren’t. How did you replicate the feel of LEGO Pirates despite not having the full range of elements the sets used available?

Some of those pieces are available, the ones that aren’t posed a real challenge. The palm trees for example – I would love to have the original palm trees that Pablo used in his model.

I built a model yesterday, I was building the Aquazone Neptune Discovery Lab and the baseplates are amazing, they give such a huge impression and a really quick start for a kid to have quite a mass to play with. They had their downsides as well. I think when I built Pablo’s original Pirate Bay model, his model is a beautiful digital model, but when I built it physically you couldn’t pick it up because the baseplates had so much warp in them that all the bricks start flying off in every direction.

When you create something as big as Pirate Bay you need the structural rigidity that the standard LEGO bricks give and actually that’s something we found with the model. I think what we ended up doing was maybe delivering a very LEGO experience in that all of these bits are now built out of multiple elements.

Even some of the shape pieces on the back of the Black Seas Barracuda, the original one, we have managed to replicate out of current LEGO parts. So I think there is a balance between giving nods to elements that were really iconic in the original design and then pieces that we didn’t have we forced to make alternatives.

Austin [Carlson, the set’s graphic designer] and I were very aware that the original is a model that means so much to so many people and we didn’t want to move away from it if possible. We didn’t want to change too much because the things that we love about it are those small details.

It didn’t work, but I had versions where we had inverted flowers on the back of the model, I had some versions that were incredibly close. But I also tried moving away from it sometimes. The pieces about above the windows, I actually made a version with different window frames and in the end decided the original is incredibly good, there was a reason it was like that – so why change it? It worked well the first time.