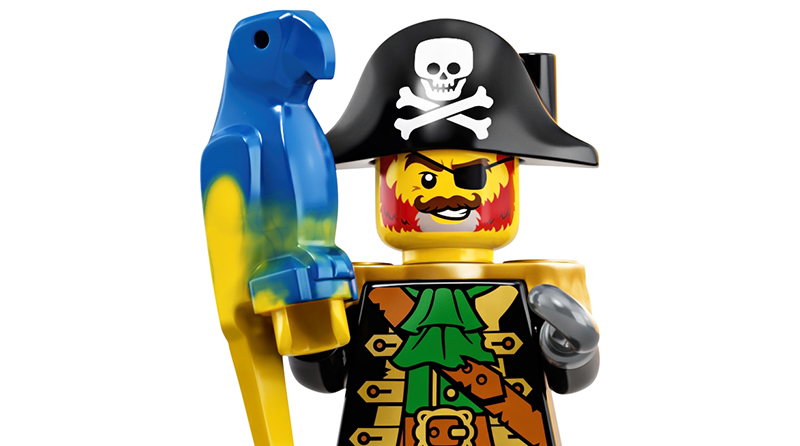 Classic minifigures are refreshed for LEGO Ideas 21322 Pirates of Barracuda Bay, with the designers imagining how 30 years shipwrecked has changed them

The newly announced LEGO Ideas set, 21322 Pirates of Barracuda Bay, makes it clear that classic LEGO Pirates are back. The original minifigures have been brought up to modern design standards – and subtly changed, to show how the passage of time has affected the crew of buccaneers. Here is a look at each of them…

The classic LEGO Pirates character, also known as Roger, has been updated for the modern era. This is not the first time he has been recreated with modern sensibilities, as the character was directly recreated in the 2015 theme and heavily influenced Captain Brickbeard in the 2009 edition.

This minifigure is clearly based on the character who appeared in many of the LEGO Pirates sets wearing a tricorne hat. It seems that his bad eye has changed over the years, but otherwise he looks very much like the same pirate he always was.

These minifigures are inspired by the common striped vest Pirates that came in many of the classic sets, including 6285 Black Seas Barracuda. Described as the Broadside brothers, the design team are clearly having some fun with their similar appearance. The new moustache element allows their facial hair to be more impressive than ever.

Adapting the design of the minifigure she seems to be based on quite significantly, there are a couple of clues that Lady Anchor is influences by the one female pirate in 6285. Her necklace is the same style as the 1989 minifigure as well as the red-and-white colour scheme being a match.

At the tail end of the original LEGO Pirates theme, a pirate with an anchor tattoo turned up. He clearly hasn’t stopped his passion for getting inked while stranded, as since then he has added two mermaids and parrots to his look.

Robin Loot’s torso looks like it is inspired by a few 1996 minifigures, which also had green waistcoats over white shirts. Perhaps for better gender balance though, this character is a female pirate rather than angry moustached male. The instructions reveal her to be the former gunner of 6250 Cross Bone Clipper, so perhaps the female pirate in that set pinched the male pirate’s clothes.

This little fellow follows the LEGO Pirates tradition of mixing-and-matching shirts and hats to create completely different, unique characters. His nickname is a nod to the British name for 6285 Black Seas Barracuda, which was the Dark Shark.