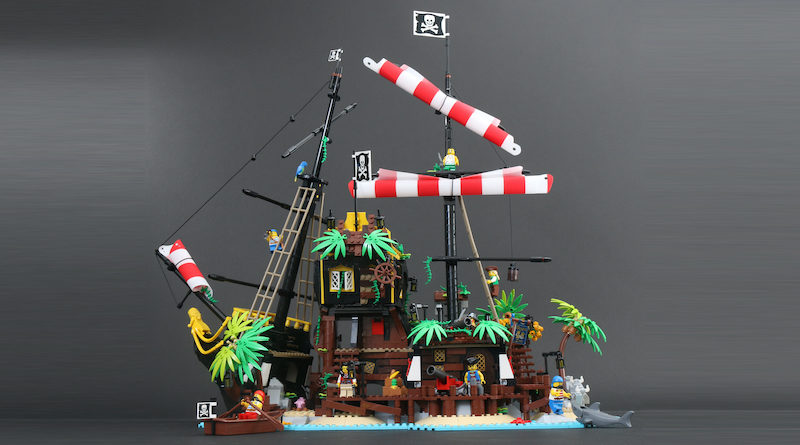 Authentic to a unique history and repackaged for a new, modern builder, 21322 Pirates of Barracuda Bay converts a fantastic Ideas project into the ultimate LEGO Pirates adventure.

In taking an already very interesting Ideas project and turning it into a full-blown Pirates set straight out of 1989, the LEGO Group has created a masterpiece that appeals to LEGO fans across the generations. For younger LEGO builders, 21322 Pirates of Barracuda Bay is the ultimate first experience of everything that made LEGO Pirates great for kids back in the 1980s and 1990s, and for older LEGO fans, this is a nostalgic trip back in time, with the added bonus of the design standards of 2020.

It’s also massive, and that shouldn’t be overlooked. Coming in at 2,545 pieces won’t raise too many eyebrows by today’s standards, but no Pirates set before has ever even reached 1,000 pieces. 21322 Pirates of Barracuda Bay well and truly breaks new ground for an old theme.

Pirates was a landmark theme for the LEGO Group. Emerging in 1989 as only the company’s fourth-ever theme, it captured the imagination of the adventurer before Johnny Thunder came along and brought story and conflict way before the LEGO Group even knew what a big bang theme was. Pirates introduced huge ships and towering forts, and it was a theme packed with plenty of colour and new pieces that opened up a whole new world of play and creativity.

Its eight-year run saw the release of just over 50 sets, and increased shelf lives for a lot of those meant many children’s first experiences of LEGO through the early 1990s were with this theme, and any one of the classic models it included.

Everything every adult fan of LEGO today will fondly remember about LEGO Pirates is once again sat in front of them in the form of 21322 Pirates of Barracuda Bay. This isn’t just a cliched ‘love letter’ to Pirates, from the box art to the minifigures and everything in between – it’s the latest release in the theme, albeit under the guise of the LEGO Ideas line, and 23 years since the last Pirates set came out.

There aren’t just clear and obvious nods to the Pirates theme throughout 21322, though: the whole set belongs to that era from our childhoods. From the colours and characters included to the specific design of the ship, this is a step back in time for older LEGO fans, with 2020’s LEGO design standards to boot.

Just as importantly, though – with that adult appeal, those modern design techniques and the sheer size and scale of this LEGO set in mind – 21322 Pirates of Barracuda Bay remains a relatively accessible build for younger LEGO fans, too. Not every LEGO set can achieve the balance between adult and child appeal, but 21322 is a fine example for how it is possible.

Most interesting is that, with consideration to the main play point that the three sections to the shipwreck can combine to create a completed ship, they are first and foremost constructed as part of the overall island, in their wrecked state. Each ship section’s connections to the parts of land are minor, but still secure enough should you slightly knock into it (and you may do so given the height and width the completed model comes in at).

It is with the completed model in front of you that the order of construction will then seem most obvious because, for however tempting it is to put together the three sections of the wreck to create the ship, each section’s integration into the island is wonderfully realised. There’s the sense that this wreck has been like so for years and life has been lived in it, around it and through it in that state, with walkways leading into sections of the ship and plant-life covering all kinds of areas of it. For what it used to be and for what it can turn into as a ship, this new life as a wreck makes for an engrossing, enormous LEGO set packed with rooms, various passages, different levels and hideaways – it’s a wonderful starting point for hours of story and play, across the front and back of the model, as well as inside each section of the wreck.

Taking each part of the ship out of the island base and putting them together requires a further bag of pieces and quite a lot of unbuilding. It’s an unusual experience with a LEGO set and does make the switch to the completed pirate ship more of a commitment than one may immediately expect or hope for. Rebuilding back to the wrecked state will require a keen eye.

That aside, what you end up with as a pirate ship is truly splendid, from the obvious tributes in aesthetic to 1989’s 6285 Black Seas Barracuda to the imperious size that is realised in height, length and breadth. It’s packed with detail and measures as one of the largest pirate ships that the LEGO Group has ever produced.

The eight minifigures included are a great call-back to the original Pirates line from 1989, with modern design standards and details applied to them. These are most keenly felt in the updated Captain Redbeard, who in this appearance is beginning to show his age with a few grey hairs in that ginger beard.

The tattooed bare-chested pirate is a fantastic design and a highlight of the line-up, alongside one of the female pirates who comes with a recolour of the same hat and hair piece that also came in the recent Collectible Minifigure series. Her outfit is another reference to a minifigure from the original Pirates line.

Whilst there is a skeleton with a familiar hat to be found in the build, one notable exclusion from the line-up is an imperial soldier of some sort, perhaps even just in ragged clothes. Expect their price on the secondary market to rise even further…

This is an incredibly expensive year for LEGO sets (even as most years are), so it is with consideration to the other £100+ sets that we compare 21322 Pirates of Barracuda Bay, and favourably so. Priced at £179.99, this set offers genuine value for a number of factors including the 2-in-1 nature of the build, the sheer scale of the set, and the truly immersive final model that it all creates.

Ongoing interest in Pirates as a theme makes for an aggressive aftermarket and means that £180 might just buy you 6285 Black Seas Barracuda, or go halfway to 6276 Eldorado Fortress – a lot of money for LEGO pieces as old as you and me. For what you get within 21322, as not only a taste of the classic theme, but a full-on, brand new addition to it and upgraded to 2020 design standards, £180 represents real gold for Pirates fans new and old. It’s one of the best value opportunities to get into the theme right now, be that for the first time or once again.

It may require a bit of saving to afford, but such is the quality of the LEGO set, you won’t regret a single penny (and I write this having bought this set myself). This is not a price where the LEGO Group could be accused of trying to exploit the older fan’s nostalgia for the theme. Instead, it’s a price for which the LEGO Group delivers excellence across the board.

21322 Pirates of Barracuda Bay is a combination of so much excellence and LEGO goodness. By adapting a classic LEGO theme to modern design standards, parts selection and scalability, adding in the thematic twist of the original LEGO Ideas project this was originally based around (a converted wreck) and then adding the 2-in-1 element on top of all that, this is a LEGO set like no other, with universal appeal across generations of LEGO fans.

It carries all the charm and draw of LEGO Pirates, expanding on a universe now 30 years old, whilst also offering a fresh, playful set full of fun and creativity for younger builders.

This set was not provided for review by the LEGO Group. I bought this, it’s great.

Support the work that Brick Fanatics does by purchasing your amazing LEGO Pirates sets through one of our affiliate links. 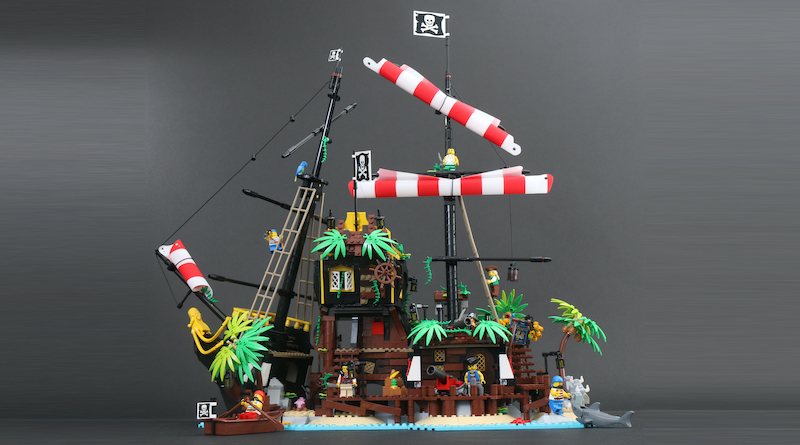