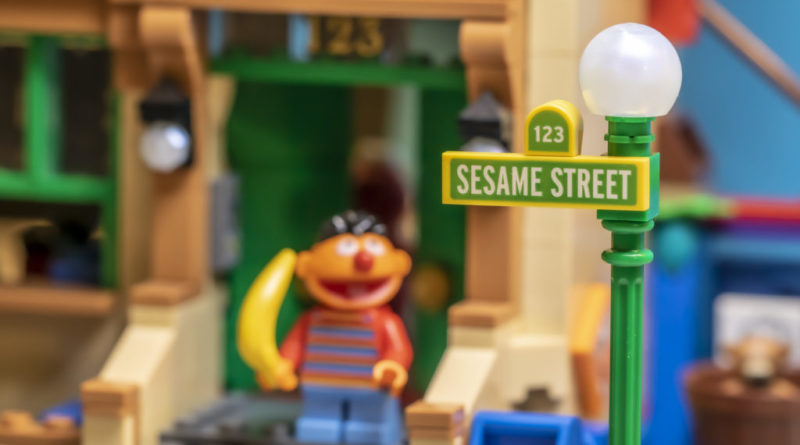 LEGO Ideas 21324 Sesame Street is absolutely packed with references to the beloved television show. Brick Fanatics picks out 10 of the best deep cuts found within the set

LEGO Ideas 21234 123 Sesame Street is a great love letter to the incredibly long running children’s television series. The set contains over 50 Easter eggs and references (that’s one for every season since the show began). In this list, Brick Fanatics picks out 10 of our favourites…

First introduced in 1978’s Season 9, Alistair Cookie is the alter ego of Cookie Monster. Dressed in a red smoking jacket, and originally seen smoking a pipe (the pipe was removed in the late 1980s), Alistair Cookie would host the seemingly high brow Monster Piece Theatre from the comfort of his yellow arm chair. Monster Piece Theatre was a much loved sketch throughout the 1970s and 1980s and Cookie monster continued to portray Alastair Cookie until the character was retired in 1992.

Sesame Street is well known for its songs and one of the most loved is the ‘Pinball Countdown’, which teaches children how to count up to 12. First introduced in 1976, the animation featured a psychedelic pinball machine accompanied by a musical arrangement reflecting the popular musical styles of the 1970s, most notably funk and jazz. For anyone who grew up in that era the song was a constant ear worm. What the younger viewers may have missed is the fact the vocals were provided by legendary R&B group The Pointer Sisters.

Stinky the stinkweed
found on the fire escape

Despite his offputting name, Stinky the Stinkweed is actually a very friendly plant, and one who is incredibly self conscious about his unfortunate stench. First appearing in episode 3133 (Season 24), he was original planned to be a one off character but eventually became a recurring character all the way through to season 45.

Bert’s beloved pet pigeon, Bernice, has been by his side for decades. In contrast to the numerous other birds in Sesame Street, Bernice is actually played by a real pigeon. Bert has taught Bernice to play checkers, although he claims she’s not very good, having only beaten him twice in ten games.

Dorothy is Elmo’s pet goldfish and, like Bernice, is portrayed by a real life animal. She first appeared in a segment in Elmo’s World in 1998 and has been by his side ever since. Since Season 47 onwards she only appears in animated form

A small alien spacecraft, complete with 3l bright green bar to represent the other worldly beings inside, is a nod to Sesame Street’s resident martians. Debuting in 1972 and better known as the Yip Yips, these interplanetary visitors from Mars have come to Earth presumably for research purposes, or maybe just a holiday. What makes them so endearing is their abject fear of mundane earthly objects that populate Sesame Street, including computers, telephones and even clocks.

Radar has been Big Bird’s most prized possession since Season 10. Many storylines over the years have featured Radar, including episode 3922 when he was torn, episode 3384 when he went missing and episode 4714 when Radar was accidentally sold in a garage sale – don’t worry though, it was The Count who bought him and quickly gave him back when he realised who he was.

Radar even helped Big Bird regain his memory when he contracted memory flu (episode 3396). Radar was named by Carol Spinney, the actor who played Big Bird as a tribute to the character Walter ‘Radar’ O’Reilly from the TV comedy M.A.S.H – who in real life was an activist in support of bird preservation.

Bert has an extensive book collection, with a surprising amount based around oatmeal. What makes this book special is it features in one of the best-loved Sesame Street sketches of all time.

First appearing in episode 798 we see Bert trying to relax while reading Cooking with Oatmeal. Ernie tries to get him to participate in a rhyming game, and as usual Bert becomes increasingly annoyed with the disruption, but just as he is starting to enjoy it, Ernie ends the game.

Part scripted, part improvised, there is a moment in which Muppet creator and Ernie performer Jim Henson nearly breaks character but manages to compose himself. It’s as funny now as it was all those years ago. As a further nod to the classic sketch, the inside of the book has a sticker placed on a 1×2 tile listing all of the ingredients that Bert reads out – now that’s attention to detail.

In a more recent episode, airing in 2009, Sesame Street is hit by the news of a winter porridge shortage. Baby Bear and his family must find a cold place to hibernate through the winter or risk going the whole season without any food. It sounds a lot more dramatic than it is, this is Sesame Street after all, and in the end the bear family decide Bran Flakes are just as tasty and give up their plans for hibernation.

‘Banana in the ear’ is another classic sketch that has been replayed many times throughout Sesame Street’s long history. The routine first appeared in the show’s second season, and sees Bert trying to talk to Ernie, only for him to reply, “I can’t hear you, I have a banana in my ear”. It’s a simple setup but one that has proved popular for nearly 50 years.

In  the most poignant and heartbreaking episode (episode 1839) Big Bird must come to terms with the death of his friend and Sesame Street regular Mr Hooper – a beloved character who had been on the show since the very first episode.  When the real life actor Will Lee passed away in 1982, show producers were left with a difficult decision. Do they write him out by saying he’s moved away, or do they tackle the subject of loss head on?

In the end they decided to use his passing as a way to teach young viewers about death and that it’s okay to grieve. First airing in 1983, the episode garnered praise from viewers and critics alike, heralding it one of the most important children’s television episodes of the 1980s. The full uncut episode is even available for viewing in The National Museum of Television and Radio of America.

There are dozens of other hidden references, nods to characters and Easter eggs built into LEGO Ideas 21234 123 Sesame Street. Fans who grew up loving the show will no doubt get immense pleasure in discovering them all.

21324 123 Sesame Street is available at LEGO.com now. You can help support Brick Fanatics’ work by using our affiliate links.