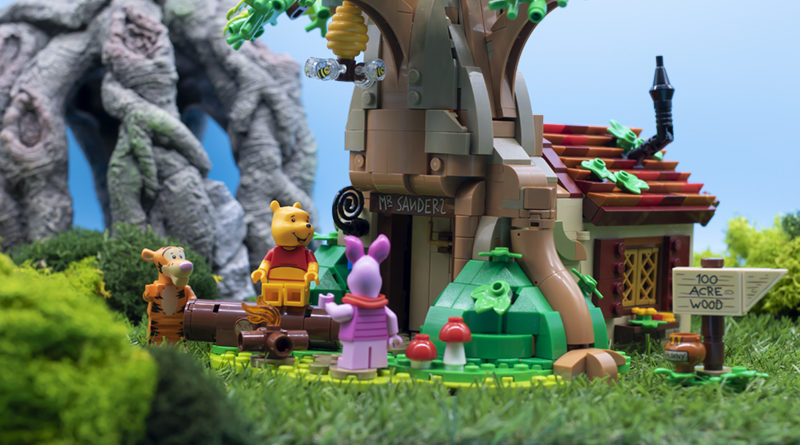 The latest addition to the LEGO Ideas range ventures into the Hundred Acre Wood with 21326 Winnie the Pooh, a set that’s full of charm, nostalgia and delightful references to the stories of A.A. Milne.

Winnie the Pooh is the loveable, innocent, silly ol’ bear created in 1926 by A.A. Milne, who was inspired by watching his son Christopher playing with his teddy bears. Pooh’s stories quickly stole the hearts of children and adults alike, thanks to their charming characters and uplifting philosophy centred around love, kindness and friendship.

In 1966 Pooh and his friends were immortalised by Disney in the first of three shorts, ‘Winnie the Pooh and the Honey Tree’. Two more followed before ‘The Many Adventures of Winnie the Pooh’ combined them into one full-length feature, still regarded as an all-time children’s classic. It’s the Disney animations that this set is most closely inspired by, from the hidden Easter eggs to the look of the exquisite minifigures (which, like those in 21324 123 Sesame Street, have been designed exclusively for this set).

Pooh bear and his gang of chums are instantly recognisable, and conjure up feelings of nostalgia for millions of people who grew up loving his adventures in the Hundred Acre Wood. So will 21326 Winnie the Pooh leave us jumping for joy like an over-excited Tigger, or feeling down in the dumps like a depressed Eeyore?

“Sometimes the smallest things take up the most room in your heart.” – Winnie the Pooh

21326 Winnie the Pooh comes with an 18+ age recommendation, which means we’re presented with another sleek yet fairly dull package. There’s at least a little bit of interest with a sketched fence that surrounds Pooh’s house and a nice pencil-drawn Winnie the Pooh on the side of the box. However, it would be nice to start getting more attractive packaging with these adult-themed sets – just because we’re grown-ups doesn’t mean we don’t want a bit of fun from our LEGO.

The instructions, on the other hand, take a welcome departure from the norm. The LEGO Group has recently committed to phasing out its black-paged manuals, but it seems that change will happen sooner than we thought. The pages here have been replaced by a light grey, and it’s all the better for it. The manual feels brighter, engaging and more in-keeping with the subject matter (so the same approach to the box would have made even more sense.)

Inside the box are seven bags and a small sticker sheet that adds further detail along the way. There are also several rare and new pieces including trans-clear 1×1 round tiles with bee printing, green coral plants, the Technic macaroni tube in medium nougat and the Technic pin connector with four clips in brown.

The build begins with a small brick-built sign pointing towards the Hundred Acre Wood, the forest in which Winnie and his friends live (fun fact for Pooh fans: the location was originally inspired by the Ashdown Forest in East Sussex). The sign comprises tan tiles with stickers adding wood grain detail. Underneath is a small honey pot, printed with dripping honey and Pooh’s ‘Hunny’ label on the side. It’s a nice little addition and sets the tone for the entire build – colourful, fun and full of charm.

The base for Pooh’s House is built upon a series of curved wedge plates and tiles that create interesting shaping. The colour scheme is lovely, and feels accurate for a woodland setting – the mix of greens used for the base and top of the tree feel fresh and spring-like, whereas the house uses more autumnal colours such as tan, brown and dark red.

It’s not only attractive to look at, but also extremely enjoyable to build with. In some respects it’s reminiscent of the experience of putting together 21322 Pirates of Barracuda Bay: the colours of that set evoked the tropics with the azure blues and tans, while here there’s a real sense of being deep in a peaceful forest. It makes for a very mindful and relaxing experience.

Each half of the house is built on to hinges, allowing the building to either be completely closed or opened up for access inside. With the base complete it becomes clear just how compact the footprint actually is – the entire set, from one end to the other, is only 26 studs long, but what it lacks in length it makes up for in height and an abundance of wonderful detail.

Pooh’s bed uses 1×1 round tiles with pin holders, minifigure roller skates and candles in a really unique way. Although brick-built beds are a staple feature of many LEGO interiors, it’s refreshing to see a completely unique design. The colour should technically be sand green as opposed to medium nougat, but it’s a strong design nonetheless.

In fact, every aspect of the interior feels fresh and smart, and the amount of detail crammed into the small space is quite startling. There’s brick-built curtains, a stove complete with chimney, table with teacup and ‘hunny’ pot, a bedside lamp, ‘Pooh-coo’ clock, chair and bed.

These enchanting little builds carry on through the rest of the house, adding to the detail and providing more Easter eggs for eagle-eyed fans to spot. A tea caddy, complete with teapot and tea, a map of the Hundred Acre Wood, an umbrella stand with umbrella and a mirror can all be found in the fairly small hallway.

Every element exudes a delightful charm and as the build progresses to the exterior, the set will continue to bring a lot of satisfaction – the highlight of which is the tiled roof. Two 6×10 plates are clipped on either side, which are then covered with an assortment of 1×1 and 1×2 slopes. It’s a little laborious and requires a bit of concentration, but it’s very much worth it, as the final effect is beautiful.

If that’s not enough, there are even some hidden Easter eggs placed up in the rafters that are only visible once the house is opened up, including three more jars of ‘hunny’ on one side and a crate of Pooh sticks on the other. It’s really a wonderful section to put together.

The most dominating feature of the build is the tree that Winnie’s house is built into, and as a result it’s also the most involved aspect of the build. Once again, the colour scheme feels perfect. The original submission by Ben Alder used dark brown for the trunk and branches, but here that’s been replaced by a combination of medium nougat and dark tan – and while it’s not what you’d normally expect, it certainly works.

The shaping of the tree adds a lot of interest to the model, while feeling natural at the same time. The trunk and branches on either side are all separate sub-assemblies – the branches slot into the trunk via staggered Technic pins that create an angle that’s slightly offset from 90 degrees. It’s clever and looks very effective.

The final stage adds the branches and leaves. It’s a fairly repetitive process, involving 24 separate green coral plants and 72 individual leaf pieces, but it really finishes off the model well and elevates the set into something quite marvellous. Each separate branch is attached using a ball and socket joint and each coral piece is connected by a hinge joint, allowing for a multitude of ways in which the tree can be positioned.

Finally, contained within the tree are several beehives, with printed honey bees surrounding them (no wonder the honey-loving bear chose this tree as his home!).

The finished model is a delight to look at and perfectly captures Winne’s home deep in the Hundred Acre Wood. It’s clear from all the references hidden within that both the fan designer and LEGO design team have done their research and approached the set with the love and attention that the subject matter deserves, creating a set that is simply a joy to construct and a pleasure to behold.

“A friend is someone who helps you up when you’re down, and if they can’t, they lay down beside you and listen.” – Winnie the Pooh

Having spent a good portion of this review waxing lyrical about the many positives this set has to offer, you’re probably expecting the same high praise for the minifigures too. Well, sadly that’s not quite the case. It’s the second time minifigures have been specially-moulded for an Ideas set, and while the moulded elements are brilliant, overall they’re a bit more hit and miss than the main model.

Some are exceptional like Eeyore, consisting of one single mould. He’s a little lacking in mobility, but then Eeyore isn’t exactly known for being full of energy, so it works. Tigger perfectly captures his joyous, fun-filled nature. Piglet also looks very close to what you would expect, especially with his red scarf wrapped around his neck.

Rabbit looks great from the front, but his tail is printed in a very awkward position, halfway up his back. This design is also found on the Easter Bunny Guy minifigure, which works in that instance as it’s a man in a bunny suit. When it’s supposed to be a real tail, though, it just looks weird.

And then there’s the eponymous Winnie the Pooh, the weakest of the bunch. His face doesn’t quite look right when compared to his on-screen counterpart, and the printing on his torso leaves a very thin but noticeable red line along his waist. Winnie the Pooh is such an iconic Disney character and most of the other Disney minifigures are not only incredibly accurate but among some of the best around, so it’s a shame this has missed the mark.

It’s also strange not to have Christopher Robin, as really it’s his imagination that creates the characters in the first place. That said, having five brand new and exclusive moulds created especially for this set still makes them feel special, and they do look good when placed around the different areas of the model.

21326 Winnie the Pooh shares a lot in common with another recent Ideas set, 21324 123 Sesame Street. Both recreate iconic children’s classics, both include exclusive moulded minifigures, both contain pockets of smart design and both have a wealth of Easter eggs for fans to delight in. However, where they differ is the price. Sesame Street retails for £20 more and, in our recent review, we felt it was too expensive for what was on offer.

This set has addressed that criticism and feels perfectly pitched at £89.99 / $99.99 / €99.99, with nearly 1,300 pieces, five exclusive minifigures and a fantastic model boasting a brilliant building experience that offers a lot in both play and display value.

“We didn’t realize we were making memories, we just knew we were having fun.” – Winnie the Pooh

21326 Winnie the Pooh is the epitome of LEGO mindfulness. From the very first step the set oozes a wondrous feeling of calm and joy. The build is hugely entertaining without ever feeling strenuous or overly challenging. The colours complement each other perfectly, and the design is delightful – and in places, ingenious.

It might not be as large as expected, but in this instance the compact size just adds to the charm, and makes displaying it so much easier. The minifigures, for the most part, are brilliant and the fact they are all exclusive will add to their appeal regardless.

For fans of Winnie the Pooh, this set will bring so much delight that it’s an instant must-buy recommendation, but even for those who are not familiar with Pooh bear and his many adventures, there’s still so much to love and enjoy about this set that it’s seriously worth considering.