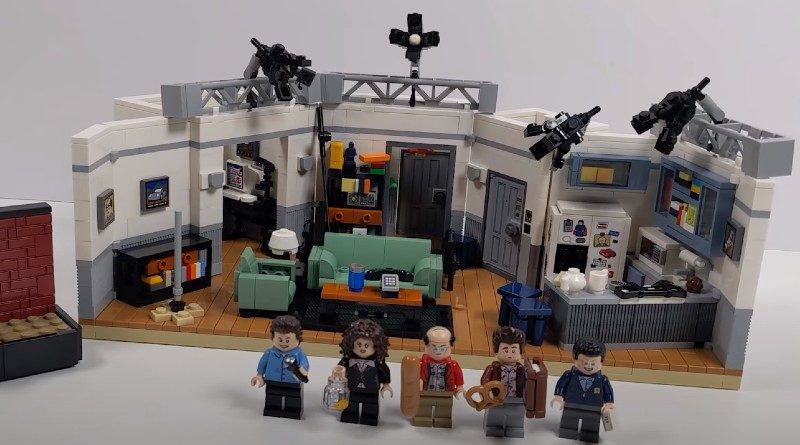 Following the LEGO Ideas 21328 Seinfeld reveal the first reviews for the set have appeared online, giving us a close-up look at the latest sitcom model.

The most recent product of the fan-centric LEGO Ideas theme has now found its way into the hands of some builders already as early impressions for 21328 Seinfeld have arrived to guide us through the references, minifigures and builds that you’ll be able to find.

Brian Saviano from Beyond the Brick is one of the few LEGO YouTubers who has been sent the model ahead of release by the LEGO Group and is offering us a tour of Jerry Seinfeld’s iconic apartment, recreated in bricks.

For many fans of the show, the main draw for the LEGO Ideas set will be the number of references included and the quantity of them. Easter eggs are a feature that the LEGO Designers have undoubtedly become familiar with after 10292 The Friends Apartments and as proven in the review, 21328 Seinfeld is no slacker in that department either.

We won’t spoil the wealth of callbacks and allusions for you here but it seems difficult to look at even a single corner of the build without spotting something from one of the show’s 180 episodes.

Notably, the YouTuber’s minifigure for the titular character has an unfortunately messy face print and we’ll have to see if this becomes more of a common issue amongst numerous copies of the set, or if it’s just a minor production error. Every other minifigure includes at least one reference to the series too, adding to the growing list of Easter eggs.

“Between the stickers, the minifigures and the amount of the pieces you get in this set, if you are a Seinfeld fan you’re gonna love this and recognise a lot of the details from the show,” comments Brian. “Even if you haven’t seen the show I think you get a good idea for some micro builds you can do with the cabinets and the stove and microwave.”

We’ve got plenty more on 21328 Seinfeld to tide you over until launch from the official announcement to a comparison with the original fan model. The latest LEGO Ideas set will be available on July 21 for VIPs and August 1 for everyone else for £69.99 / $79.99 / €79.99.