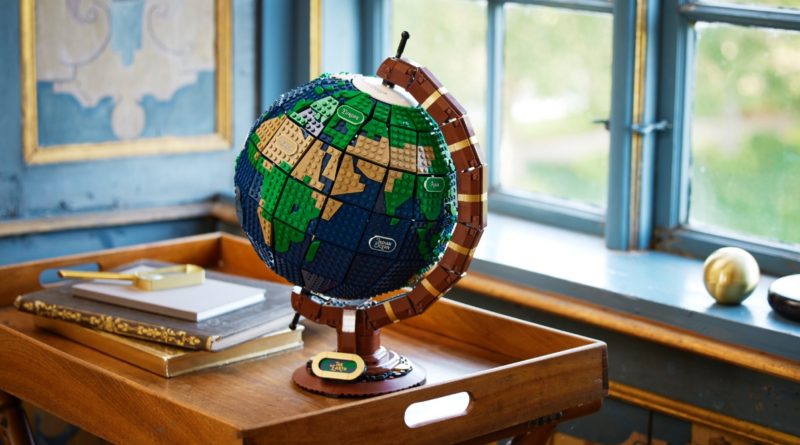 The LEGO Group has officially unveiled 21332 The Globe, a brand new LEGO Ideas set based on a concept by fan designer Guillaume Roussel.

Originally titled ‘Earth Globe’, Roussel’s submission got the green light from the LEGO Group all the way back in September 2020, as part of the first 2020 review. It’s now finally about to land on shelves, and the finished product looks remarkably similar to Roussel’s initial design.

The relative dimensions of the globe and its construction match the original concept; the tiles with the names of the continents and oceans are still present and correct; and the stand retains Roussel’s proposed brown and gold colour scheme. There is one pretty stark difference, though: 21332 The Globe contains 2,585 pieces, a full 525 more than Roussel’s model.

Given the external similarities between both globes, that discrepancy points to an overhauled internal framework – and that’s exactly where the LEGO Group has focused most of its changes. Find out more in our detailed review of 21332 The Globe, which is already online here.

“When approaching the design, I asked myself: ‘What could be creative, educational and touch most of the world?’” Guillaume said. “The answer was just ‘the world itself’.”

All the tiles in 21332 The Globe are printed, and those on the sphere itself also glow in the dark (just in case you fancy a bit of after-hours cartography). The terrain also takes a slight departure from Roussel’s vision, using a mix of green and dark tan (instead of just green), but mostly reflects a similar layout – understandably, given both models are working from the same source material.

“What is so wonderful about this set is that, with a little imagination, it allows fans to discover the world through LEGO bricks,” said the LEGO Group’s Head of Global Marketing for Adults Federico Begher.

“The globe is a symbol of dreams and aspirations of travel to come for all who are seeking a bit of adventure, or for those looking to learn about our world. When reviewing Guilaume’s set we could see the passion he had for travel and adventure, but also for inspiring building fans everywhere. Our designers also relished the challenge of making this set spin.”

Support the work that Brick Fanatics does by purchasing your LEGO Ideas sets using any one of our affiliate links.