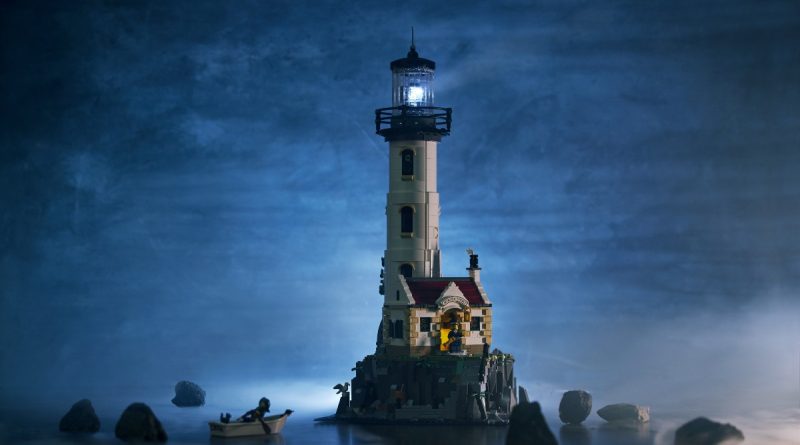 LEGO Ideas 21335 Motorised Lighthouse eschews the original project’s scale in favour of one closer to minifigures, and for a good reason.

Part of the development process caused a major departure from the original submission’s design opting for a minifigure-scale building rather than a microscale one. The reason for that was to make it better suited for your displays.

“Quite early on that we had a lot of discussions about the scale especially with Sandro, because we wanted to make sure that everyone was happy with the decisions that we made,” explained Samuel to Jay’s Brick Blog. “We knew that this would be a great addition to the landscapes and cityscapes that our fans were creating at home, so just adding this to your collection in minifigure-scale, we just knew it would be really great.

“We also felt it would be a great follow up to some of the past sets that we’ve had from LEGO Ideas such as the Old Fishing Store and to continue that kind of aesthetic. We could also include a couple of new exclusive characters as well.”

In terms of those exclusive minifigures, the designers confirmed that neither of them is intended as a reference to any movie, though there is one Easter egg in their design.

“They’re quite generic, and didn’t reference the movie (The Lighthouse) – I’ve never seen the movie, and from the trailers, I felt it was too dark and would influence me in a bad way,” commented Luka. “I think the lighthouse keeper in Dark Blue references the Danish uniform for lighthouse keepers in the 19th century. If I’m not mistaken, they’re completely dark blue with a bit of gold.

“The dark green outfits were my proposal to complement the whole colour scheme. If you look at it, it’s about the patches of colours that are distributed. You have a bit of dark green on the foliage and the windows, and what fits in that colour scheme was that dark green kind of rain suit.”

The period of 21335 Motorised Lighthouse was also an important aspect for the design team to keep in mind when developing the new LEGO Ideas set, playing a huge part in the minifigure wardrobe.

“It’s also a very appropriate 19th century kind of colour for the wardrobe,” continued Luka. “Claus (the graphic designer) did a lot of exploration on how people were dressing, and we really wanted to place this in the 1850s, which at the time, lighthouses were state of the art technology and engineering.”

Continued the LEGO Group’s recent efforts towards diversity in their portfolio, the designers also ensured that the minifigure elements would be versatile between characters too.

“We also wanted the torsos to be reusable as well,” said Samuel. “We didn’t want them to be too feminine or too masculine, so you have the opportunity to maybe switch their roles over.

LEGO Ideas 21335 Motorised Lighthouse is available now on the official online store as the latest model in the theme. It won’t hold that title for long though as 21336 The Office is only a couple of weeks away at the time of writing.