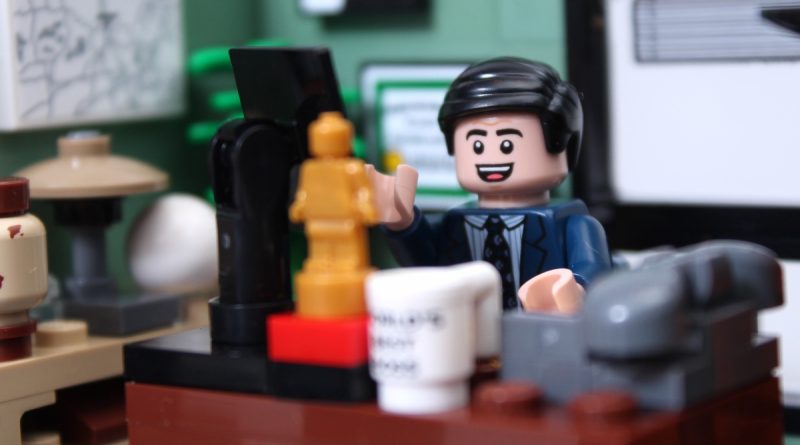 LEGO Ideas 21336 The Office digs into the details of its source material to bring to life a deliberately dull backdrop – because, let’s face it, you’re still building an office.

Have you ever looked up from your cubicle and thought, ‘Wouldn’t this lifeless, grey shrine to capitalism, devoid of personality as it is, look brilliant in LEGO bricks?’ We’re guessing not, and with good reason: anyone who’s ever spent more than 10 minutes in an office scenario doesn’t want to take that home with them. But it was that stuffy, monotonous setting that proved the perfect backdrop for The Office, which – across nine seasons – charted the highs and lows of the people who inhabited its walls, and the stories of their mostly mundane lives.

21336 The Office – based on a design by Jaijai Lewis, who achieved LEGO Ideas success at the third time of asking – channels the spirit of the US sitcom by offering a relatively bland backdrop for a wealth of characters, story moments from and references to the show that inspired it. But is that enough to make building desks, computers, phones and, erm, a conference room a tempting way to spend 90 minutes of your precious free time outside your own office?

LEGO Ideas 21336 The Office is available to buy from LEGO.com and LEGO Stores. Following a short period of exclusivity, it’s likely that it will show up at other retailers – such as Zavvi or John Lewis – and may be available at a discounted price. (It’s already very good value for its retail price, though.)

21336 The Office smartly starts with Michael’s office, a compartmentalised build that can slide away from the rest of the set for individual display. It’s a shrewd decision because it’s perhaps the most detail-packed section of the entire model – the references come thick and fast, calling to mind particular scenes and stories from the show – and instantly pulls you away from the thought that you’re just building your own (or somebody else’s) workplace.

When that moment does come, as you piece together the basic base of plates and begin stacking bricks for the plain walls (to be decorated with stickered tiles), you’re already looking forward to what that next reference or detail might be, and mostly forget that you’re assembling a corporate environment.

And even with that in mind, the most interesting moments in the build genuinely do come in the mundane decorations that litter the empty floor space: a coat rack here, a desk there (and there, and there – six times over, in fact). The photocopier is a particular highlight – a sentence we never thought we’d write – twisting its tiny grey pieces to cleverly push its studs in all directions.

There’s a lot of repetition across these sub-assemblies, but (thematically speaking) it all feeds into that bigger picture of building an office. The real trick is spreading the minifigures out liberally across the build, and there are so many (we’ll come to that soon) that you’ll find new characters to put together every time you split open a new bag. These are really what bring the set to life, so they’re crucial to the rhythm of the build.

So too are the references packed in – more than 100 in total – which constantly conjure up memories of your favourite scenes: Michael giving away golden tickets, Dwight and Michael’s ‘The Electric City’ rap video, and the stapler encased in jelly. They’re mostly achieved using stickers (with a few exceptions, such as the brick-built Homer Simpson plush), but none are especially frustrating to align – even the window shutters go on with relative ease. It’s really the sheer quantity that grates here, especially where some are plentiful enough that a print feels like it would have been a fair request (the six phones, for instance).

Even with those stickers slowing things down, though, it’s a pacey build – so even across 1,164 pieces you never really have time to dwell on the repetition that does arise. Instead, you’ll be too busy lost in spotting all those very many references. Check out each and every one in the video below.

Any sitcom set will live and die on its minifigure line-up, because it’s those characters that are the real driving force of any TV show. We don’t really care about Dunder Mifflin: it’s merely the backdrop against which we see Jim and Pam’s romance blossom; Ryan’s rise and fall in the world of big business; Dwight’s attempts to ensure everyone is well-versed in fire safety; and Michael trying to convince his staff to join a pyramid scheme.

None of those moments could be brought to life in 21336 The Office without including each and every one of the characters integral to the show, so they were all necessary here – even if half of them don’t have desks. If anything, we’d have liked to have seen 21336 The Office given a slightly higher budget to incorporate at least the accountancy department (if not the annex), so as to better accommodate its vast quantity of minifigures.

Even with 15 characters in the box, there were always going to be some major omissions (Andy and Erin spring to mind – Andy’s angry outburst against the plasterboard of Dunder Mifflin is represented, but he’s not). But we wouldn’t have swapped them for any of the minifigures here, which all draw from the show’s first season, and are pretty much a swing and a hit for the LEGO Ideas team.

Tiny incongruencies emerge, like the colour of Pam’s hair, but on the whole these are pitch-perfect representations of the characters they’re intended to portray. How do we know? You don’t need the box to tell you who each one is. That’s a mark of success if ever there was one…

In this newfound age of LEGO price increases, regular £500+ sets and models that often skimp on minifigures, 21336 The Office feels like a breath of fresh air. It’s accessible for casual fans (although could arguably have benefited from an extra £30 in budget to build the accountancy department), but doesn’t hold back on references, minifigures or attention to detail.

It stacks up well next to previous sitcom sets, too: 10292 The Friends Apartments is £55 more expensive in the UK for half as many minifigures (albeit with nearly twice as many pieces), while 21336 The Office is only 50% more expensive than 21328 Seinfeld for far more minifigures and a similarly-sized build. You won’t have too many qualms paying full price for this one.

Like the LEGO Group’s best sitcom sets, 21336 The Office leans into the details and characters that helped make its source material so successful. Barely a section of the instruction book goes by that doesn’t bring to mind another classic moment from the show, from Meredith being bitten by a bat to Michael’s screening of Threat Level Midnight. Anyone who’s ever spent more time than is probably healthy binge-watching The Office – and the stats suggest there are plenty of us – will be continuously and consistently delighted by possibly the best LEGO sitcom set yet.

Because yes, you’re building an office, but it’s not just any office – it’s The Office.

Got a LEGO TV show itch to scratch, but you’ve never watched The Office? Well, get yourself over to Netflix and rectify that as soon as possible, and in the meantime consider any one of 21319 Central Perk, 10292 The Friends Apartments or 21328 Seinfeld for a taste of what to expect. If you’re not familiar with Friends or Seinfeld either, you might just need to watch more TV.

How long does it take to build LEGO Ideas 21336 The Office?

21336 The Office flies together pretty quickly, with its 10 bags taking around 90 minutes to construct tops. That’s enough time to watch your favourite four episodes of The Office.

How many pieces are in LEGO Ideas 21336 The Office?

LEGO Ideas 21336 The Office contains 1,164 pieces, with a total 15 minifigures representing every main character from the show’s first season.

How much does LEGO Ideas 21336 The Office cost?