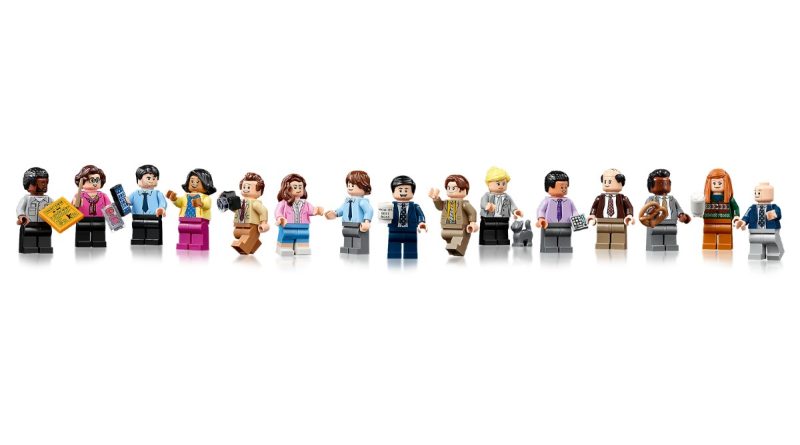 LEGO Ideas 21336 The Office has 15 minifigures of the show’s cast, and these miniature plastic versions look just like the sitcom’s characters.

Featuring 15 exclusive minifigures, or 16 counting Garbage, 21336 The Office is the latest LEGO Ideas including an all-new variety of minifigure accessories to depict the cast as accurately as possible.

To appreciate the finer details of these minifigures, let’s look at each of them compared to their sitcom equivalent, though there are a couple missing.

Michael Scott is present with his World’s Best Boss mug, ready to run Dunder Mufflin or return for a touching reunion.

Dwight’s signature parted hair and sideburns are represented in his minifigure in his classic brown suit. It’s unmistakably a Dwight minifigure no matter how you look at it.

With a slight smirk, Jim’s minifigure wears a simple blue shirt with nothing else of note other than the various accessories referencing different series.

Running the reception desk, Pam is depicted in her pink jacket and shirt with a clear view of Jim’s desk from reception.

Ryan uses the same shirt piece as Jim in his minifigure but with what appears to be a two-faced head piece depicting a clean-shaven face and one with facial hair.

Angela’s outfit in the minifigure features an adorable pin of a cat, one that fans of The Office will recognise and that those unfamiliar the sitcom can use for vets or pet owners in their collection.

Oscar is another comparatively simple minifigure compared to other minifigures in 21336 The Office but still his closely matches the character in the show.

Stanley also has a minifigure in 21336 The Office with accessories including a crossword puzzle and a pretzel.

Kelly’s minifigure is one of the cheeriest in the set, wearing a fashionable and colourful outfit, contrasting many other minifigure in 21336 The Office.

Phyllis’ minifigure wears a pink shirt with a pin and a scarf, featuring a smaller smile on her face, suiting her quiet nature.

Meredith’s minifigure is another simple, but effective depiction of the character from the series, complete with a patterned sweater.

Creed’s minifigure is the only one in the set to not have a hair piece, contrasting one of his most iconic quotes from the show – “Bald people make me sick.”

Toby’s expression is captured well on his minifigure, making him standout next to the other 15 in 21336 The Office.

Rounding out the other minifigures is Darryl, featuring a nametag on his shirt and a cheery expression.

Of course, we can’t forget Garbage who is also included in the set using one of the new kitten elements.