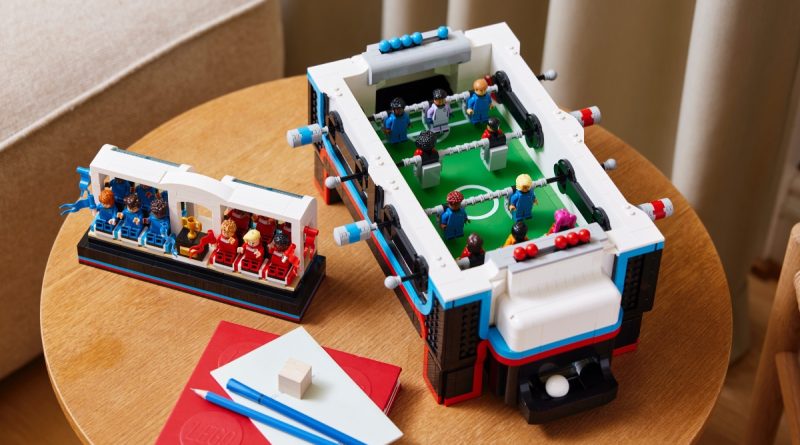 The LEGO Group has revealed the next LEGO Ideas set, 21337 Table Football, based on a design by 16-year-old Hungarian LEGO fan Donát Fehérvári.

Originally announced at LEGO CON in 2021, 21337 Table Football boils the classic tabletop game down into a 2,339-piece model, measuring over 41cm tall, 29cm wide and 15cm deep. It’s a condensed version of the original submission, scaling back Fehérvári’s 11-a-side pitch to five-a-side teams of LEGO minifigures. But there are still 22 minifigures in the box, complete with all manner of customisation options.

Not for their kits – you’ve got a choice between nondescript red or blue strips – but for their heads and hair, across which you’ll find plenty of diversity. The minifigures who can’t fit on the pitch instead sit in a separate stand, emulating a real-life football stadium more than a real-life table football game. The set is apparently still packed with enough functionality to replicate the real game, however.

“What makes the LEGO Ideas Table Football set so amazing is that it harnesses the spirit of sport,” said LEGO designer Antica Bracanov. “Donát’s design champions the shared rollercoaster of emotions that fans experience when watching football games. At the LEGO Group, we are incredibly proud to have brought this set to life, allowing fans to swap football boots for bricks, and be inspired to take part in the game of play, for the love of play.”

The LEGO Group is touting 21337 Table Football’s size as ‘perfect for transporting to play with friends’ and, mysteriously, ‘an ideal display cabinet piece’ (which feels like an odd thing to say about a model geared first and foremost around play). You’ll be able to get your hands on it from November 1 for £214.99 / $249.99 / €249.99.

If you’re in France on October 29 to 30, you’ll also be able to compete in ‘the ultimate LEGO Table Football competition’, which will feature a guest appearance from footballing legend Thierry Henry. The event will take place at 35–37 Rue des Francs-Bourgeois in Paris, kicking off a new ‘LEGO for the Joy of Play’ marketing campaign.