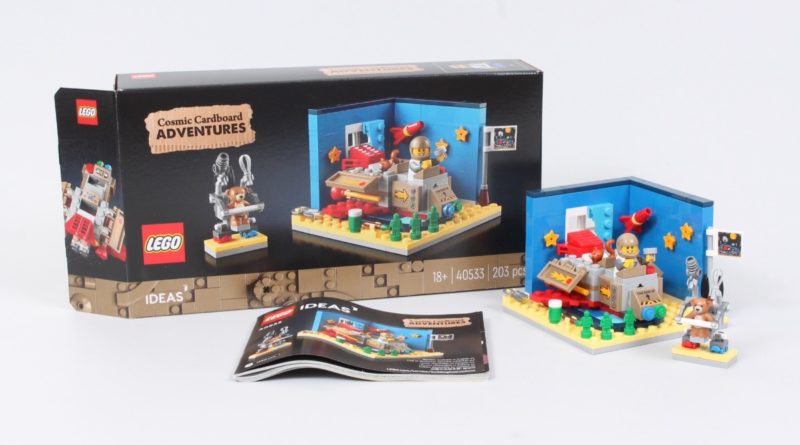 40533 Cosmic Cardboard Adventures is a LEGO Ideas gift-with-purchase that brilliantly demonstrates the benefits of turning to the fan community.

You may recognise Ivan’s name from 21324 123 Sesame Street, as he was also responsible for taking that LEGO Ideas set to 10,000 votes on the crowdsourcing platform. He’s one of Ideas’ most prolific users, having joined the 10K club on multiple occasions, and his latest successful design comes off the back of last year’s contest to find a future gift-with-purchase.

The Adventures of the USS Cardboard swept the fan poll by more than 700 votes in March 2021, and has now materialised as 40533 Cosmic Cardboard Adventures.

The best LEGO Ideas sets channel the spirit of their original submissions while improving on them in subtle ways, using elements and graphics only available to the LEGO design team. 40533 Cosmic Cardboard Adventures certainly fits that brief, expanding the scope of the playful build while reworking other areas to make them more relevant to the set’s target audience.

That means the finished model is far more substantial than Ivan’s initial concept – at least in the bedroom vignette backdrop, which balloons to 12×12 studs and two plates thick at the base – while retaining most of the neat visual touches, from the rocket and (unfortunately not glow-in-the-dark) stars decorating the bedroom walls to the army men littering the floor.

The cardboard rocket itself is almost piece-for-piece identical to Ivan’s design, too, and that’s certainly no bad thing, because it was already a wonderfully-realised model of a spaceship that genuinely looks like it’s constructed from old boxes and packing tape.

Some of the restrictions of the colour palette diminish the effect slightly – there’s too much grey – while the stickers are maybe not as kitsch as Ivan’s (the brown LEGO logo adorned to shipping boxes would have been a neat addition), but the fan designer will likely have little to complain about. Likewise for the flag, which replaces the cute pizza box concept with a recreation of a Classic Space set, suggesting little Timmy here has torn up his dad’s prized possession. Good for him.

Also included in 40533 Cosmic Cardboard Adventures are a cat and teddy bear, both as per the original submission, though the bear has been upgraded with a mech (presumably to compensate for losing the cardboard clockwork robot) that’s just as inventive in its design as the rest of the set, incorporating roller skates, umbrellas and a whisk.

That standalone mech, fixed on a cool yellow base but also able to stand free of it, effectively sums up what makes 40533 Cosmic Cardboard Adventures such a winning GWP: would we ever have gotten anything as pure, imaginative and so packed with interesting elements from a regular freebie? Between this and 40487 Sailboat Adventure, here’s hoping the LEGO Group turns to the Ideas community for its gifts-with-purchase more regularly.