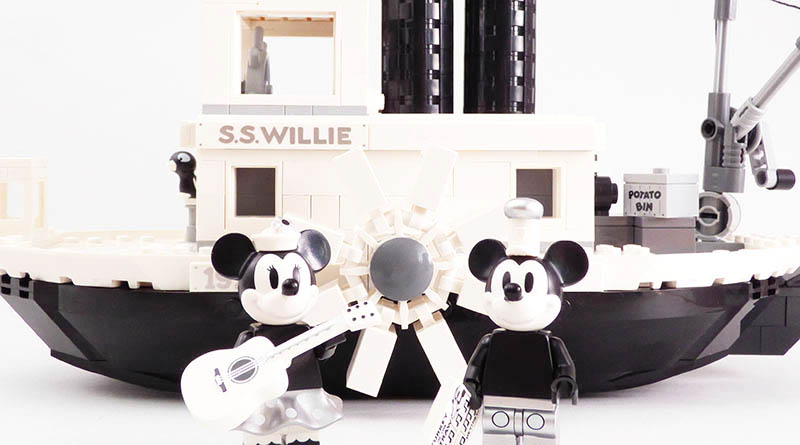 The world’s most famous mouse sailed onto screens for the first time in 1928. Now, LEGO Ideas celebrates Mickey Mouse’s heritage in 21317 Steamboat Willie

In 1928, a piece of animation changed the course of cinema history. Walt Disney was able to make the first cartoon with synchronised sound, at the same time introducing audiences to Mickey Mouse and Minnie Mouse. No matter how grand his dreams were, it is unlikely he could have predicted just where this short film would lead.

To celebrate the classic piece of animation, Steamboat Willie, Máté “szabomate90” Szabó submitted a product idea to the LEGO Ideas platform. The LEGO Group has collaborated with Disney to turn his concept into a set that celebrates 90 years of Mickey Mouse.

While LEGO boxes are not often worth of comment, this one is. It signifies the set has something a little special, with foil accents presenting 21317 Steamboat Willie in just the right way. It is the first ever product to use a scan of an original film cell from the 1928 animation on the packaging, and looks fantastic for it.

Building the set is an absolute joy, and a strange experience to begin with. The first batch of bags uses a mix of bright bricks in typical LEGO colours. The entire interior is made up of reds, blues, yellows and greens, making putting it together a breeze. A simple mechanism is incorporated into the main section.

Once the centre is complete, the black, white and grey bricks come out to complete the monochromatic model, covering up all of the coloured bricks within. SNOT technique goes every which way as the build develops, resulting in the absolutely beautiful looking steamboat.

As a model, setting aside the source material, 21317 Steamboat Willie looks visually striking by only using black and white with a hint of grey. It looks completely shelf worthy, one of those LEGO sets that goes beyond what a brick geek would consider visually arresting and will impress those outside of the hobby.

Taking the subject matter into account, this set is a masterclass in capturing the essence of what makes the source material special while at the same time providing a beautiful, enjoyable model. The basic shape of the vessel has remained, but the rudimentary sketch that featured in the original short has been re-imagined as something that works as a LEGO model. For example, the paddle wheels and flag are shaped differently to how they were in the original animation – but they work perfectly for the model and retain the spirit of the design.

One of the most wonderful things about the finished model is that thanks to the internal mechanism and subtle wheels tucked underneath, the smokestacks go up and down as the vessel is pushed along, replicating what happened in the cartoon. The paddlewheels also turn around, giving the build a real sense of life.

While few fans remember the plot of Steamboat Willie – the iconic part is Mickey whistling away at the wheel of the boat – the LEGO designers have still taken the time to incorporate key references to the animation. The parrot is included, although as a re-coloured Friends animal looks much cuter than the cartoon character. Other nice touches include the potato bin, sheet music, guitar, crane, bell and pans. Several printed pieces are included, all of which fans will appreciate.

The minifigures included with 21317 Steamboat Willie are absolutely exquisite in their design. Black, white and silver colouring puts them in perfect sync with the build and also gives them a real sense of luxury. Both use the same moulds as they did in 71040 Disney Castle and 71012 Disney. Unusually for a LEGO Ideas set, which cannot usually include new elements, each character has a new hat, both of which are specifically based on the short.

If the LEGO Disney theme was aimed at AFOLs, this is what it would be. It is hard to imagine what more a Disney fan could want from a set based on Steamboat Willie, with the designers having taken the unorthodox step of making a model bigger than the original fan design. This set is a serious contender for the best of the year – high praise in a year that has started with The LEGO Movie 2 theme already firing on all cylinders. 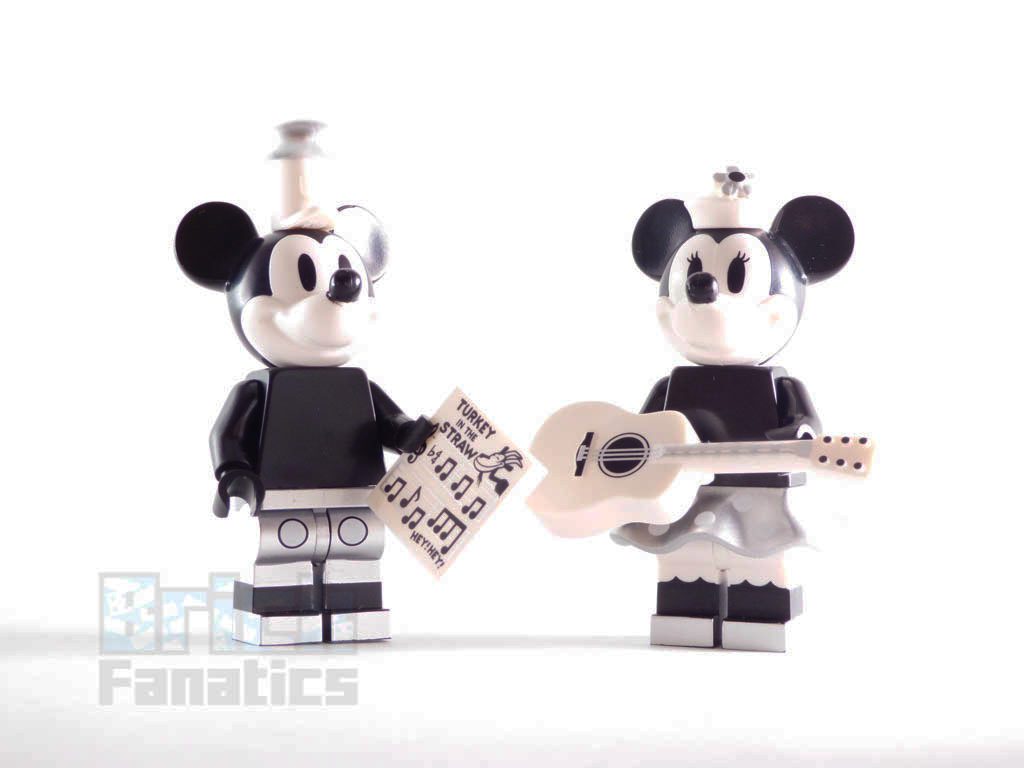