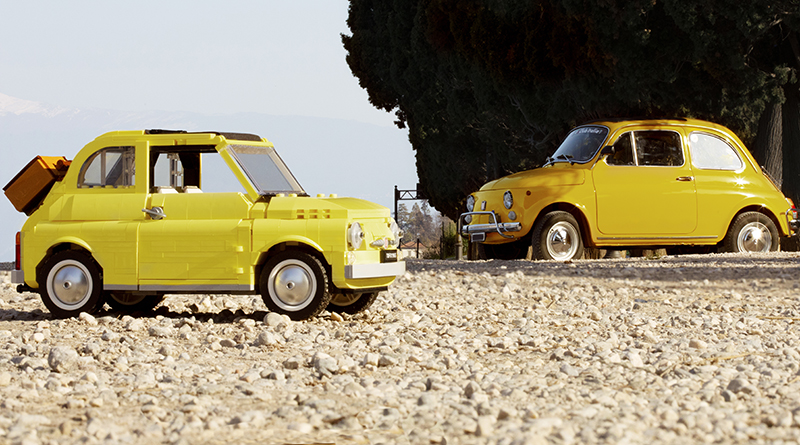 Felix Stiessen and Gabriele Zannotti submitted a Fiat 500 to LEGO Ideas, achieved 10,000 votes but did not have the model selected by the review panel. When images of the newly announced LEGO Creator Expert 10271 Fiat 500 emerged, there were concerns from fans that their idea had been the inspiration for the new set.

In response to the discussion, the LEGO Group has provided comment. Here is an extract:

LEGO Ideas has historically been a very open platform that allows members to submit proposals for new LEGO Ideas sets across a wide range of licensed and non-licensed sets. Over the years we’ve learnt more about what we can and can’t do, including ways of avoiding potential overlaps with LEGO sets we’re developing internally. For this reason, we’ve also implemented certain guidelines to prevent submissions based on licensed models that the LEGO Group publicly has in production, since we already have talented design teams working on future models. However, these guidelines can’t cover all potential overlaps that could come about, especially since we also try to give our members a certain degree of freedom to submit builds on as broad an array of third-party licenses or original ideas as possible, even when those original ideas are inspired by existing LEGO themes and the scale/expression within which they are based. We do this because we believe that there’s a sliver of a chance of something that fits into an existing theme that might just wow us that much and differentiate itself enough, such as the Caterham Seven 620R that was turned into an official LEGO Ideas set a few years ago, despite it thematically sitting within the realm of what the Creator Expert team would do.

As the LEGO Group’s partnerships with new license holders continues to evolve, we run into unintentional overlaps between our own confidential product development pipeline, including the evolution of existing themes, and the creative models that LEGO fans build and submit to LEGO Ideas.

In the particular case of the Fiat 500, the LEGO Creator Expert team has continued its longstanding history of producing LEGO cars in this scale, expression and price range that celebrate some of the most iconic and classic vehicles that have graced the roads – from the Mini Cooper to the Ford Mustang, the VW Beetle to the Ferrari F40.

It’s important for us to reiterate that when basing ones designs on existing intellectual properties (vehicles, buildings, movies, etc.) or other objects in existence in the real world, the likelihood of someone else around the world, including in this case a LEGO Designer/Design team, having thought of a similar idea has the potential to exist. Such is the nature of a creative medium such as the LEGO building system and such is this instance, where the LEGO Creator Expert team has developed the set independently.

As has been the case on previous occasions, the LEGO Group has been developing a set in secret at the same time that fans have been drumming up support on the LEGO Ideas platform. It seems that this will continue to be one of the risks for fans submitting their ideas to the website.