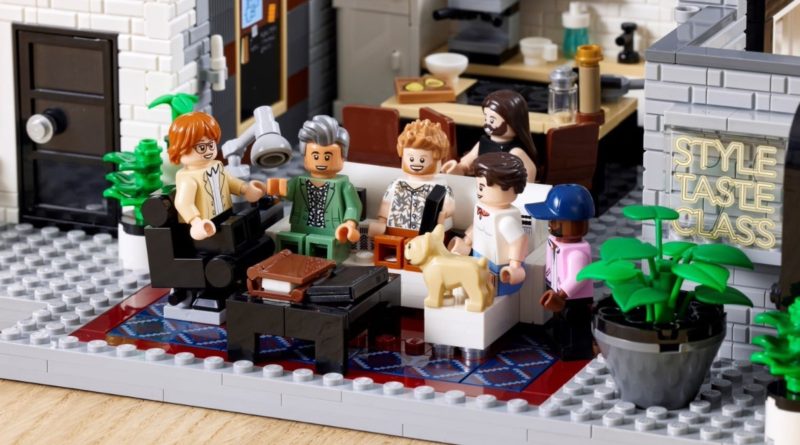 The LEGO Group is facing a lawsuit over one of the minifigures in last year’s LEGO for Adults 10291 Queer Eye – The Fab 5 Loft.

The 974-piece set includes a hanging rail with spare minifigure torsos, among which is a leather jacket worn by Fab Five member Antony Porowski. It’s seemingly based on a design by artist James Concannon, who’s now suing the LEGO Group for copyright infringement for using his work without permission.

Several of Concannon’s shirts have appeared in Queer Eye since 2017, with each and every one cleared for use by the show’s production team. That relationship led to Concannon and Porowski becoming friends, and in 2018 the artist gifted the Queer Eye star a custom leather jacket. Porowski then wore the jacket – which is registered with the US Copyright Office – in the first episode of Season 4, which debuted on Netflix in July 2019.

However, Netflix apparently didn’t contact Concannon to ask for permission to use the jacket on the show, as it had done for his previous works. At the time, Concannon assumed it was an oversight and didn’t pursue any further – until the LEGO Group seemingly decided to use the jacket as the basis for a minifigure torso in 10291 Queer Eye – The Fab 5 Loft.

The lawsuit asserts that Concannon had not granted Netflix a licence to use the jacket, and by extension had not allowed it to be sub-licensed to third-party companies (such as the LEGO Group). It also claims that the LEGO Group didn’t ask Concannon for permission to use the jacket, didn’t compensate him and didn’t credit him as its original creator.

While the instructions for the set direct fans to use an alternate torso for Porowski, the jacket has been explicitly referred to and highlighted in marketing materials – including the set’s designer video – and the minifigure is also wearing it on the box art.

When Concannon discovered that the LEGO Group had used his design, he reached out to the company’s customer service department, which apparently offered to send him a free copy of the set for his six-year-old son. The set never arrived, however – and when he followed up, he was reportedly told that ‘the operator had made a mistake’, because the LEGO Group ‘does not give away its sets for free’.

The artist then issued a cease-and-desist letter, demanding that the LEGO Group ‘take seriously his intellectual property rights as a working artist’. According to the lawsuit, Concannon hoped that the company ‘had made an honest mistake’, not realising that he still retained copyrights for the jacket, and ‘would offer to compensate Concannon or pay him a reasonable royalty’, noting his type 1 diabetes and reliance on an insulin pump.

Instead, the LEGO Group’s lawyers allegedly told Concannon’s attorney that he was facing an ‘uphill battle’, arguing that he’d granted Netflix an ‘implied licence’ to use the jacket by gifting it to Porowski, knowing he’d wear it on the show. The lawsuit also claims that the LEGO Group suggested Concannon had only filed the cease-and-desist because he hadn’t received a free copy of the set as promised.

Concannon is now seeking damages through the lawsuit, claiming he’s suffered (and will continue to suffer) monetary loss to his business and reputation as a result of the LEGO Group’s alleged copyright infringement. He’s also suing for a share of the profits from the set, with final amounts to be determined at trial.

The outcome of the case will effectively hinge on whether the LEGO Group’s version of the jacket – which swaps the ‘thyme is on my side’ lettering on the back for ‘rebuild the world’, in a nod to the company’s marketing campaign – is seen as close enough to the original to infringe Concannon’s copyright.

“There’s a viable claim there, I think,” lawyer Mike Dunford wrote on Twitter. “But I don’t think it’s enormously strong. Many elements are omitted. Others are replaced. Still others modified. I don’t think any was exactly duplicated. The result evokes the look and feel of the original, but it’s different in every single detail.”

Dunford also states his initial impression is that ‘the complaint is intended for leverage to get a settlement’, so it may not even make it to trial, but notes that the suit also mentions Concannon’s supporters ‘encouraged him to sue’, potentially pointing to the influence of ‘social media-driven outrage’.

Netflix is not mentioned as a defendant in the suit, although the LEGO Group’s licence for producing 10291 Queer Eye – The Fab 5 Loft is with the streaming platform. That may ultimately leave Netflix liable for allowing the toy company to use the jacket without obtaining a licence for the jacket from Concannon, which Dunford suggests may have had ‘some influence’ on how the LEGO Group has reportedly handled the case so far.

Whatever the outcome, it seems very unlikely that 10291 Queer Eye – The Fab 5 Loft will be affected. You’ll probably still want to grab the set relatively soon if it’s on your wish list, though, because the LEGO Group has recently bumped up its retirement from 2023 to the end of this year.