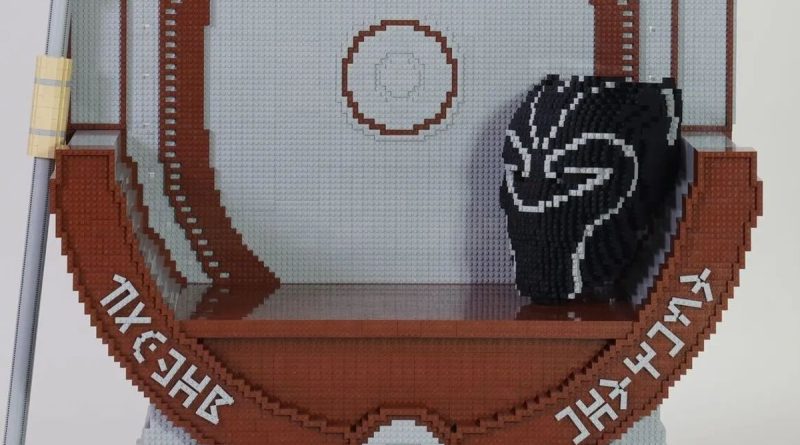 The LEGO Group’s Italian branch has revealed a collection of Black Panther props to rival LEGO Marvel 76215 Black Panther, including a helmet.

Over on Instagram, The LEGO Group Italy has showcased a giant model that will be featured at the Lucca Comics & Games convention from October 28. Based on the nature of this Black Panther build, it’s likely intended to promote the release of the Wakanda Forever sequel on November 11, 2022. However, it also has a similar element to an official set available now.

76215 Black Panther is huge, but not quite as big as this giant throne, spear and Black Panther helmet. Despite the size difference the helmets are a similar scale and offer a comparison of the different ways an official version could have been approached. The helmet in 76215 Black Panther uses a complex combination of techniques to accurately depict the hero’s iconic visage with few studs showing.

However, the build for the convention instead opts for a simple build with plates and tiles to capture the shape of the helmet and the lines that run through the design.

Though the two are very different, each one has its advantages and disadvantages as the latter version was likely more time-consuming to put together and may not be as stable as the helmet in 76215 Black Panther.

You’ll be able to see the big build from October 28 to November 1 at the Lucca Comics & Games convention’s Disney stand in Piazza San Michele. The prop recreations were put together by master builder Riccardo Zangelmi.