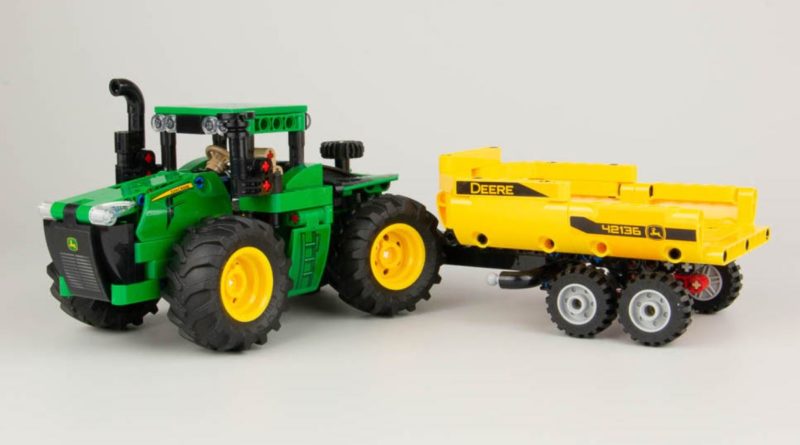 Grab your wellington boots: the LEGO Group has teamed up with John Deere for the first time, so we’re heading to the farm with 42136 John Deere 9620R 4WD Tractor.

Since 1977, when 851 Tractor rolled out of the factory, tractors have been a core part of the Technic line-up. Indeed, 851 was only the second Technic set ever released, so they really have been there since the start – and they’ve been a constant presence ever since. Well, almost. There was a 20-year gap between 8849 Tractor in 1986 and 8281 Mini Tractor in 2006, but apart from those… two decades, pretty much constant.

But all those sets, plus the dozens of non-Technic tractors that stretch back to set 316 in 1963, have been generic models. Now, however, we have the first licensed set of a real-world machine, with the release of 42136 John Deere 9620R 4WD Tractor.

Is it an ‘at-tractor-ive’ prospect? (Sorry not sorry.) Let’s take a look…

One of the many joys of the humble LEGO brick is that it’s self-explanatory. Give a pile of bricks to anyone, from five to 95, and they know instinctively what to do with it. Try it some time. Next time you have friends round, leave a handful of bricks in a bowl on the table and see how long it takes for someone to start playing around with them. Not long, we’ll wager, even for the people who look askance at those of us who are still ‘playing with toys at our age’.

Technic, on the other hand, needs a bit of introduction. Leave some of that on the table and people might look at it with interest, but it’s unlikely that there will be any functioning machines by the end of dinner. Indeed, give someone a handful of Technic beams and there’s almost nothing they can do with it unless they have some connecting pins, whereas pretty much any two System bricks can be joined together in a variety of ways.

So in order to progress to the headline-grabbing monster sets like 42141 McLaren Formula 1 Race Car or 42130 BMW M 1000 RR, there’s a bit of education involved, which is where this set fits in. It’s a step up from the simple, pullback motor-equipped sets like 42134 Monster Jam Megaladon or the entry-level 42132 Motorcycle. There are some gears involved, a few basic functions, and the construction techniques start to hint at what Technic is capable of.

We start with the tractor itself. The front of the chassis is built up, with the neat use of a Technic seat as the vehicle’s ‘nose’, and then the rear, which is independent. The two halves are connected with a series of gearwheels, which culminates in a 20-toothed gear that acts as the ‘Hand of God’ steering wheel at the tractor’s rear.

The bodywork is built up in the distinctive green colour, accentuated by a handful of easy-to-apply stickers that add detail such as manufacturers’ badges, rear lights, some roof detail and so on.

The interior of the cab is rudimentary – there’s the suggestion of a seat that, as we shall see, can’t actually seat a minifigure, and a steering wheel that, annoyingly, isn’t fixed in place and so has the habit of moving up and down if it’s touched. They’re minor niggles though in a set at this price. A set of suitably chunky wheels and tyres finish things off.

The tractor takes up three of the four bags provided. Moving on to bag four and a second instruction manual, we start building a bright yellow trailer. This comes together quickly, consisting mainly of flat and bowed panels with a handful of Technic beams.

The four wheels of the trailer have no suspension but do have some articulation for rough ground, which could be described as agricultural at best, but then it is for use on a farm! The trailer has a simple lift mechanism, which along with the tractor steering are the only functions in this set.

A few stickers finish off the trailer, leaving a robust set that will provide both hours of play and a good introduction to the joys of building with Technic.

There are no minifigures included in 42136 John Deere 9620R 4WD Tractor, although there’s just about enough space to squeeze one into the cab if you really must.

At £24.99 / $29.99 / €29.99 this is solid value for money. A decently-sized model with some fun, playable functions, and a good selection of parts makes this a great purchase for those interested in seeing what can be done with Technic.

At 390 pieces for the tractor and its trailer, 42136 John Deere 9620R 4WD Tractor is just about minifigure scale. When we finished the build, the driver from LEGO Speed Champions 76906 1970 Ferrari 512 M wandered over and wanted a drive. He could get in, but tended to slip off the seat (health and safety is absent here) and the roof had to be removed to provide access, so we’d find it hard to recommend this as a minifigure-friendly vehicle.

For a model with relatively few parts it does an excellent job of recreating its real-life counterpart, although looking at images of the real 9620R, it seems that many versions often have four (or sometimes even six) wheels on each axle, rather than the more conventional two, as we have here. However, with the acquisition of four more wheels and some longer axle pins, it would be a fairly simple modification…

Overall it’s a good intermediate step for those wishing to move away from the simplest Technic sets and see what else the medium has to offer. For anyone who has already built more complex machines it’s unlikely to hold much interest – there are no revolutionary building techniques or new parts here – so in that case it’s only likely to appeal to the Technic completist.

For newer Technic builders though – definitely one for the wish list.

You can help keep Brick Fanatics ploughing away by purchasing your LEGO sets via our affiliate links. Thanks!

Building 42136 John Deere 9620R 4WD Tractor will take about 90 minutes. There are two manuals and four bags to work through, and 17 simple-to-apply stickers.

There are 390 pieces in John Deere 9620R 4WD Tractor. While many of the plates end up having stickers applied, which makes them more difficult to use elsewhere, there are a good selection of parts, including eight useful wheels.