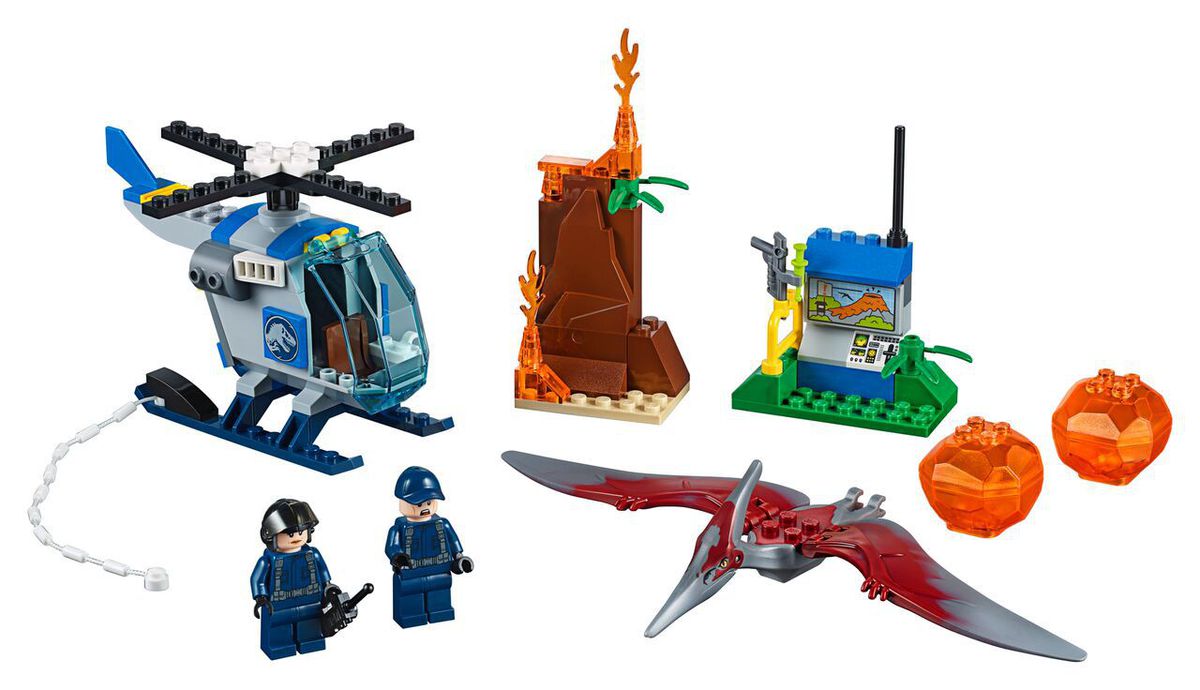 It is pretty clear from a casual glance at 10756 Pteranadon Escape that this Juniors set does not live up to a regular LEGO building experience – could this Jurassic World: Fallen Kingdom set have some redeeming qualities?

As well as the regular LEGO Jurassic World theme that launched today, there are three LEGO Juniors sets based on the newest film in the franchise. 10756 Pteranadon Escape is one of them, attempting to capture some of the movie’s drama with a helicopter, volcano and the titular flying dinosaur.

For many fans, the first time they have entertained a LEGO Juniors set will be by picking up one of those based on Jurassic World: Fallen Kingdom. There is rarely much of a reason to venture into this range that is proudly for ‘4+’, offering a less sophisticated build experience accessible to the younger end of the build spectrum.

The extent to which the construction aspect has been simplified is surprising when building 10756 Pteranadon Escape. No-one is going to crack open one of the bright red boxes and anticipate being wowed by the set that is contained within, but until someone has put such a set together it is hard to explain just how limiting the pieces are.

In this case, the helicopter is essentially one large, moulded piece that a few other elements are then snapped on to. It takes no time at all to turn the grey block into a crude helicopter, but the resulting aircraft looks like an inspirational model from the side of a LEGO brick bucket – only the brick bucket versions use more elements. While LEGO Juniors sets are designed to offer a simple build for a younger child, even the hypothetical child consumer is likely to want to do more building than this.

The supplementary builds – a volcano and a control panel – are no better, with the former being particularly unimpressive. A link between the two has been established, with the monitor on the latter showing the eruption of the former, so at least there is some synergy going on.

Despite the build not being anything that will appeal to hard core LEGO fans, the set is still one that will prove tempting. The Pteranodon has a lovely red and grey colour scheme, using the excellent mould that can also be found in 75926 Pteranodon Chase. As shown in some of the images, a few trans pieces from the collection will help to improve how the flying dinosaur looks on display.

The minifigures are neat, although not too exciting. Like the ACU minifigure in 10757 Raptor Rescue Truck, they fall into a category that a long time action figure columnist coined ‘just different enough to make you mad’. Essentially, they are something that you already own, but a collector will probably want anyway because of the slight variations from other releases.

Better than the minifigures though are the printed pieces, which are the high point of the LEGO Juniors line. Hating on stickers has become a standard part of a LEGO set review to the point of seeming like parody, so it is worth revisiting the main concern with them – in years to come, they will probably begin to peel or discolour, spoiling the look of the set. There is no risk of that with printed parts, and the Jurassic World logo – that is presented as a sticker in the regular line – is one of the lovely printed tiles found here.

So even though the build itself will barely occupy the time it takes to watch the trailer for Jurassic World: Fallen Kingdom, this set is still worth buying. The printed pieces should be added to the sets from the ‘proper’ theme or used in original builds to complement those sets. And that Pteranodon is pretty sweet, too.

LEGO Juniors 10756 Pteranadon Escape is available now at shop.LEGO.com. You can help support Brick Fanatics’ work by using our shop.LEGO.com.