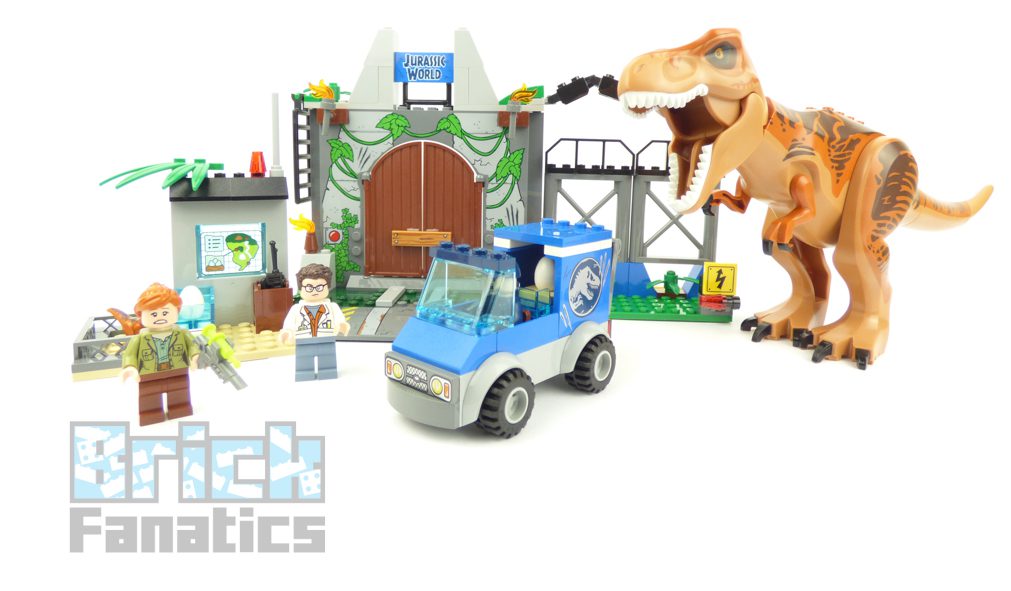 Two things about the Jurassic Park franchise that are unforgettable are the Tyrannosaurus Rex and the imposing gates – both are included in 10758 T-Rex Breakout, so will this LEGO Juniors set satisfy nostalgia nuts?

To supplement the regular Jurassic World theme, three LEGO Juniors sets have been released that are also inspired by Jurassic World: Fallen Kingdom. While usually this may be a theme that is easy to overlook, the exclusive dinosaurs will pique the curiosity of anyone with an interest in the movie. In the case of 10758 T-rex Breakout, it is the only regular retail set containing the best known of all of the prehistoric beasts – 75933 T-Rex Transport, in the main theme, is a store exclusive.

The box does not only contain the most prominent Indominous Rex defeating dinosaur of Jurassic World though, it also contains the famous gates, a truck, some fence and Bryce Dallas Howard’s Claire Dearing (whose name you are forgiven for forgetting) as a minifigure. 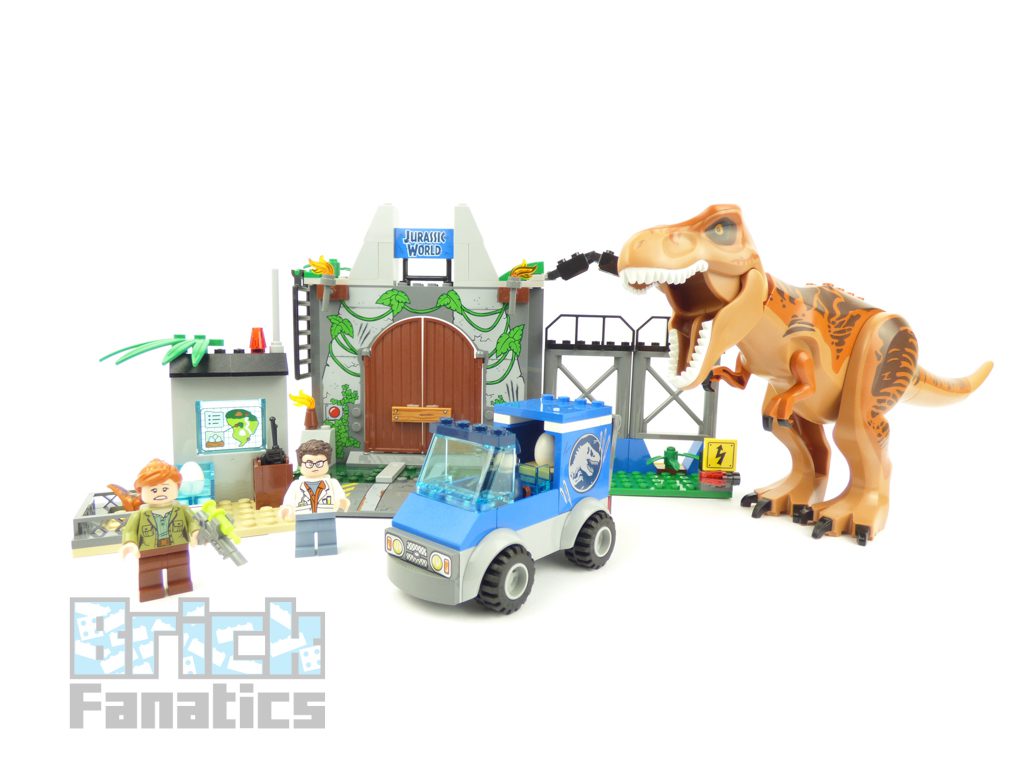 Building is a generous term for putting together LEGO Juniors 10758 T-Rex Breakout. The frame for the gates is one huge, moulded piece. As for the truck chassis, it is smaller, but still something that ought to be achieved by using four or five distinct parts. The fence is built from two large, black elements. While this set is targeted at the youngest end of the System building age spectrum, it almost feels designed to introduce them to the LEGO brand rather than the concept of a construction toy.

Perhaps this would all be a bit more forgivable if the big wall piece was then used to build an impressive model around, but it just has a few pieces wacked on top of it. Looking at the slopes at the top, the set looks completely unfinished. The torches are a nice touch and will be appreciated by Jurassic Park fans, but the placement is not accurate to either movie – although anyone looking for film accuracy in LEGO Juniors really is looking in the wrong place.

A nice touch that should not be overlooked is the meal used to feed the T-Rex. Including a goat would have made AFOLs happy, but perhaps been a bit too gruesome for children. Instead a hot dog has been placed behind the fence, so that the dinosaur can enjoy a fast food classic. It is nice to see a spot of classic LEGO humour incorporated here.

The flaws in the building of 10758 T-Rex Breakout – the big, moulded parts that are put together in no time – are also the strengths. Taking the frame for the gates as an example, it being a big moulded part allows it to also be completely printed. This could be a useful starting point for an original build – especially an abandoned temple of some kind. Other nice printed parts include a map of the island on a computer screen, a warning sign, a road piece and the circular logo. These will all be useful for Jurassic World builds and are more desirable than the stickered pieces in the regular theme.

One disappointment with the printed pieces, that is perhaps inevitable given the timing of the release, is the Jurassic World sign. It was cool seeing the updated gates in Jurassic World, but the iconic, memorable gates are the Jurassic Park originals. To have that logo on a printed tile would have made many nerds very happy, and the four year olds who this set is aimed at may well not have noticed, or cared.

The T-Rex in this set is the same mould that was introduced in 2012, which is a very good thing indeed. It is an excellent sculpt, the face is packed with character that is enhanced by the paint job. Colouring on the Rex is similar to that found on the version in 75918 T-Rex Tracker, but it is not the same. Posing the photogenic LEGO creature is great fun and likely to stir up anyone’s inner child.

As for the minifigures, they are all decent. The ACU fellow matches those found in other Juniors sets and Claire Dearing is the same as the version found in the LEGO Jurassic World theme. That leaves the scientist, who is unique in this theme and features a nice dual sided head. Beating all of them in terms of desirability is the baby dinosaur, an excellent little mould that fans will be keen to amass several of.

It is strange to recommend a set that offers so little in the way of building, but 10758 T-Rex Breakout does have a certain appeal. The T-Rex, the printed parts and the baby dinosaur all make this worth considering – the minifigures and other parts sweeten the deal. Those who buy this will want to build the set once, then dismantle it and put those durable printed pieces to better use. Well, that and make the T-Rex stomp around going “RAAAAAWR”.