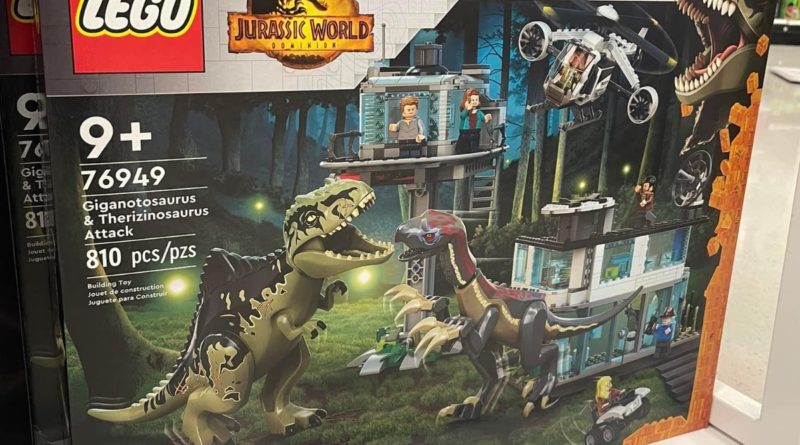 The latest wave of Jurassic World sets will arrive on shelves both real and virtual from April 17, with a total of nine new sets due to debut next month. They’re not the only LEGO Jurassic World products launching this year, however, as the previously-unrevealed 76949 Giganotosaurus & Therizinosaurus Attack has now surfaced at a brick-and-mortar Target store in Southwest Ohio.

Christopher Needham published an image of the 810-piece set to Paddock 9 Collecting, a Facebook group dedicated to Jurassic Park and Jurassic World merchandise. He didn’t try to buy the set, presuming Target would be unable to sell it ahead of its street date, but that it’s already on a shelf suggests it could well be arriving on April 17 alongside the rest of the new wave (as has been previously rumoured).

Alongside its two eponymous dinos – both of which are brand new to the LEGO Jurassic World range for 2022 – 76949 Giganotosaurus & Therizinosaurus Attack includes minifigures of Alan Grant, Ellie Sattler, Owen Grady, Claire Dearing, Kayla Watts and Dr. Henry Wu, all of whom are based on their appearance in the upcoming Jurassic World: Dominion.

While Ellie Sattler also appears in 76951 Pyroraptor & Dilophosaurus Transport, this is the only LEGO Jurassic World set to include an aged Alan Grant, as portrayed in the movie by Sam Neill – who reprises his role from the original Jurassic Park trilogy. That link to the original movies could prove reason enough to pick up 76949 Giganotosaurus & Therizinosaurus Attack for Jurassic fans, though the dinos will no doubt sweeten the deal.

According to the shelf label at Target, 76949 Giganotosaurus & Therizinosaurus Attack will retail for $129.99 in the US. Rumours suggest it’ll cost €129.99 in Europe, while we’re probably looking at an equivalent UK price of around £119.99. Given we’re only a few weeks away from the launch of the Jurassic World: Dominion wave, expect a full reveal very soon.