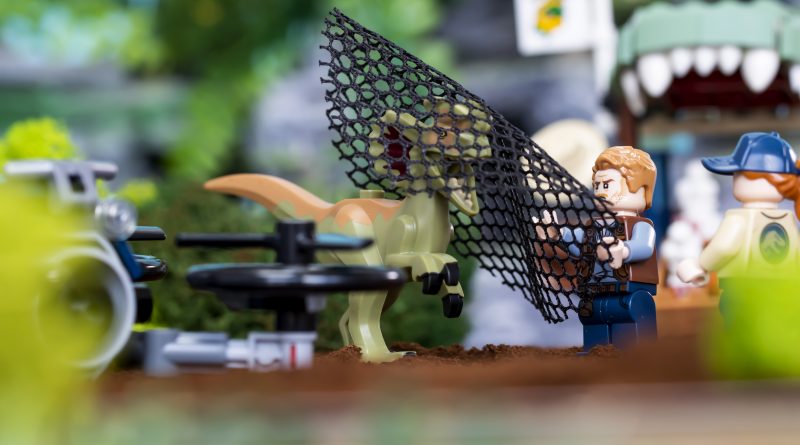 75934 Dilophosarus on the Loose is part of the LEGO Jurassic World theme, which is expanding to tell the story before the 2015 film. In these sets, the park is open and incidents are common but not catastrophic.

This set consists of two main builds. A drone large enough for Owen Grady to fly and a really neat little gift shop stall, shaped like a dinosaur’s mouth. Accessories include two fedoras, in brown and tan, two printed popcorn bricks and a collection of magazines and posters (represented by a number of excellently designed stickers placed on 2×2 tiles). There are three minifigures, two exclusive, and of course the Dilophosaurus, also an exclusive – that is quite a lot packed into a seemingly small set.

The Dilophosaurus made its film debut way back in 1993 in the original Jurassic Park, famously spitting its poisonous venom into the face of the treacherous Denis Nedry. LEGO fans had to wait a lot later to get a minifigure scaled version of the prehistoric beast. This set marks the third variant and although it has lost articulation it is certainly the most accurate. The opening mouth and pose capture the menacing look of the dinosaur incredibly well.

As for the 75934 Dilophosarus on the Loose build, it is divided into two parts, one being Owen’s drone vehicle, which he uses to catch the escaped dinosaur. For a small vehicle there are quite a few interesting parts used within. The fuselage is a light bluish grey airplane engine, a variety of curved slopes are attached via plates with clips and handles, then rather smartly the rotor blades sit upon four large Technic steering wheels on each corner of the drone.

The colour scheme of light bluish grey and dark blue really work well together and the design is finished off with some Jurassic World logos on the side and rear tail. The chopper also features a really neat little play feature. A Technic axle with two 2×2 round bricks are placed through the middle of the engine, a net is stuffed into the front so when the back is pushed through it launches the web. For something so rudimentary, it actually works really, really well.

The drone is a fun little build but the highlight of the set is the gift shop and right from the start it’s clear this is a very smart design. The use of 1×2 plates with teeth, 1×2 curved slopes and 1×1 with a horizontal tooth make for a very effective looking lower jaw that instantly gives the build character and brings the stall to life.

Very few pieces go into the design, but each part is expertly used creating signs, hat stands and building up the four sides of the stall. What’s most impressive is the fact it’s packed full of detail and only built on a base thats six studs wide. The same technique used for the lower jaw is repeated for the roof of the stall but this time attached via a sub assembly made from a 4×6 wedge plate with cut corners. Plates with teeth are then added to the front to complete the top of the mouth, and in keeping with the rest of this build it looks utterly superb.

Even the stickers attached to the 2×2 tiles to represent gift books and posters look excellent with some great graphic design – the Raptor at sunset looks particularly effective.

Although the Park Worker is just an unnamed generic female she still features an impressive printed Jurassic World torso that will make for an excellent addition to the collection. Owen Grady comes in a variant that has been seen seven different times before with his printed leather vest, shirt and printed belt, still a well designed minifigure.

75934 Dilophosarus on the Loose is one of those great LEGO sets that seems simple but completely takes you by surprise by its excellent design. Two very smart and enjoyable builds that look excellent once finished, plus an exclusive and well designed dinosaur along with three minifigures make this a highly recommended set LEGO Jurassic World fans.

75934 Dilophosarus on the Loose is available now at LEGO.com. You can help support Brick Fanatics’ work by using our affiliate links.