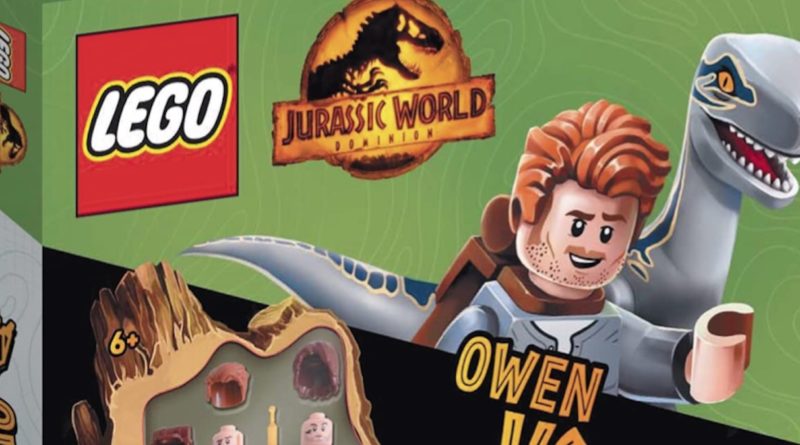 Publisher AMEET has a number of LEGO books due out this year, some with exclusive minifigures that will be the main reason collectors will be picking up the titles. Details of two upcoming LEGO Jurassic World Dominion books have now been fully revealed with listings for the titles providing a first look at the included minifigures.

LEGO Jurassic World: Alan Grant’s Missions is first out of the gate, with a 32-page book featuring puzzles, activities and comic stories for younger readers. The title also includes a minifigure of an older Alan Grant as he appears in the forthcoming Jurassic World Dominion. The minifigure has a bag, pickaxe, dinosaur egg and claw accessories and appears to be identical to the character included in the recently-released 76949 Gigantosaurus & Therizinosaurus Attack.

Also due out this year is LEGO Jurassic World: Owen vs Delacourt, a gift box set containing two trivia and activity books, with a double-sided 3D scene for play. The title includes minifigures of Chris Pratt’s Owen Grady and villain Rainn Delacourt, played in the film by Scott Haze.

The Owen Grady minifigure appears in both 76949 Gigantosaurus & Therizinosaurus Attack and 76945 Altrociraptor Dinosaur: Bike Chase, with the book version including a backpack, pistol and radio accessories. The minifigure of Rainn Delacourt isn’t exclusive to the title either and can also be picked up as part of 76945 Altrociraptor Dinosaur: Bike Chase. Accessories for the character are a tranquilliser gun and dart plus binoculars.