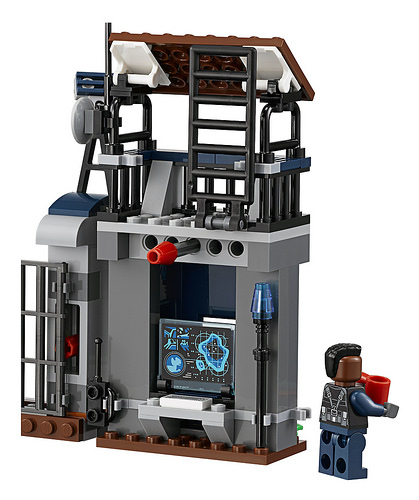 Poor value for money on the face of it, ingenuity in design rescues 75931 Dilophosaurus Outpost Attack from critical eyes

Indeed, where the range of sets released to tie in with the June film offer a plethora of dinosaurs both new and re-coloured in scenarios both new and re-imagined, few have truly captured the simplicity of dinosaurs loose in a park or urban environment running rampage and causing peril for the unfortunates in their way. It’s the set-up that defined Jurassic Park 25 years ago, and what should be driving Jurassic World as a franchise, but isn’t quite working in a number of the LEGO JW:FK sets released this year, and that’s in spite of individual strong points across each set. For one reason or another, releases such as 75929 Carnotaurus Gyrosphere Escape and 75930 Indoraptor Rampage at Lockwood Estate may offer fantastically designed creatures and large scale builds, but, as complete sets they lack true cohesiveness. The Carnotaurus in 75929 doesn’t marry well when put next to the tree and gyrosphere setting or the truck, whilst the Indoraptor and Velociraptor in 75930 will look just as relevant and at home in any Creator house as they do at LEGO Lockwood Estate.

And that’s where 75931 Dilophosaurus Outpost Attack is different, and where, in spite of its high price, it offers something that perhaps arguably only the £10 cheaper 75927 Stygimoloch Breakout can match – a simple yet cohesive play and display scenario. The set-up in 75931 is uncomplicated – three unnamed minifigures are manning a gate whilst also seemingly transporting an un-hatched dinosaur egg (or baby dinosaur, which you can swap in), as a Dilophosaurus is ready – presumably as the set name suggests – to attack. All you get is a fence, but, place the minifigures on one side of it and the Dilophosaurus on the other and the entire scene comes together. It is simple, but also plausible.

What makes this set-up work so well is the clear and clever design of the three-part modular fencing. With acknowledgement to the limited number of pieces available, it is simple to put together. Yet, at the same time, such thought has been put into its design that not only is it surprisingly robust (and ready for a Dilophosaurus attack, actually) but it also brings substantial size and play value into the LEGO Jurassic World: Fallen Kingdom line-up. It’s just a fence, but importantly it’s rather believable in scale, structure and design, particularly when put up against the included dinosaur. It makes for a basis of display and play that not a lot of the other location-based builds in this year’s range nor in the 2015 Jurassic World range can match.

Long flexible tubing makes for an effective main electrical barrier that measures 22 studs long, with three connecting towers that add height and thickness to the construction without compromising scale – it’s not too thin, nor too short. The watchtower is surprisingly brought together by quick details such as the recessed screen on the inside, and a sloped roof at its top, whilst the main gate has a robust nature and ‘built-deep-in-the-mud’ style to it thanks to a nice studs-not-on-top design at its base. Details across the three sub-builds such as the crane, the ladder and the lighting demonstrate how efficient the limited number of bricks included in 75931 Dilophosaurus Outpost Attack have been used.

Whilst the minifigures are notably nameless, they beef up numbers for those looking for more guards, and also offer collectors some very good diversity. Focus, though, is rightly pulled by the eponymous dinosaur included, the Dilophosaurus, which whilst of the same fantastic mould as three years ago, has been coloured as per its Jurassic Park appearance, making for a far more complete and desirable dino design. It’s one of the best in a range packed with new and re-coloured LEGO dinosaurs.

Ultimately, 75931 Dilophosaurus Outpost Attack remains an expensive purchase at £44.99, but, one that thanks to its design offers substantially better value for money than a number of the other sets in the LEGO Jurassic World: Fallen Kingdom line-up. Whether you pick this up at full price or not, this is a must-have set for Jurassic World and LEGO dinosaur fans alike. Be wary in considering waiting for a price reduction in case this proves to be the 75920 Raptor Escape of the 2018 range – in short supply and high demand.