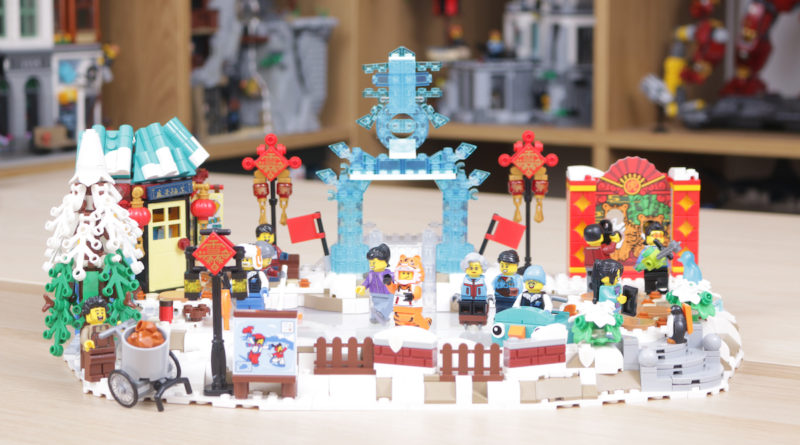 The LEGO Chinese New Year sets could have been nothing more than a cynical exploitation of a country’s cultural traditions, simply repackaged into LEGO form so as to make a quick profit on a burgeoning market for the LEGO Group.

Yet such is the care and attention that goes into the design of each of the sets released annually – and is the case again with 80109 Lunar New Year Ice Festival – these Chinese New Year sets serve as nothing but a celebration of their inspiration, and an example that we can only hope the likes of CITY and Friends can one day follow.

Reminiscent of 80105 Chinese New Year Temple Fair, 80109 Lunar New Year Ice Festival is a large, open display set that is packed with activity and characters, as a winter scene based around Lunar New Year celebrations is recreated across a frozen lake.

And it’s that lake that pulls focus from the moment you complete building the set – it genuinely looks cold to touch. Thanks to a selection of iridescent, semi-transparent 1x6x5 panel pieces, this is ice in LEGO form like we’ve not seen before – it’s a cool-looking, sparkly surface that is still able to reveal some hidden secrets underneath, through a cloudy transparency.

Iridescent plastic has been on the comeback trail of late for the LEGO Group and this is the best use of it so far.

The lake is the centrepiece to the entire LEGO set, so its brilliance shouldn’t be understated, nor the fact that the rest of the set is primarily in place to simply frame it. And a number of mini-builds do indeed frame it, but not one has been overlooked in design or detail, because every corner of the model has something going on, and plenty of minifigures to help tell the story.

Photography of the set will show much of that story, reflective of just how clever its design is, and how all the details included add real play and display value. These details extend into how the set is put together too, and all told it’s an experience older LEGO fans may look at the likes of CITY and Friends and wonder what could be.

The LEGO Group is clearly enjoying the challenge of the Chinese/Lunar New Year sets – faithfully capturing what are more specific insights into a particular culture. This more focused choice of subject matter lends itself to more nuanced details and storytelling, which altogether results in a more unique final LEGO set. What’s great to consider is how 80109 Lunar New Year Ice Festival is just one example of many sets within this theme that do just that.

Part of the appeal of 80109 Lunar New Year Ice Festival will of course lie in the massive line-up of 13 minifigures and, most particularly, in the skating tiger (to represent 2022 as the Year of the Tiger) and in the Ice Planet duo. They may only be earthbound folk wearing jackets with the old Space theme’s symbol on the front, but to fans of the 1990s Space subtheme, they clearly represent modern updates to some iconic minifigures.

They are the standout trio of minifigures that do honestly outshine the others, but for sheer quantity and variety, there’s little to complain about the selection that is included in 80109 Lunar New Year Ice Festival.

One challenge for the LEGO Group around the Chinese/Lunar New Year sets has been keeping their prices accessible – 80109 Lunar New Year Ice Festival is still an example of how the theme struggles to veer away from the more expensive end of things, but it’s an improvement and when considered within the context of what it offers as a LEGO set in comparison to other themes, its value does become clearer. Don’t let the price tag lead you, basically.

However, the LEGO Group treats the theme’s subject matter with respect and enthusiasm, wholly embracing the story elements and details that are unique to the Lunar New Year and incorporating them wonderfully into a fun and immersive LEGO set.

80109 Lunar New Year Ice Festival is a great display and play set packed with so much to enjoy and so many minifigures to populate it with. It’s yet another set from this subtheme that highlights how, with a higher budget and higher build age, something more special can be created, the likes of which CITY and Friends could follow if given the same creative freedom.

It takes roughly two hours to put 80109 Lunar New Year Ice Festival together, but it’s one to enjoy as we’ve not built anything quite like it before.

There are 1,519 pieces in 80109 Lunar New Year Ice Festival and a massive 13 minifigures too, including an ice-skating Tiger and two Ice Planet-inspired characters.

80109 Lunar New Year Ice Festival measures a massive 39cm wide and 25cm deep, and is tallest at the peak of the ice sculpture, 17cm high.