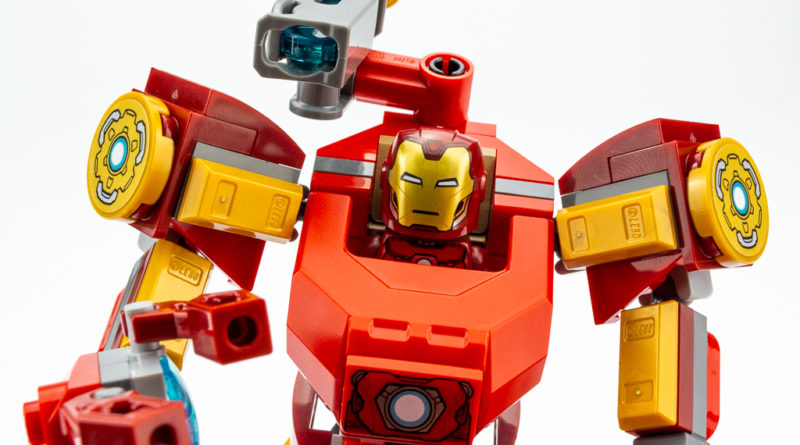 With Mech Thanos on the loose there’s only one Marvel superhero who might stand a chance against him. Obviously, it’s LEGO 76140 Iron Man Mech

As mechs continue to be popular at the LEGO Group (with previous sizeable models including LEGO Ideas 21311 Voltron and LEGO Marvel Super Heroes 76105 The Hulkbuster: Ultron Edition), it makes sense to offer some slightly less piece-intensive builds for a younger demographic.

76140 Iron Man Mech fits the bill nicely as part of a new Marvel sub-theme from LEGO offering some fun builds at a very reasonable price.

The Iron Man included is a very nicely designed minifigure that is currently exclusive to this set. His helmet has a printed facial plate, but unlike most LEGO Iron Man suits, doesn’t have a hinged opening to reveal Tony Stark’s face behind. Removing the helmet does reveal a double-sided head – one side the standard Tony Stark, and the other featuring his ‘Heads up’ display seen in the films.

The colour scheme is an attractive red, dark red and metallic gold, closely matching the assortment of pieces used in his mech. Printing on the torso and legs are highly detailed and continue to highlight how impressive minifigure printing can be.

The mech itself is a fairly straightforward build, but that doesn’t mean 76140 Iron Man Mech not enjoyable. There are some nice techniques used to build each part up separately before they get flipped around and connected to the next piece, making it fun to try and work out what you’re building as you go. The main issue I tend to have with any sort of robot/mech design is usually in the repetition. If there’s an arm and a leg, more often than not that means they come in pairs, so it can get a bit tedious, but given the overall simplicity and part count it’s not really an issue here.

The use of ball joints provides great articulation with poseability a strong attribute on this set. Most surprising for LEGO perhaps, is the rare inclusion of knee joints meaning we can finally have a genuflecting mech – much to the delight of Thanos, no doubt.

The hands make use of the mechanical arms from Exo Force/Bionicle as fingers and can be positioned freely allowing for grabbing. My only gripe with this part is the protruding wheel holder at the bottom. I don’t see why this couldn’t have been replaced with Plate, Modified 2 x 2 with Wheel Holder, that only has one wheel holder instead of two. With some minor modification this would be an easy part to swap out, but perhaps its inclusion was for a reason we’ll never know.

Iron Man can usually defend himself with his hand repulsors, but in this set you get a moveable shoulder cannon which allows for a cool missile-launching feature. Three round 1×1 tiles can be loaded at any one time, though it’s tricky not to fire them all at once. I didn’t find it to be quite as effective as spring launcher missiles, but it’s still a nifty little addition that adds an extra element of play.

Stickers are rarely a joy, and to get six in such a small set is a little annoying, though it’s hard to deny the overall aesthetic appeal once applied. On the plus side, we get a 1×2 cheese slope with a printed arc reactor which will no doubt come in very handy for some MOCers.

Overall I really like this set. Sitting alongside the pocket-money sets like the LEGO Star Wars Microfighters, these are designed to be impulse buys, providing consumers with short yet satisfying bursts of LEGO building for a quick fix. Perfect for when you don’t have time to start building your microscale 71043 Hogwarts Castle. With an exclusive minifigure and a decent selection of parts, this is likely to appeal to more than just KFOLs.

76140 Iron Man Mech is available now at LEGO.com. You can help support Brick Fanatics’ work by using our affiliate links.