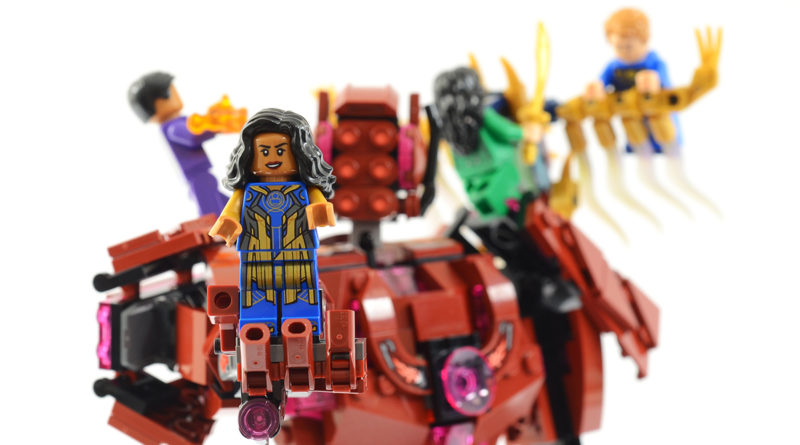 The long-awaited LEGO Marvel Eternals range has finally arrived, just in time for the movie’s theatrical debut – but can 76155 In Arishem’s Shadow set itself apart in a year dominated by Marvel mechs?

It’s Arishem, the only Celestial available so far in LEGO form, and the major build of the second-largest Eternals set. Let’s see how tall 76155 In Arishem’s Shadow stands for the Marvel fan, the mech fan, the minifigure fan, or simply the LEGO fan in general.

76155 In Arishem’s Shadow concentrates the vast majority of its parts into the eponymous Celestial. The set starts off with a small flying Deviant, however, whose fiddly little build results in a striking creature that compares quite favourably to those seen in Eternals’ trailers.

The opalescent blades used for the wings and tail look stunning, and though this is the smallest Deviant in any of the four Eternals sets, the unique Deviant colour scheme mixing five different colours still works well. Following the LEGO Group’s current standard for buildable creatures, the face/eyes are printed.

On to Arishem himself, and he cuts a striking figure. In broad strokes, the dark red, dark pink and transparent pink colour scheme looks magnificent, placed over an inobtrusive black frame. He features an eye-catching mix of angles and curves throughout, especially in the torso section.

Finished off with opalescent purple discs for feet, Arishem has an otherworldly look that stands out among the LEGO Group’s myriad other mechs, and would look good on display even for someone who has no knowledge of or affinity for the source material.

For Marvel fans, even without having seen the Eternals film yet, Arishem’s distinct head design with the six eyes will be instantly recognisable thanks to the first Guardians of the Galaxy, where he was featured in a prominent shot during The Collector’s exposition dump about the Infinity Stones.

That head is the most exciting and novel part of the build, being ingeniously built around six nozzle pieces in coral (with a spare included!). As a character, he’s sure to play more of a role in Eternals itself, becoming even more desirable to Marvel fans after watching the film.

Rounding out a discussion of his display-ability, we’ve said that Arishem looks great, but that’s only really true from the front. The long Technic bases of his feet really start to show from the side, and while he’s not the worst of LEGO mechs from the back, he’s not great there either. To be fair, those shortcomings are completely fine – if you’re going to display a mech, you only truly need one great side.

With an eye towards display, you’ll want to try to get the stickers lined up well, and Arishem relies on a lot of them for detail. The stickers on the pentagonal tiles on his thighs need particular attention, since the pattern is supposed to continue from one to another and even the slightest millimetre out of line can be noticeable.

In the playability department, the LEGO Group itself touts three major play features: light-up chest, ‘grabbing hands’, and stud-shooters on his hands. Stud shooters-make a tried and true bonus for kids who like them, and are easy to ignore for those who don’t.

Grabbing hands really amount to hands that can hold a minifigure standing up on the palm, but not truly grabbing with the fingers as other LEGO mechs have done. The light brick feels a smidge unnecessary. It hints at the fact that Arishem glows from the inside, but in execution the spread of the light is weak and doesn’t add much value.

Finally, there’s the playability at large given that 76155 In Arishem’s Shadow primarily consists of one giant action figure. Picked up in a hand, Arishem would surely play well, but unfortunately he does not pose all that well.

Though he has knees, the range of motion has been severely restricted. That’s hurt further by the design of his ‘feet’, which result in no dynamic poses of his legs really being possible.

The ratcheted joints at his hips cannot easily bear the weight of his upper body, limiting the extent to which he can lean without falling over. Thus, there’s only true articulation in his arms and head, which can move pretty freely.

We’ve done our best to push the boundaries of Arishem’s pose-ability, with frustratingly limited results.

Though everything included in 76155 In Arishem’s Shadow counts as a character, honing in on the minifigures brings us to a delightful selection. The minifigures truly shine across all of the Eternals sets, thanks in part to the varied and detailed character designs in-universe, and that the LEGO Group has pulled out all the stops to give each Eternal fully-detailed prints from the torso down through the toes, something often bemoaned as missing in the Marvel line.

The LEGO Group has placed half of the 10 Eternals in multiple sets, while the other five make only one LEGO appearance each. The two Eternals exclusive to this set are Ajak and Kingo, both highly-desirable figures for a number of reasons. From a purely minifigure-oriented perspective, they both include exclusive headprints on flesh tones other than light nougat, and they also have some of the most regal-looking outfits.

On the story side, Ajak is the Eternals’ leader, making her desirable, and outside of the story altogether these represent the first minifigures based on Salma Hayek and Kumail Nanjiani, both popular actors whose LEGO-fication will be a treat to their fans.

Sersi and Ikaris round out the minifigure selection, both positioned as primary characters in the film by the trailers. Ikaris is the most easily-obtained of all of the Eternals, appearing in three sets (including the smallest one, 76145 Eternals’ Aerial Assault), but he’s also the most flawed, a possible victim of early concept art. It’s especially ironic seeing him on the box art with his nougat hair and clean-shaven face in close proximity to the movie character, with black hair and a five o’clock shadow.

Sersi looks okay, though her face does not seem reminiscent of Gemma Chan, nor is her hairpiece particularly accurate. Her hair hasn’t appeared in that colour since 2017, however, so from a LEGO perspective it’s nice to get it again.

We have not seen the Eternals using much in the way of weapons besides Thena, who manifests them, yet the set includes four golden weapons (plus spares). The long blade originally made for Lord of the Rings Elves goes to Ajak in the instruction manual, but the rest do not get ascribed.

One lifestyle photo shows Sersi holding the golden sword originally made for NINJAGO’s Lloyd, while the sais remain a mystery. That’s not to say we’re complaining – LEGO accessories are welcome whether they make sense in the set or not, and chances are they may well do after seeing the film.

Given that Arishem himself measures nearly 30cm tall and makes a striking display piece, and taking into account the lovely Deviant and excellent minifigures included, the US price of $59.99 feels okay, despite a somewhat low piece count.

That said, light bricks sometimes increase a set’s cost and the one here does not add much real value, plus Arishem himself doesn’t feel very bulky, so even a slight discount to $49.99 would feel better. The price is sadly much worse in other regions, especially in the UK and Europe at £59.99 / €69.99, and thus waiting for a sale feels all the more warranted.

76155 In Arishem’s Shadow packs in a fair amount of value, whether you’re a Marvel fan first or a LEGO fan first. For the Marvel fan, this set includes the only Celestial the LEGO Group has made thus far, two exclusive minifigures of well-liked actors, and two other characters who appear to be prominent in the film. Arishem achieves an ethereal, other-worldly look, making the set a stand-out for display.

For the LEGO fan, it’s dark red galore, plus those wonderful blades used on the Deviant and fantastic minifigures that include two brand new and exclusive medium nougat heads.

As a toy, 76155 In Arishem’s Shadow has its flaws. The playability promised by the joints at Arishem’s hips and knees unfortunately falls short. Arishem does not look very good from anything but the front, which actually would be a problem more for play than display since you’re more likely to see his less favourable sides when playing with him. He also can only hold minifigures in one very specific way, rather than holding them easily.

All in all, for a large glorified action figure, a tiny though very nice side build and four minifigures, the price wherever you are could feel like just a bit too much – but for as little as 10-15% off, 76155 In Arishem’s Shadow would be a solid recommendation for all of the positives included.

How long does it take to build LEGO Marvel 76155 In Arishem’s Shadow?

It takes around one hour and 15 minutes to build 76155 In Arishem’s Shadow. The fiddly Deviant may take longer to build than expected given all the tiny parts, but it’s smooth sailing after that.

How many pieces are in LEGO Marvel 76155 In Arishem’s Shadow?

There are 493 pieces in 76155 In Arishem’s Shadow, which include lots of lovely dark red, a light brick, some exclusive minifigure parts, and opalescent parts for both Arishem’s feet and the Deviant’s wings and tail. If you’re a fan of dark red, this one’s for you!

Arishem stands tall at over 11 inches or 30cm, though his limbs are lanky for the most part.

How much does LEGO Marvel 76155 In Arishem’s Shadow cost?

76155 In Arishem’s Shadow is priced at £59.99 in the UK, $59.99 in the US and from €69.99 in the EU depending on country. It’s the second-largest Eternals set, and one of the more expensive sets in the LEGO Marvel line-up this year, but also unlike almost any other Marvel set the LEGO Group has produced.